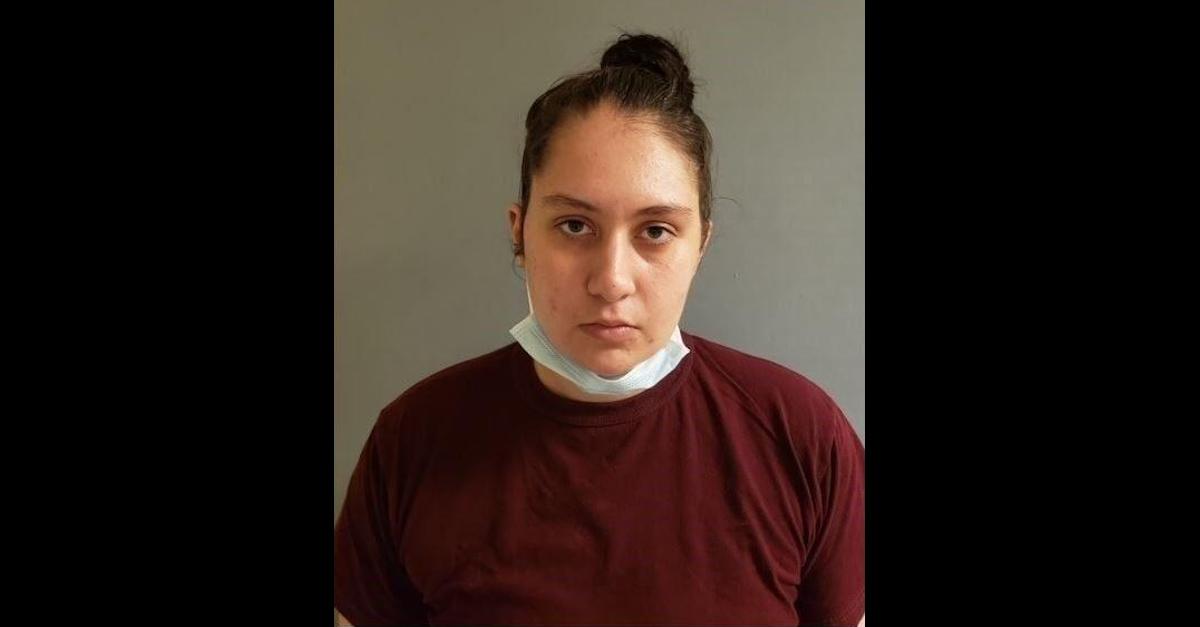 Connecticut authorities on Wednesday charged a young Enfield woman with two counts of murder in connection with the stabbing deaths of her grandmother and her grandmother’s boyfriend. That’s according to warrant documents filed in state court Wednesday afternoon, as well as a Facebook post from the Enfield, Conn. Police Department.

The defendant, Harlee Swols, 22, was arrested and charged with violating an order of protection Sunday night. The murder charges, which were anticipated as imminent, significantly increase the defendant’s legal jeopardy. She’s charged with two violations of Conn. Gen. Stat. § 53a-54a, the Constitution State’s murder law. But Swols attempted to argue that the deaths of the two victims she’s accused of killing came in part because one of them attacked her first — despite the legal reality that she was barred from being on the property where she’s accused of killing both of them.

According to Enfield Police Chief Alaric Fox an, initial incident report, and state court files, Swols was ordered to stay away from her grandmother after a July 7 altercation. Swols was charged with second-degree breach of the peace, a Class B Misdemeanor, and assaulting an elderly victim, a Class A Misdemeanor, in connection with what allegedly occurred on July 7.

An incident report surrounding the Sunday deaths of Swols’ grandmother, Mary Rose Riach, 72, and Riach’s boyfriend, James Samuel Bell, 63, described in graphic detail what is alleged to have occurred when Swols is accused of failing to heed the aforementioned judicial warning to leave Riach alone.  According to the report, a neighbor heard Riach calling for help. The neighbor called 911 to summon the police. When the police arrived, they discovered broken glass and saw Riach on the floor clinging to life.  They caught Swols exiting a shower “fully clothed but soaking wet with water and blood.” Officers held her at gunpoint, then took her to a squad car. They discovered Bell dead in a bedroom. Riach was rushed to a hospital in nearby Springfield, Mass., where she died shortly after arrival. Law&Crime previously reported the details of the initial incident report in detail on Tuesday.

A subsequent warrant affidavit filed Wednesday alleges additional, harrowing details in the alleged murder. The new document indicates that Riach suffered from “a large laceration across the front of [her] throat.” That “laceration extended from ear to ear, across the base of [her] throat.” Another “large laceration” was visible under Riach’s chin; small lacerations were visible above one of her temples and on her chest near her collarbone. A “large gash” was on the outside of one of her arms; a “small laceration” was on under her right armpit.

An autopsy conducted in Massachusetts, where Riach died, later “discovered 22 sharp force injuries through various areas” of Riach’s body. “[S]ome were slashes, and a couple were consistent with defensive wounds,” the warrant affidavit indicates. Riach’s “right jugular artery had been severed” in the process of the alleged murder, the document reveals.

Bell fared no better. His Connecticut autopsy revealed “approximately 30 stab wounds with depth and approximately 12 more superficial wounds spread out over the body.” Several “deep” and “gaping” wounds on Bell’s hands suggested that he tried to defend himself, the warrant affidavit indicates. The report continues by describing “approximately 5 stab wounds” on several superficial wounds on Bell’s head and face. Among them were “a gaping wound that was approximately 5 inches in length, going from the front area to the back-left area of the neck; that cut was approximately 1.5 to 2 inches in depth.”  Fourteen other wounds “with depth” were on the Bell’s back, shoulders, and on the back side of his head and neck.

Swols was arrested with injuries to her hands, “blood all over her clothes,” and “showing no signs of emotion.” She was wearing a red shirt and blue jeans, the documents indicate.

An Uber driver told the police that he accepted a fare request from Swols at 6:08 p.m. on Sunday. He picked Swols up outside a Staples office supply store at Brookside Plaza in Enfield at about 6:30 p.m.; Swols was wearing what he thought might be a Staples “uniform shirt.” Swols told him she needed to request multiple stops; the driver said Swols had requested only a one-way fare and would need to update her request in the Uber app.

“The first stop was to be the incident location,” the police summarized. “[T]he second stop was 97 Elm Street, and the third stop was going to be Gatewood Drive.”

The driver approached the front of the residence that would soon become a crime scene, but Swols told him to turn down a side street and “park by the rear parking lot of the residence,” the police again summarized. “She then got out of the vehicle and slammed his car door. He asked her why she had to slam his door and she apologized.”

The Uber driver watched Swols “go up a set of stairs that led to the second floor of the residence . . . she was wearing a red shirt and blue jeans and none of her clothing appeared to be ripped or damaged.”

When police found Swols, her jeans were torn “on the rear and all over the legs.”

And the Uber driver said Swols’ hands showed no signs of injury. And she made no claims she was hurt.

“[A]pproximately 4 minutes after the female went up the stairs, he heard glass shattering from the area at the top of the stairs where the female went,” the police affidavit continues. “He heard several things breaking and then heard a female yelling, “Help, Help.”  The screaming and the sound of things breaking lasted for approximately 5 minutes. Just as he was about to dial 911, Officers arrived on scene.”

The affidavit then recounts a police interview with the neighbor who called 911 at 6:34 p.m. to report the incident.

A detective who led Swols into a police interview room said her sneakers were soaked and were leaking a “wet liquid” which “appeared to be a mixture of water and a red blood[-]like substance” onto the floor of the police station. A blood-like substance was also on the right hip of the defendant’s jeans, on the “back of her right arm,” and “on both of her hands.”

The affidavit says Swols waived her Miranda rights and said she didn’t have trouble remembering things in general — until investigators started asking her what occurred at her grandmother’s house.

Swols told investigators that she was “invited” to her grandmother’s house “to pick up some belongings” and that “things got out of hand.”  When asked what specifically “got out of hand,” Swols “repeatedly stated that she didn’t know or that she could not remember.”

Swols admitted taking the Uber ride from Staples, her “place of employment,” and admitted entering the apartment where her grandmother and her grandmother’s boyfriend were present. From the police affidavit, verbatim:

Swols is in jail on a bail of $2 million in the double murder case she now faces.

Most murder convictions in Connecticut are punishable by imprisonment for 25 years to life, though there are exceptions for murders involving “special circumstances.” Under Connecticut law, a murder involving “two or more persons at the same time or in the course of a single transaction” qualifies as a murder involving “special circumstances,” and that type of crime is hypothetically punishable by “life imprisonment without the possibility of release.”

The court papers made public Wednesday do not indicate authorities have (at present) chosen the tactic of charging Swols with murder involving “special circumstances.” So, as currently charged, according to the documents, she faces 25 to life if convicted.

Read the arrest warrant affidavit below: