‘Soaking Wet with Water and Blood’: Police Say They Caught Woman Trying to Shower at Home Where Grandmother and Boyfriend Suffered Fatal Wounds 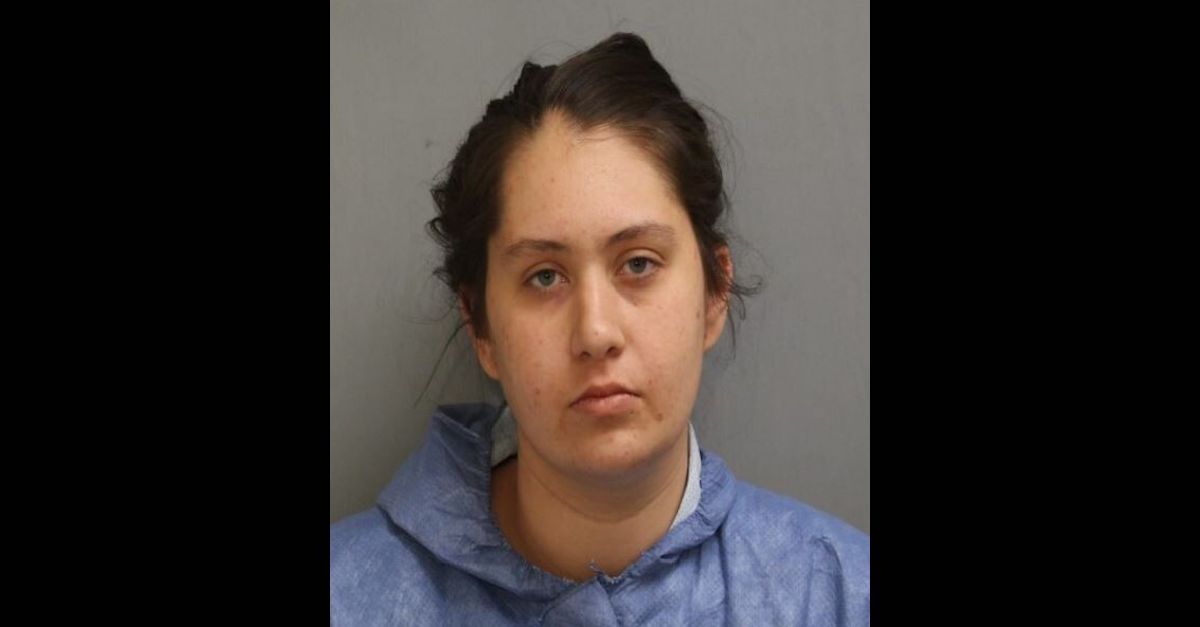 Harlee Swols appears in a mugshot released by the Enfield, Conn. Police Department.

A Connecticut woman is charged in connection with the deaths of her grandmother and her grandmother’s boyfriend Sunday night. Both victims were found fatally wounded in a home near the Massachusetts border.

Police in Enfield, which is the first town in Connecticut south of Springfield, Mass., along Interstate 91, say that a neighbor called them at 6:34 p.m. to report hearing sounds of a disturbance at 17B Alden Avenue. The neighbor wished to have the authorities check the well-being of the occupants of a residence on that street.

Enfield Police Chief Alaric Fox said at a news conference carried by several local television stations that officers entered the premises as a result of the call. One victim, since identified as James Samuel Bell, 63, was pronounced dead at the scene. The other, Mary Rose Riach, 72, died at Baystate Medical Center in Springfield, the chief said.

EPD is on scene of an incident on Alden Ave in Enfield. There will be a continued police presence for the remainder of the evening. The following area will be shut to pedestrian and vehicular traffic:

Officers found Riach’s granddaughter inside the home as well. According to warrants obtained by Hartford, Conn. CBS affiliate WFSB-TV, the granddaughter was covered in blood when authorities found her.

“The 22-year-old old granddaughter of the female victim has been arrested; at this point she is charged only with the violation of a protective order that had been issued in relation to an earlier dispute between the parties — that having occurred July 7, 2021, at that same address,” the chief said at the subsequent news conference. That disturbance, he added, was a “family disturbance of a — or at a — misdemeanor level.”

Court records indicate that the granddaughter, Harlee Swols, 22, was accused of a second-degree breach of the peace, a Class B Misdemeanor, and assaulting an elderly victim, a Class A Misdemeanor, on July 7. Bond was set at $2,000, and a future court appearance was scheduled for Aug. 28.

Chief Fox said Swols was not supposed to be at the location where Riach and Bell were killed.

The new charge lodged against Swols after Sunday’s incident is a Class D Felony for violating an order of protection. Her bail is currently set at $1 million. That case is awaiting a plea — also now scheduled for Aug. 28 at a courthouse in Hartford.

Additional charges are being discussed, the police chief added, but he did not say precisely what those charges might be or why the authorities were considering them. He refused to say precisely what caused the victims’ deaths, then explained that releasing any information might compromise the investigation being spearheaded by both his department and the Connecticut State Police.

A search warrant obtained overnight from Sunday into Monday resulted in an investigation that is primarily forensic in nature, the chief said. Officers also canvassed the neighborhood to find video and relevant information.

“The granddaughter was located inside,” Chief Fox said. “They [officers] met with her and discussed the matter with her briefly. She was detained; eventually she was interviewed back here at the police department.”

Those interviews led to the charge connected to the original protective order.

According to those documents, the neighbor heard someone upstairs “calling for help.” When officers arrived, broken glass was visible.

I walked up the stairs and saw that the first window on the top porch was smashed open and that there was glass all over the porch and stairs.  I continued up the stairs and saw a female lying in a pool of blood face down, but I could see her chest rising and falling. I began to kick in the front door to the residence and after several kicks I saw someone come out of a door into the kitchen area of the residence. Because of the scene and the condition of the victim on the floor, I pointed my firearm at the female and told her not to move. I could hear a shower running from the bathroom the female came out of and she was fully clothed but soaking wet with water and blood. I held the female suspect at gunpoint and had her get on her knees with her hands behind her head. The female suspect was compliant with my orders and [another officer] continued to kick in the door to get to the female victim.

Bell was located “near the bottom corner of the bed with a large laceration to his neck and stab wounds on his arms and back,” the warrant continued. He also had “a deep laceration from one side of his neck to the other and across the area of the artery.”

Riach suffered a “large laceration to the victim’s collar bone/neck area,” the warrant said. CPR would have been futile. EMS workers found a faint pulse, but Riach died shortly after arrival at the hospital.

The warrant continued by describing Swols after she was put in a police car:

Swols had wounds to both hands and they were covered in blood as well. Swols was wearing a red shirt and blue jeans, but the blue jeans had tears on the rear and all over the legs. Swols had blood all over her clothes and was showing no emotion at all when I first contacted her. Swols was not questioned and was only given medical attention by Enfield EMS for her hand wounds. I confirmed with Swols that she was not injured anywhere else.

According to the warrant, the authorities found no one else was in the residence.

The family of the victims released a statement to local reporters.

“They were just a couple enjoying their golden years,” it reads.  “They loved spending time with family, beach trips, and going camping. They had the biggest hearts of anyone I’ve ever known, and they did not deserve this.”

Editor’s note:  one day after the initial publication of this piece, the defendant was charged with two counts of murder.  Our discussion of the relevant arrest warrant affidavit is here.