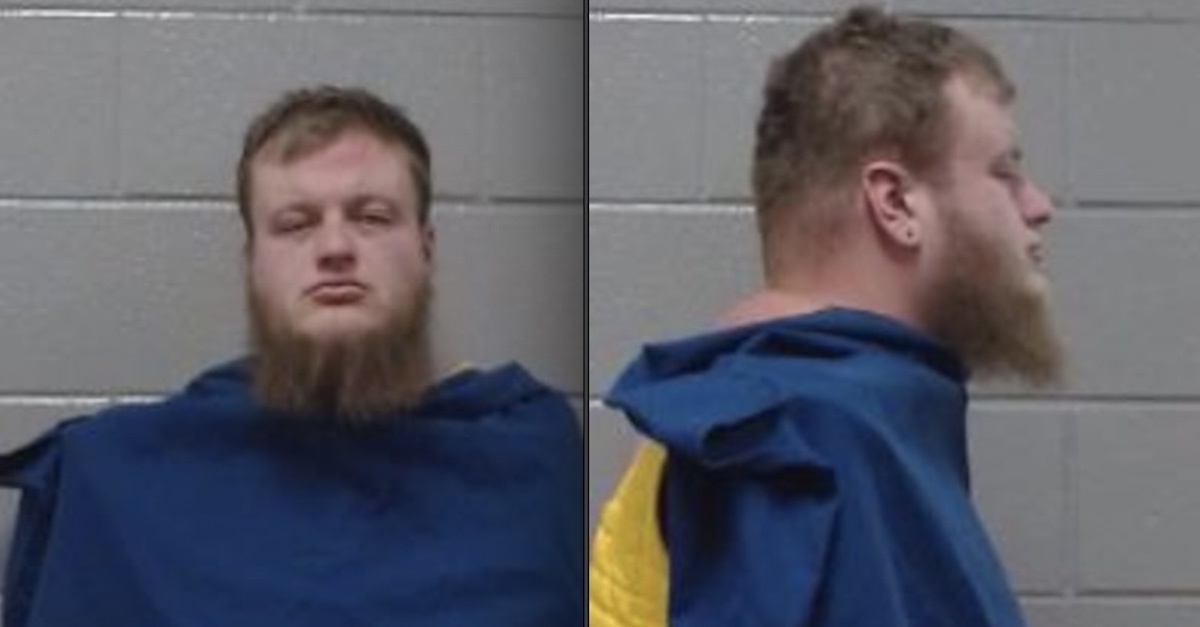 A father in Texas was arrested last week after authorities found his 2-year-old daughter was found dead and bleeding from the nose and mouth inside their family home nearly two years ago.

Garrett Lloyd Wayne Jos Gestes was taken into custody on Tuesday and charged with one count of abandoning or endangering a child in imminent danger of bodily injury in connection with the little girl’s death, court documents reviewed by Law&Crime show.

According to a probable cause affidavit obtained by Law&Crime, officers with the Wichita Falls Police Department at approximately 9:20 a.m. on Dec. 20, 2020 responded to a 911 call about a deceased female child at a home located in the 1600 block of Longview Street. Upon arriving at the scene, first responders said they were “instantly taken back by the smell of rotten food and general filth” inside the home.

“Officers observed the entire house was covered in spoiled food, dirty clothes, empty soda cans, and dirty dishes,” the document states. “The condition of the house was consistent throughout, to include the children’s bedrooms, kitchen, and bathroom. Officers noted blood was foaming from the victim’s nose and mouth, and was running down her right cheek. The victim’s death was considered suspicious.”

Investigators learned that Gestes and his wife had four children, a 6-year-old girl, a 3-year-old non-verbal autistic female, the 2-year-old victim, and a 2-month-old male.

Gestes allegedly told police that the whole family went out to dinner and came home at approximately 9 p.m. the previous evening. After arriving home, he allegedly said that all of the children, including the victim, were put to bed, while Gestes and his wife went to bed approximately five hours later and checked on the children intermittently.

Both parents allegedly claimed that the victim was not sick at the time of her death and had no underlying health conditions that would have caused her death.

However, in an interview with child specialists, the couple’s 6-year-old daughter allegedly told a different story, saying that the victim had been sick for days leading up to her death.

“The six year old claimed she found the victim in her bed with purple stuff coming from her mouth on the morning of her death. She also mentioned seeing the victim the previous night with purple stuff on her hands and around her mouth and neck,” the document states. “She also mentioned her dad (Gestes) was crying the night before because he was scared. She mentioned hearing a conversation between her mom and dad that they were both scared that something was wrong with the victim, but mom said ‘they’d see in the morning.’ The six year old said the victim was allergic to the purple medicine ‘because it caused her to have the purple stuff before.’ It appeared the six year old was referring to purple medicine making the victim even more sick and possibly having an allergic reaction to it.”

When Gestes and his wife were interviewed, their stories were “completely different from each other,” “even as far as what and where they ate lunch and dinner the day before,” police said. Gestes also allegedly admitted to lying several times, then refused to cooperate.

Surveillance video from a neighbor’s camera showed that on the previous night, Gestes’ wife left the home alone at 7:29 p.m. to have drinks at a bar with friends, the document states. She is shown returning home alone a little after midnight. Garrett allegedly left the house at approximately 7:53 p.m. with his 6-year-old and 2-month-old children, leaving the victim and her autistic 3-year-old sister home alone. At approximately 10:51 p.m., he and the children returned home. Records allegedly showed he was making delivery drop-offs for Door Dash.

An autopsy conducted on the victim came back as “undetermined,” police say, emphasizing that there were no signs of trauma or asphyxiation. A full toxicology report also failed to determine the victim’s cause of death.

Investigators concluded that a “prudent person wouldn’t leave an autistic, non-verbal, 3 year old child and a 2 year old child alone in a home with horrible filth including spoiled food and dirty clothes, unsupervised for nearly 3 hours, especially at night time,” the document states. Additionally, police said that a “prudent person would have sought medical treatment for the victim if [Gestes] and his wife truly thought she was sick and kept putting it off until the following day.”