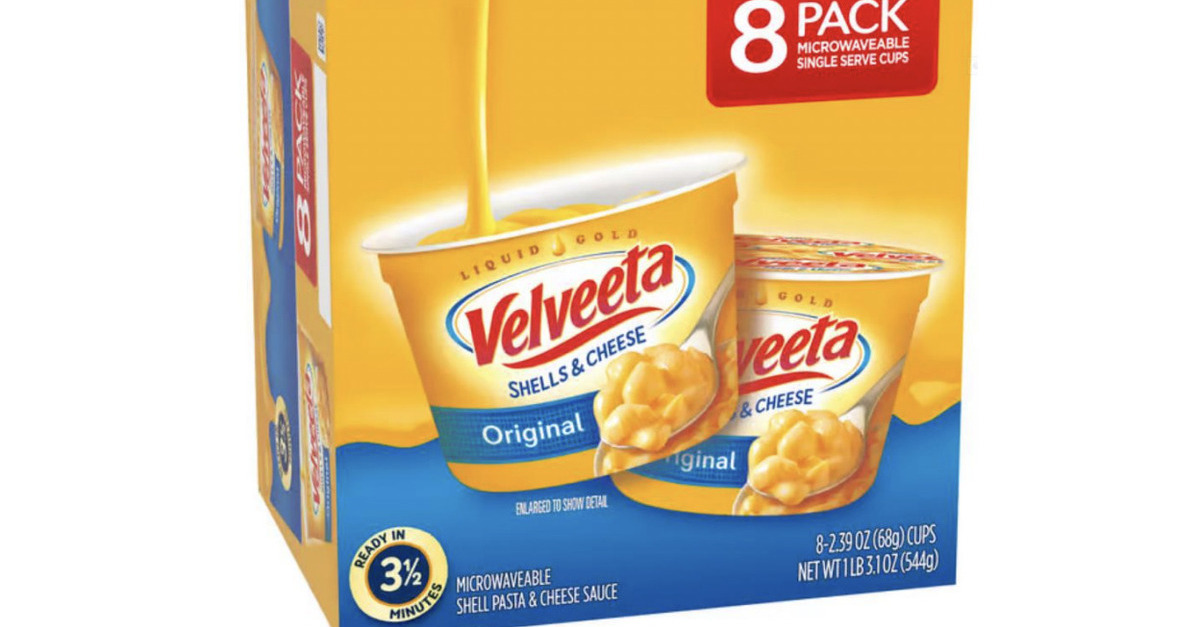 Packaging on Velveeta mac&cheese show above via court documents.

A Florida woman is waging a $5 million federal lawsuit against the makers of Velveeta microwaveable single serve shells & cheese, claiming that the label “ready in 3½ minutes” is false.

Days before the Thanksgiving holiday, Amanda Ramirez filed a class action lawsuit Kraft Heinz Food Company in federal district court in Miami over what she called a “deceptive” side dish. In Ramirez’s 16-page complaint, she claims that thousands of consumers have been defrauded by Kraft’s promises of quick meals.

The complaint alleges that while the product’s label shows the product will be “ready in 3½ minutes,” preparation of the product actually requires four distinct steps — just one of which takes the promised 3½ minutes.

Next, they must “ADD water to fill line in cup. STIR.”

Finally, they should “STIR IN contents of cheese sauce pouch.”

Defendant then notes that “CHEESE SAUCE WILL THICKEN UPON STANDING.”

Consumers were misled by expecting the mac and cheese to be “ready for consumption in a shorter amount of time than it really takes to prepare,” says Ramirez; as a result, she claims, Kraft Heinz sold more of the product at higher prices than it would have if the labeling had been honest.

According to the complaint, the mac and cheese in question “is sold at a premium price, approximately no less than $10.99 for eight 2.39 oz cups, excluding tax and sales, higher than similar products, represented in a non-misleading way, and higher than it would be sold for absent the misleading representations and omissions.”

Ramirez claims that the defendant company violated Florida’s Deceptive and Unfair Trade Practices Act, Consumer Fraud Act, and False Advertising laws. The plaintiff also made claims for state breach-of-warranty, negligent misrepresentation, fraud, and unjust enrichment. The complaint demands compensatory and punitive damages as well as attorneys fees — and estimates that these damages for the 100 plaintiffs in the class action exceed $5 million.

In 2021, another major lawsuit was filed against Kraft Heinz by three former Black employees. In that lawsuit, the plaintiffs asked for $30 million in damages for allegedly being subjected to a racist work environment at one of Kraft Heinz’s California plants.

Will Wright, attorney for the plaintiffs in the mac and cheese lawsuit, provided the following statement to Law&Crime via email Monday:

I’ve gotten a lot of flak about this case, but deceptive advertising is deceptive advertising. Here, Kraft charges extra for a desirable feature (saving time) but the marketing is false, it takes far longer for the product to be ready than as advertised. Deceptive adverting plain and simple. There are a lot of people that may feel this is just a little fibbing and not really a case and I get that. But we are striving for something better. We want corporate America to be straightforward and truthful in advertising their products. My firm also represents clients in what most would say are more compelling cases (arsenic in baby food, etc.) but we don’t feel corporations should get a pass for any deceptive advertising. The consumers deserve better.

Food mislabeling lawsuits have become increasingly become a thorn in manufacturers’ sides in the past year. Recent lawsuits have been filed against King’s Hawaiian, Texas Hot Sauce, and Barilla pasta all alleging that their products’ labeling misrepresented the origin of their respective foods.

Kraft Heinz did not immediately respond to request for comment.