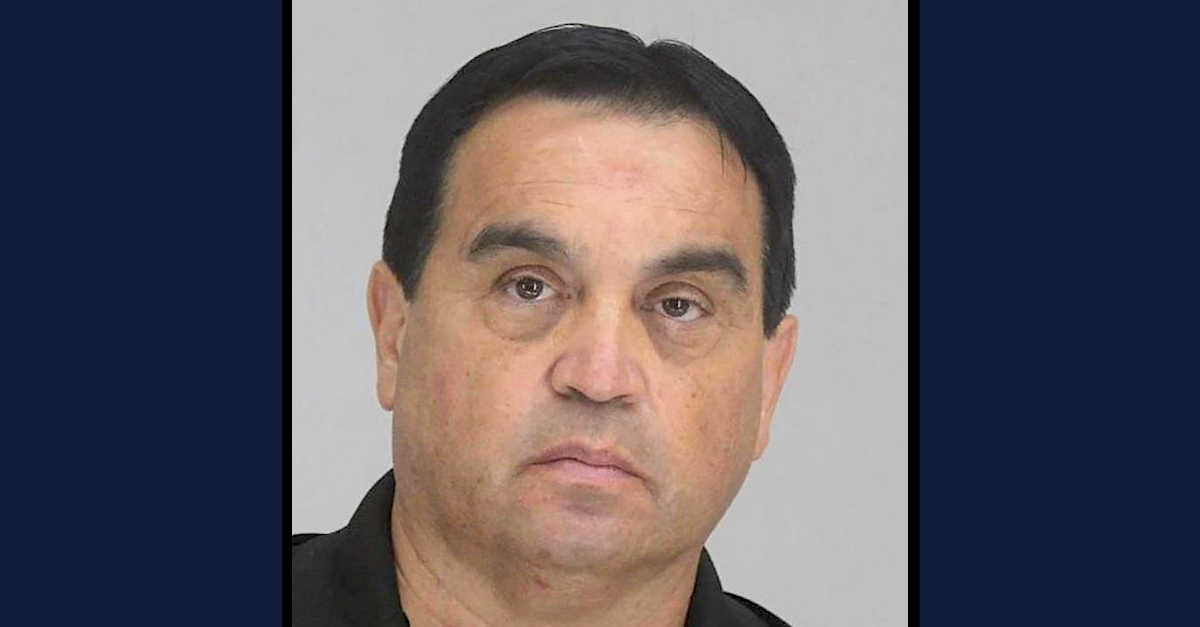 A Texas anesthesiologist with a history of professional discipline and several past brushes with the law has now been arrested for “allegedly injecting nerve blocking and bronchodilation drugs into patient IV bags at a local surgical center, resulting in at least one death and multiple cardiac emergencies,” the U.S. Department of Justice announced on Thursday.

Dr. Raynaldo Rivera Ortiz Jr. is charged with four counts via a criminal complaint: (1) tampering with a consumer product and tampering with a consumer product causing death and/or serious bodily injury (a violation of 18 U.S.C. § 1365(a)), the doing of an act that results in a drug being adulterated while held for sale after shipment of the drug in interstate commerce (a violation of 21 U.S.C. § 331(k)), intentional adulteration of a drug having a reasonable probability of causing serious adverse health consequences (in violation of 21 U.S.C. § 333(b)(7)), and adulteration of a drug by mixing or substituting another substance (21 U.S.C. § 351(d)).

Professional discipline papers on file with the Texas Medical Board say Ortiz was also arrested several times in the past on allegations that he abused women and shot a pet dog.

Prosecutors say one of Rivera Ortiz’s colleagues, a 55-year-old woman listed only by the initials M.K., “experienced a medical emergency and died immediately after treating herself for dehydration using an IV bag of saline taken from the surgical center” where the bags were tainted. That center was not named in the complaint; it was listed only as a “surgical center located in Dallas.” However, a Texas Medical Board suspension order regarding Ortiz’s license to practice medicine names the facility as Baylor Scott & White Surgicare’s North Dallas facility.

The New York Post identified the victim as Melanie Kaspar. The suspension order Kaspar she took the bag home to rehydrate “when she was ill.”

“She inserted the IV into her vein at home and almost immediately had a serious cardiac event and died,” the suspension order indicates.

Kaspar’s autopsy revealed a lethal dose of bupivacaine, “a nerve blocking agent that is rarely abused but is often used during the administration of anesthesia,” the DOJ indicated.

The incident involving Kaspar occurred “on or around” June 21, according to the DOJ. On Aug. 24, another incident involving an 18-year-old man identified only as J.A. occurred. That incident was described as a “cardiac emergency during a scheduled surgery.”

“The teen was intubated and transferred to a local ICU,” the DOJ said. “Chemical analysis of the fluid from a saline bag used during his surgery revealed the presence of epinephrine (a stimulant that could have caused the patient’s symptoms), bupicavaine, and lidocaine.”

A subsequent investigation “suggested a pattern of intentional adulteration.” A total of 10 “unexpected cardiac emergencies” had occurred during “otherwise unremarkable surgeries between May and August 2022,” prosecutors indicated — an “exceptionally high rate of complications over such a short period of time.”

In each of those cases – which investigators believe occurred on or around May 26 and 27; June 27; July 7, 15 and 18; and Aug. 1, 4, 9 and 19 – medical personnel were able to stabilize the patient only through use of emergency measures. Most of the incidents occurred during longer surgeries that used more than one IV bag, including one or more bags retrieved mid-surgery from a stainless steel bag warmer.

According to an affidavit, federal authorities learned that Ortiz was told of a disciplinary probe which alleged that he “deviated from the standard of care” just two days before the incidents began.

The affidavit says Ortiz was “expressed his unhappiness” with that disciplinary probe and suggested to a “fellow doctor that [the surgical facility] was trying to ‘crucify’ him.”  Ortiz also complained to a managing doctor at the facility that losing work would be “devastating” to him financially, according to the document.

In one instance, a U.S. Food and Drug Administration special agent wrote that a nurse reported to federal authorities that Ortiz refused to use a certain IV bag she presented to him during a surgery.

The document also alleges that surveillance video suggests Ortiz was personally placing IV bags into a warming device where they were generally stored:

Surveillance video shows that, on August 4, 2022 at or around 11:35 a.m., ORTIZ exited Operating Room 5 and walked toward the warmer with an IV bag in his hand. No one else is visible in the video from the OR Hall at this time. In the footage, ORTIZ walked slightly past the warmer, then turned and quickly placed the IV bag into the warmer. After he placed the IV bag in the warmer, he looked both directions in the OR Hall and then quickly walked away. A short time later, ORTIZ opened the warmer and looked inside, then quickly closed the warmer.

A patient suffered an emergency complication an hour later, the affidavit says:

T.Y., a 56-year-old female, was in Operating Room 1 for a scheduled cosmetic surgery at or around the same time that ORTIZ placed the IV bag in the warmer on August 4. At or around 12:11 p.m., video shows a nurse obtaining an IV bag from the warmer for T.Y.’s surgery in Operating Room 1. Surveillance video shows that no other staff member accessed the warmer between the time ORTIZ accessed the warmer and the time that the staff member obtained the bag at 12:11 p.m. After that IV bag was placed, T.Y. developed severe hypertension and cardiac arrhythmias at or around 12:50 p.m. She was given emergency treatment and transferred to an emergency facility.

A similar pattern repeated itself on Aug. 9, 2022, the affidavit indicates:

On August 9, 2022, at or around 10:19 a.m., surveillance video shows ORTIZ exiting Operating Room 5 with an IV bag in his hand. The OR Hall was empty at the time. ORTIZ walked to the warmer and quickly placed the IV bag in the warmer.

J.E., a 78-year-old male, was in Operating Room 4 for a scheduled wrist surgery at or around the time that ORTIZ placed the IV bag in the warmer on August 9. At or around 10:54 a.m., a staff member exited Operating Room 4 and retrieved an IV bag from the warmer. Surveillance video shows that no other staff member accessed the warmer between the time ORTIZ placed the IV bag in the warmer and the time that the staff member obtained the bag at 10:54 a.m. Medical records reflect that J.E.’s blood pressure spiked at or around 11:02 a.m. Emergency measures were employed, and J.E. was transferred to an emergency facility.

Similar patterns were allegedly caught on video on Aug. 19 and Aug. 23.

“ORTIZ’s behavior as described in the preceding paragraphs—according to information received during the investigation—is alarming and unusual,” the FDA special agent wrote in an affidavit.

“[T]here is a direct and likely correlation between ORTIZ placing IV bags in the warmer and the incidents under investigation in which patients other than ORTIZ’s patients experienced severe adverse medical events,” the affidavit continues.  “There also appears to be a likely correlation between ORTIZ coming under scrutiny for medical errors and the adverse events affecting other anesthesiologists’ patients at Facility-1.”

Ortiz’s disciplinary history says he was arrested for allegedly assaulting a spouse in June 1995. A “second female” sought a protective order against him in September 2005, the paperwork indicates, and another domestic violence arrest occurred in December 2014 “involving a third female victim.” That latter woman filed for a protective order against Ortiz in January 2015, according to the Texas Medical Board. In June 2016, a Collin County jury convicted Ortiz of cruelty to a non-livestock animal — namely, he “shot his female neighbor’s pet dog in retaliation for helping the third female victim of domestic violence escape him and testifying against him at the protective order hearing,” according to the medical board’s paperwork.

An appellate record of the shooting of the dog says the animal survived after emergency treatment. It also says the shooting occurred after sounds of a “very loud sports car” were heard; Ortiz was said to have owned “three or more Corvettes.”

Baylor Scott and White Medical Center-Garland “administratively suspended” Ortiz’s privileges for 14 days “for his failure to notify the hospital of the misdemeanor criminal charges,” the medical board noted in an earlier decision connected to the shooting.

Principal Deputy Assistant Attorney General Brian M. Boynton said in a statement regarding the new federal criminal charges that the “safety of the nation’s pharmaceutical supply is critically important” and that the DOJ would “vigorously prosecute this case.”

“Our complaint alleges this defendant surreptitiously injected heart-stopping drugs into patient IV bags, decimating the Hippocratic oath,” said U.S. Attorney Chad E. Meacham for the Northern District of Texas. “A single incident of seemingly intentional patient harm would be disconcerting; multiple incidents are truly disturbing. At this point, however, we believe that the problem is limited to one individual, who is currently behind bars. We will work tirelessly to hold him accountable. In the meantime, it is safe to undergo anesthesia in Dallas.”

The complaint and affidavit are both embedded below; Ortiz’s history of discipline and most recent suspension order follow.