Cincinnati Teens Shoot, Kill One Another During Argument

Teens Who Fired Guns During Fourth of July Argument Ended Up Killing One Another and Injuring Others, Police Say 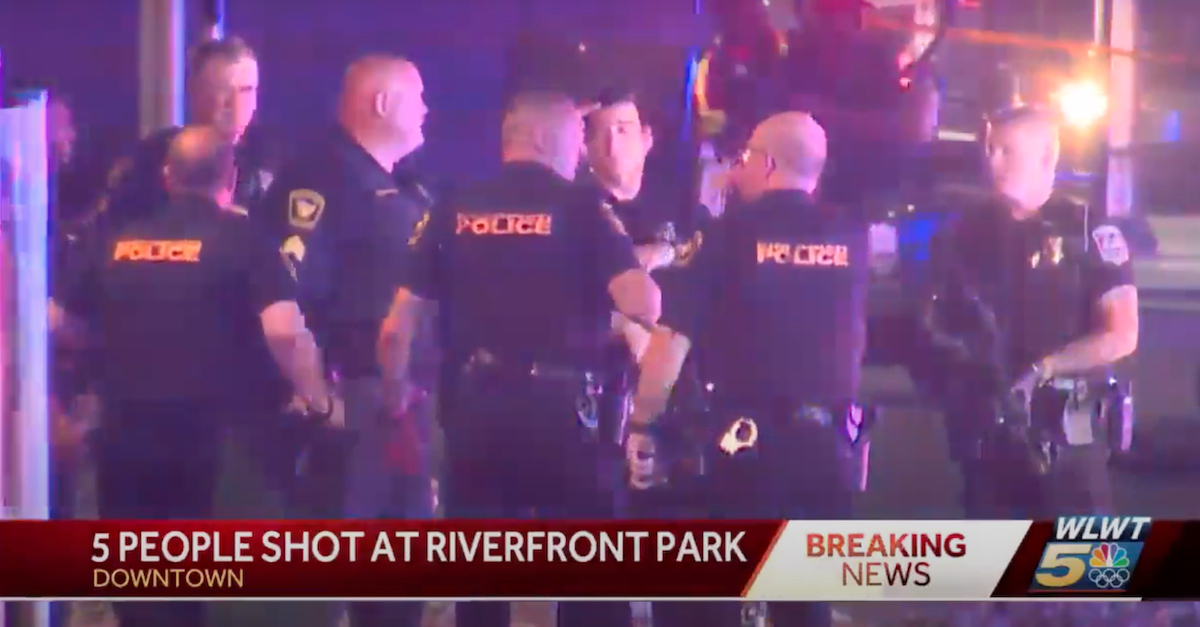 Two teens who pulled guns on one another and then pulled their respective triggers during an argument ended up shooting and killing one another, according to Cincinnati Police Chief Eliot Isaac on Monday.

The location of the altercation was Smale Park, a popular riverfront location in the city. The date was the evening of the Fourth of July — around 10:48 p.m., to be precise. The Cincinnati Enquirer noted that “issues” had been “increasing for about a year” at that popular place.

Col. Lisa Davis on Sunday night described the area as a “big, complicated scene” where between 400 and 500 people were present when the gunfight occurred. The Cincinnati Reds had just beaten the Chicago Cubs and subsequent fireworks had just wrapped up when the shots rang out.

Brian Hamrick, a reporter with Cincinnati NBC affiliate WLWT, called the incident a “mass shooting at a mass gathering.” He noted that the sheer size of the crowds made it difficult for first responders to reach the injured parties. Police had to apply a tourniquet to one of the victims while waiting for paramedics to arrive. Ashley Kirklen, also of WLWT, said the scene was “chaotic” and that one of the victims was taken to the hospital in an officer’s squad car because the victim had only minutes to spare. One of the victims was located immediately behind Paul Brown Stadium, the home of the Cincinnati Bengals, the station reported.

Capt. Steve Saunders of the Cincinnati Police Department told gathered reporters Sunday night that criminalistics efforts — evidence retrieval, photographing, diagraming, etc. — would probably take until Monday morning to complete. He asked witnesses to come forward if they had information — including by sharing video which might show what occurred.

“It’s a holiday weekend,” Davis said while noting that the department always has additional officers on standby given the reasonable expectation that large crowds are likely to be out celebrating. She noted that more than fifty officers were at the park to handle the case.

Milo Watson, 16, and Dexter Wright, Jr., 19, are both dead. One of the teens died at the scene; the other died at the hospital.

Three other teens were injured. A girl, 17, was shot in the back and was reportedly in critical condition; two boys, 15 and 16, were both shot in the arm.

By Monday, WLWT-TV reported that 78 officers were part of the investigation by the next day.

Isaac, the police chief, said “there is a potential” others may have been involved.

“Sixteen-year-olds, fifteen-year-olds should be able to come to a park on a given evening, a holiday weekend, and not have to be subject to gunfire.”

Cincinnati Chief Eliot Isaac said police are not looking for anyone by name, and that the two males killed appear to have fired shots during an argument. ⁦@Enquirer⁩ pic.twitter.com/Fn9saG2I5c

The families of the two primary suspects, Watson and Wright, generally did not respond to questions about what had occurred, but a family member related to Wright posted on social media that the deceased teen “should have made it home last night, but didn’t,” WLWT reported.

Police said they did not recover any of the weapons used.

Watson was an eleventh-grade student.

[image via screengrab from WLWT-TV/YouTube]