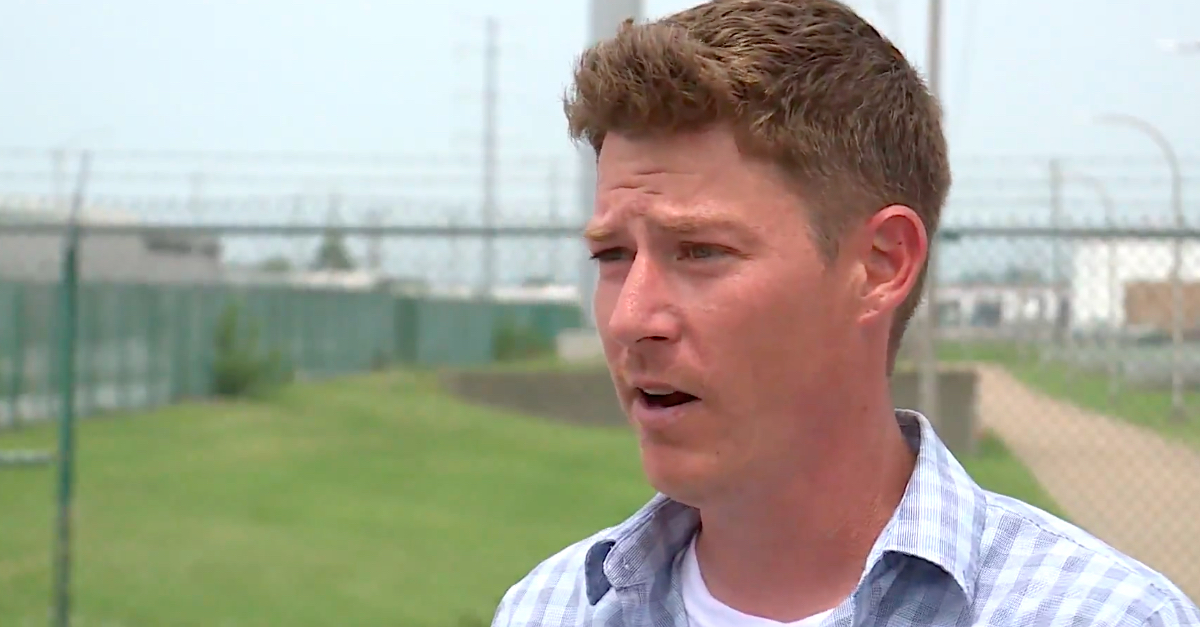 A Missouri man who in 2001 was convicted of a felony after he killed a chimpanzee that escaped from a neighboring compound had his conviction expunged after 20 years, St. Louis-based FOX-affiliate KTVI-TV reported Friday.

According to the report, Festus, Mo. resident Jason Coats, 37, will no longer have to deal with the “former felon” moniker that has plagued him since he was only 17 years old and he fatally shot one of three chimpanzees which escaped from the recently-disbanded Missouri Primate Foundation on April 19, 2001.  The facility housed more than 20 of the animals at the time. Coats, who was returning from a run to a local Dairy Queen with two other friends, has always maintained that the shooting was “absolutely in self-defense” because “three chimpanzees were trying to attack us.”

“They threw my dog across the back yard and I tried to scare them off. They ran up, chased us back to the car, did $1200 damage to the car trying to get into it after us,” Coats told the television station.

Coats’s friends corroborated his testimony during an ensuing trial, saying they were “terrified” after one of the large male chimp escapees named Coco bared his teeth at the teens and began pounding on the windows of their car.

“[Coco] was banging really hard, and I didn’t know if [the car window] was going to break or not,” Amanda McCullough, who was driving the car, testified during his trial, according to a report from the St. Louis Post Dispatch.

Kenny Rike, who was also in the car, said the chimp Coats shot was trying to fight his dog, calling the scene “crazy” and “like nothing I ever saw in my life.”

Coats testified that he ran inside his home and grabbed his 20-gauge shotgun to help his friends. When he came back outside, they told him one of the apes was fighting his dog in the front of the house. When he reached the front of the house, he said that the chimp, named Suzie, turned toward him. Fearing she was about to charge, he fired three times, killing the animal.

However, one of Coats’s neighbors testified that the chimp was sitting peacefully and Coats shot it in the back. The jury found Coats guilty of felony property damage and misdemeanor animal abuse. He was sentenced to 30 days in prison plus a fine. According to court records, the fine appears to have been suspended, but those same court records indicate that Coats was ordered “as an additional special condition of probation” to “hand-write a letter of apology and explanation” to both Suzy’s owners and to “each person who has written to the court expressing their outrage and disgust at defendant’s behavior.”

Since that judicially ordered flurry of forced penmanship, the Missouri Primate Foundation increasingly became the subject of community backlash, with chimps escaping at least three additional times, most recently last July, per KTVI. A state judge on Thursday issued a court order directing that the complex be disbanded after court records documented that the animals were living in horrid, waste-filled conditions. The order, which also directed that the chimps be seized by U.S. Marshals, was the result of a lawsuit filed by People for the Ethical Treatment of Animals (PETA). The six remaining chimps were transported to a wildlife sanctuary in Florida.

Jared Goodman, a lawyer for PETA, apparently didn’t get into the details of the Coats dilemma when asked about the matter by KTVI. Rather, he pondered the bigger picture.

“It’s a difficult situation, but it just goes to show you the importance of ensuring that these chimpanzees are held in an adequate environment and don’t have the opportunity to escape,” Goodman said. “Frankly, we’re very lucky about Mikayla and the other two chimpanzees who escaped their enclosures [in a separate incident] last year didn’t end up the same way that Suzie did.”

Coats was quick note that the closure of the chimpanzee containment complex just happened to coincide with the rubbishing of his court record.

“Being a felon holds you back in a lot of different ways, and you know, I just always had to put a mark on an application. It keeps you from doing government jobs and lots of different things,” he said.

“I think it’s kind of poetic justice it happened back to back within days,” he told KTVI.