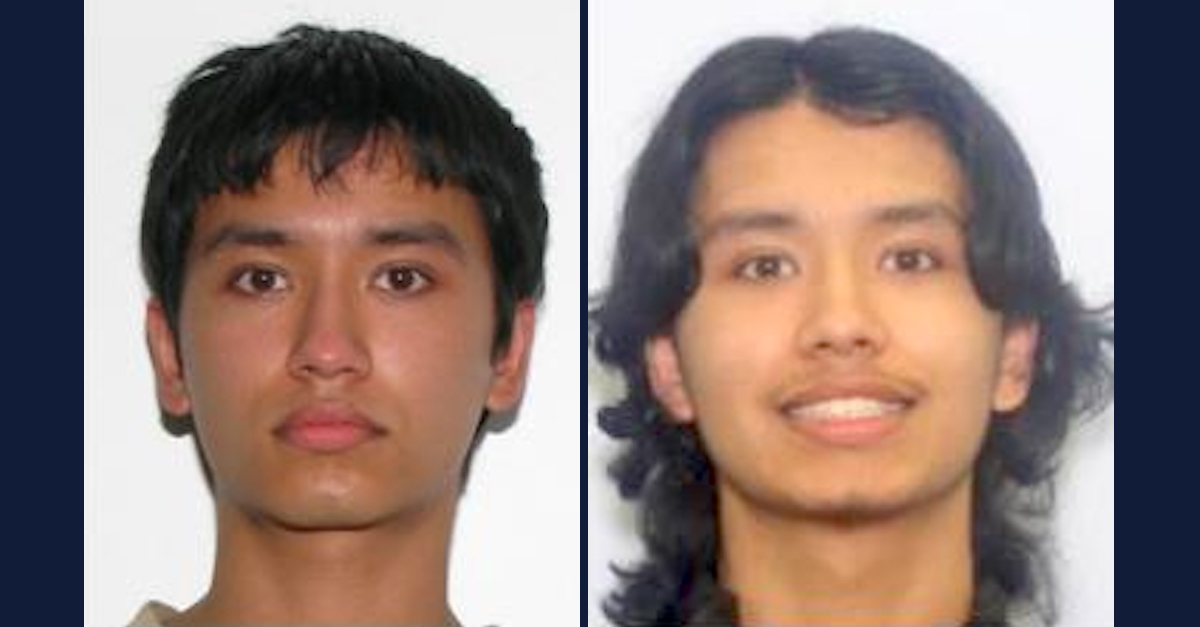 The person suspected of pulling the trigger in a series of sniper-style shootings on Friday afternoon in Washington, D.C., killed himself in his apartment, the Metropolitan Police Department announced late in the evening.

That department described Raymond Spencer, 23, of Fairfax, Va., late Friday as a “person of interest in connection to the shooting in the 2900 block of Van Ness Street, NW.”  Though the police did immediately confirm that Spencer was the person found dead in the apartment, Washington, D.C. FOX affiliate WTTG said that the police later confirmed to its reporters that Spencer was the person found dead; the Daily Beast also made the same connection.  Official confirmation, however, remains pending.

As dozens of gunshots rang out starting at around 3:20 in the afternoon, the MPD asked residents in the Cleveland Park and Van Ness areas to “shelter in place.”

MPD Assistant Chief Stuart Emerman asked Spencer to turn himself in on Friday. Emerman said “social media things” drew the department’s attention to Spencer; the chief added that the MPD wanted to “have a conversation” with Spencer to determine the extent of the suspect’s involvement in the barrage of gunfire.

Bullet holes were visible in windows up and down a D.C. street and in a car, the police said earlier; they said it was “very possible” those bullet holes were linked to Spencer.

Reuters reported that Spencer was identified from video posted on social media “that appeared to show gunshots fired from the vantage point of an upper-floor window, with the misspelled label: ‘Shool shooting!'”

The incident occurred near the Edmund Burke School, an elite prep school in what Reuters described as D.C.’s “upscale Van Ness neighborhood.”

Washington, D.C. ABC affiliate WJLA and CBS affiliate WUSA both independently obtained and posted the video online; it appears to show dozens of bullets being fired in fast succession from the perspective of a camera which may have been mounted on a gun. 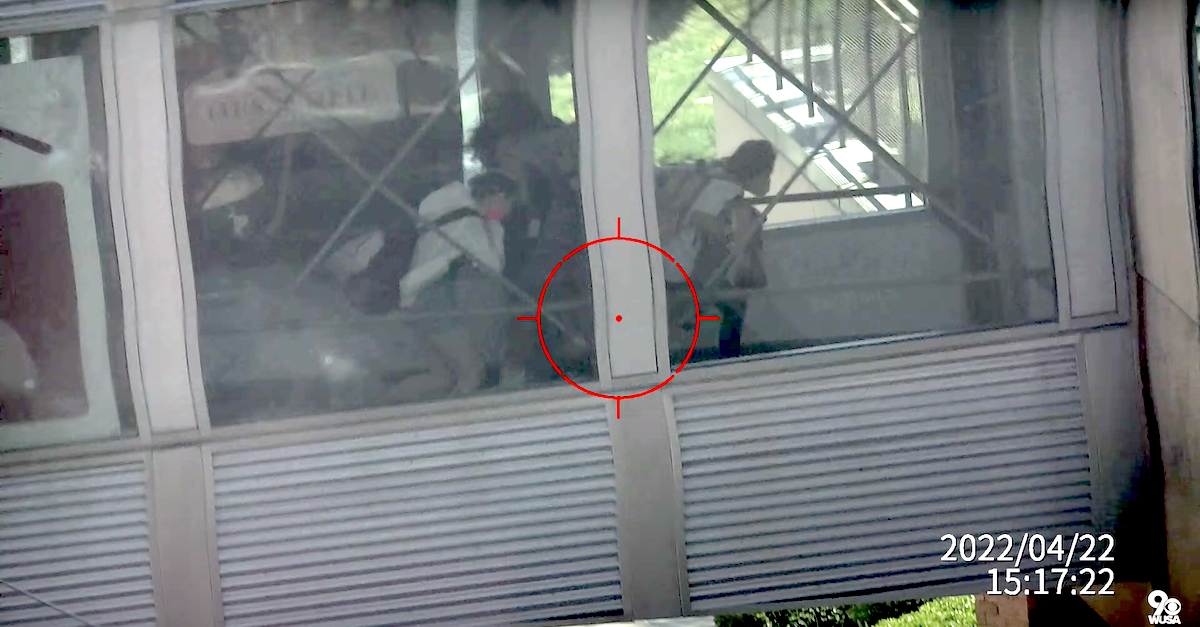 A video posted to 4chan by Raymond Spencer shows a barrage of gunfire and fleeing students through the windows of a nearby school. (Image via WUSA-TV screengrab.)

The video, said by WUSA to have been posted to 4chan, depicts “more than 60 gunshots over 19 seconds,” according to the television station.  The shooter appears to have reloaded once while dispatching the barrage of bullets into windows at the school and onto the streets.  Bullet holes and fleeing students could be seen in freeze frames taken by the television station from the disturbing and shaky recording; a man in a bright yellow safety vest could also be seen ducking between a sedan and an SUV.

A woman in her 60s sustained a “graze wound” to the back, Emerman continued.  That woman identified herself as Patricia Termini to local reporters.  She said she was grazed despite ducking down in a car after hearing what she described as “explosions.”

VIDEO: Just interviewed the fourth victim in the shooting. She was grazed in the back as she was waiting to pick up a kid in the alley. She explains what happened to me. @wusa9 pic.twitter.com/iVaijYhtwD

Three other victims — a 54-year-old man, a woman in her mid-30s, and a 12-year-old girl who was shot in the arm — were all in stable condition as of Friday, Emerman also said.  The male victim was a retired MPD officer, the police confirmed later on.

7:54 pm Update: There are 4 total victims in this shooting incident. 2 adult females, 1 adult male, and a juvenile (12 year-old) female. The additional adult female victim is in her 60’s and suffered a graze wound to the back.

Mayor Muriel Bowser said students at the school were unified with their families on Friday.

“People were unnecessarily shot in our community as a result of a senseless act of violence,” he continued.

4.22.22 DC officials provide the third update on a shooting in the 2900 block of Van Ness Street, NW https://t.co/ngVtxjOjRz

“We believe that the suspect took his own life as MPD members were entering or breaching the apartment where the suspect was located,” Contee said.

The chief did not directly confirm the identity of the person who took his own life because he said family members needed to be notified of the person’s death.  However, he said his department had abandoned efforts to locate Spencer.

The chief did confirm that authorities found more than six firearms, including “several long guns,” hand guns, and “multiple, multiple rounds of ammunition” inside the suspect’s apartment. 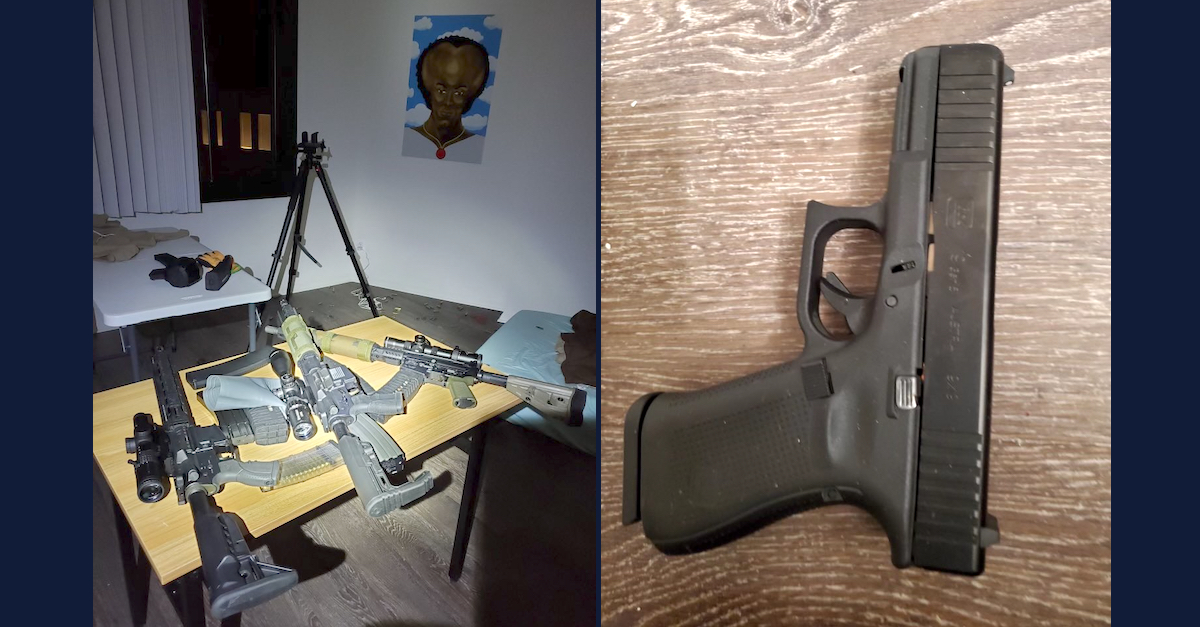 Contee added that the video which purported to show the shooting “looks very much to be authentic,” but he was not sure whether it was streamed live or whether it was uploaded after it was recorded.

The chief said eyewitnesses helped officers locate the gunman’s “sniper-type setup” on the fifth floor of an apartment building.

“His intent was to kill and hurt members of our community,” Contee said of the suspect; he added that the suspect is believed by the authorities to have acted alone.

The suspect has been located deceased inside of a residence in the area of Conn Ave and Van Ness St, NW.

The shelter in place has now ended.

The victim were selected at random, the chief indicated, as “they were going about their business.”

“We will get to the bottom of this; we will find out what the motive is,” Contee said.  “Right now, we do not have that answer.  But the answer that we do have is that our communities are now safe, and they are safe because of the swift work of police officers.”