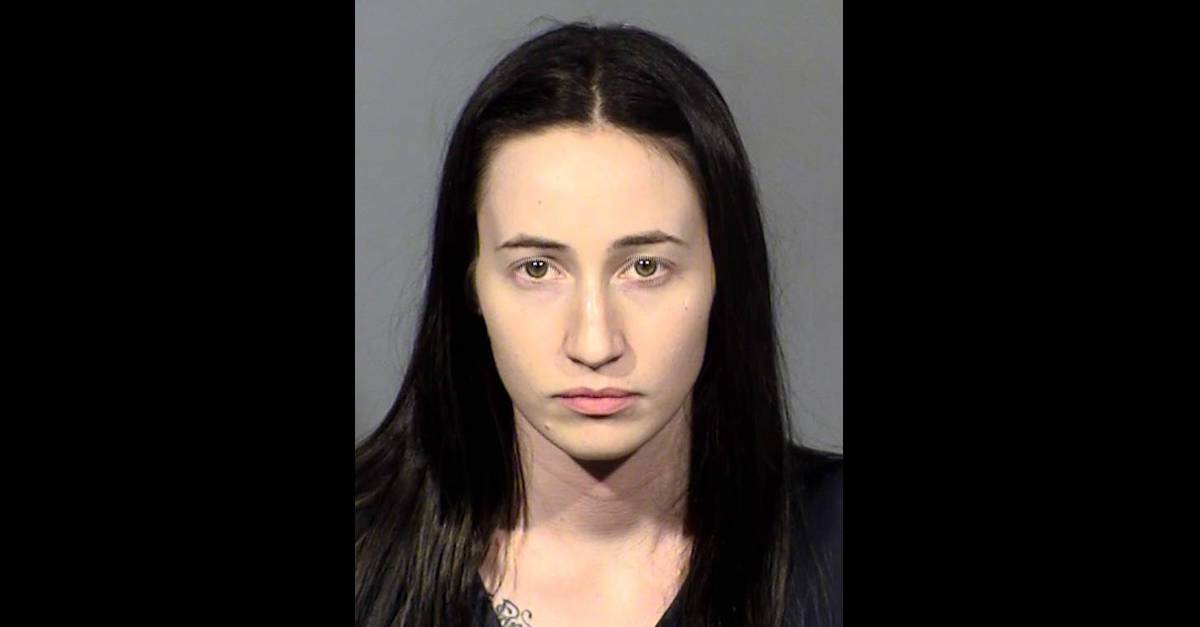 A Las Vegas babysitter faces nine counts for allegedly killing a five-year-old child by beating him so severely that she fractured his skull and caused bleeding in the boy’s brain. The victim, Ryan James Peralto, also suffered “damage to his spleen, liver, pancreas and intestines,” KLAS-TV reported.

Citing police records, KLAS reported that home surveillance cameras captured the attack — and that Courtney allegedly didn’t seem to care. She told the police she knew the cameras were present; in fact, she said the boy’s father installed three such recording devices in his home. The father, Kaiea Peralto, placed the cameras after his daughter, age 7, said Courtney was hurting her brother, Ryan, the victim.

When cornered by police, Courtney tried initially to blame the boy’s father, the local reports indicate.

“Officers were able to view video surveillance on an app from Kaiea’s phone,” reads a police report cited by KLAS. “Officers observed (Courtney) pulling Ryan by one arm through the doorway of the bathroom. Lauren states ‘I know you are faking it. (Courtney) is observed kicking Ryan in the face with her foot, punching his face, and slap his chest. (Courtney) then takes off Ryan’s underwear and drags him into the shower.”

The police report continues on with a detailed description of a sustained beating which lasted at least two minutes.

The boy’s father discovered what occurred at about 11:40 a.m. when he used his cell phone to check his surveillance cameras during a break from work, the Las Vegas Review-Journal reported.  From what he could see, Courtney was attempting to clean up fluids.

He called police around the time Courtney called him to claim Ryan “was apparently not doing good and coughed up blood,” KVBC-TV reported, again citing police records.  The father returned home and learned the full extent of the situation when he reviewed his camera recordings.

The newspaper said the father took Ryan to the hospital.

Courtney told the police that Ryan set her off by peeing his pants.

“(Courtney) stated this is a continual problem and she is tired of having to clean up after him multiple times, week after week,” the police report states. “According to (Courtney), when Ryan urinated himself today, that was the final straw that triggered her anger.”

At one point, Courtney admitted hitting Ryan; at another point, she claimed she blacked because she had mental health issues and could not recall how the boy’s injuries occurred.  She also claimed that the boy hurt himself by slipping in the shower.

Despite being told by investigators what the video showed, Courtney denied most of what she’s alleged to have done.

The attack occurred March 11, KHON-TV reported from Hawaii, where the boy and his father have relatives. Ryan died at the hospital the next day.

A GoFundMe page organized by relatives calls Ryan “a loving, gentle, and adorable little boy who[se] life was taken away from us much too soon.” The site says Ryan “knew every Pokemon” and loved to go fishing with his father. He also would “get so excited whenever he got to feed the little koi fishes at his Papa and Mama’s house.”

“Despite this unfortunate situation, Ryan will always be remembered as a shining light to all who knew him,” the page continues. “His bright smile and contagious energy brightened up any room he entered. He was a wonderful, silly, and joyful little boy, who touched the lives of many with his energetic personality.”

He is survived by his father, his mother, his big sister Carley, and other relatives.