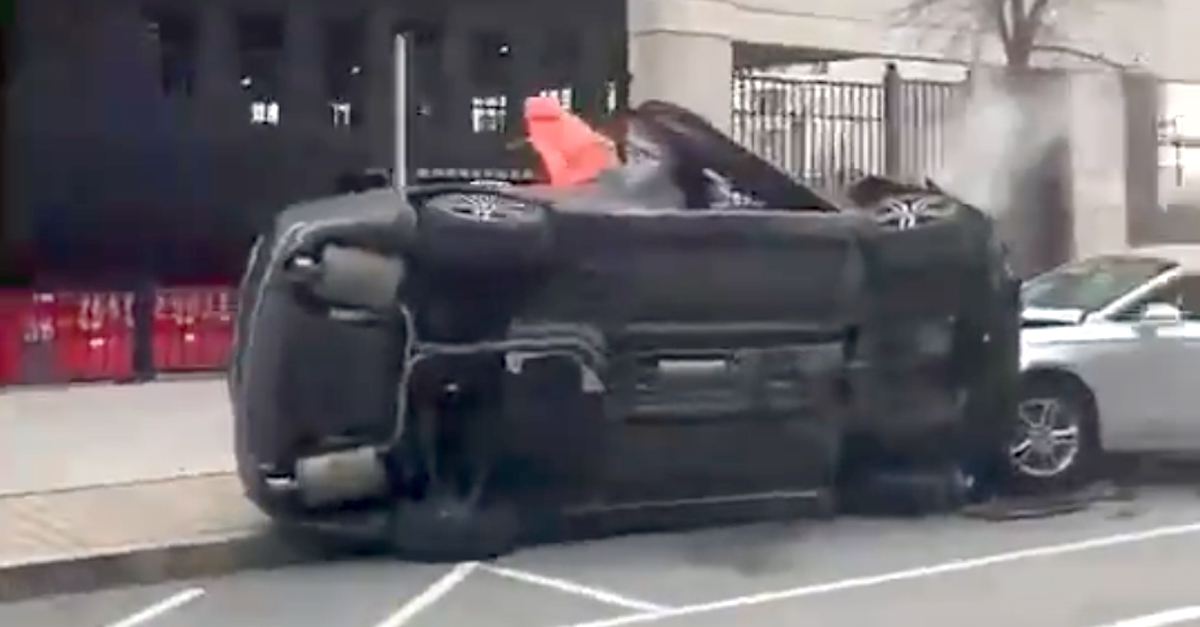 Video posted online Saturday morning appears to show a deadly assault and carjacking which Washington, D.C. authorities are prosecuting as a murder.

WARNING:  THE DETAILS ARE GRAPHIC.

The Metropolitan Police Department says Mohammad Anwar, 66, of Springfield, Va., died after two girls, ages 13 and 15, assaulted him with a taser and drove off with his car on Tuesday afternoon.  The incident occurred in the 1200 block of Van Street, Southeast.

Video which appears to show the incident suggests that the girls took off with Anwar partially in the driver’s seat and partially hanging out of the vehicle.

“What’s going on?” an onlooker asks from off camera shortly after the recording begins.

“Call the cops; they’re trying to steal his car,” someone answers while also off camera.

The engine revs. The car suddenly takes off as an onlooker screams “stop it!”

Anwar is still not fully in the driver’s seat of his gray Honda sedan. The open driver’s door, with Anwar still only partially inside, slams into railings and possibly into a light post as the car careens down the road.

The car disappears out of view less than a block away. Tires squeal. A loud crash is heard. The person recording the camera immediately runs toward the scene.

The vehicle is then seen perpendicular to the road lying on its driver’s side. One of the teens is seen moving toward several man dressed in military gear. The other is seen climbing out of the skyward-pointing passenger door window. Another man helps the second teen get to the ground.

Anwar’s limp and mortally injured body is visible on the sidewalk.

The men dressed in military gear tried to take control of the scene.

The one minute and twenty seven second recording ends.

EXCLUSIVE: Law enforcement sources tell me 2 teenage girls, ages 13 & 15, are accused of an armed car jacking in SE Washington, DC. The car crashed & flipped over near Nats Park. The victim landed on the sidewalk & died at a hospital. Police arrested 2 suspects: @nbcwashington. pic.twitter.com/S5sqKE5gKc

“Mohammad Anwar was a hard-working Pakistani immigrant who came to the United States to create a better life for him and his family,” a GoFundMe page reads.

It calls the incident an “appalling act of violence” and confirms that “Anwar was working on an Uber Eats delivery when two assailants attempted to carjack him in Navy Yard.”

“Anwar was a beloved husband, father, grandfather, uncle, and friend who always provided a smile when you needed one. He leaves behind a family, near and far, who cherish, love, and miss him dearly,” the page continues. “Words can not describe how our family is feeling currently. Devastation, confusion, shock, anger, heartache, and anguish are just a few that come to mind. We will carry him with us always, but it doesn’t take the pain away of losing him so tragically and so unexpectedly soon. Anwar was the financial provider for his family. We would like to provide a traditional Islamic funeral for him and assist his family with the loss of income.”

“We are devastated by this tragic news and our hearts go out to Mohammad’s family during this difficult time,” an Uber spokesperson said, according to CNN and local television station WTOP-TV. “We’re grateful the suspects have been arrested and thank the Metropolitan Police Department for their diligence with this investigation.”

The D.C. Metro Police Department summarized the situation this way:

At approximately 4:31 p.m., members of the First District responded to listed location for the report of a motor vehicle accident. Upon arrival, members located an adult male suffering from life-threatening injuries. DC Fire and Emergency Medical Services responded to the scene and transported the victim to an area hospital for treatment. After all lifesaving efforts failed, the victim was pronounced dead.

Video which appears to show the incident is embedded in the tweet below.

AGAIN, WE WARN YOU:  THE VIDEO IS BOTH VIOLENT AND GRAPHIC.