California Woman Faked Abduction by Hiding Out at Ex-Boyfriend’s Home and Harming Herself in ‘Gone Girl’-esque Plot: FBI 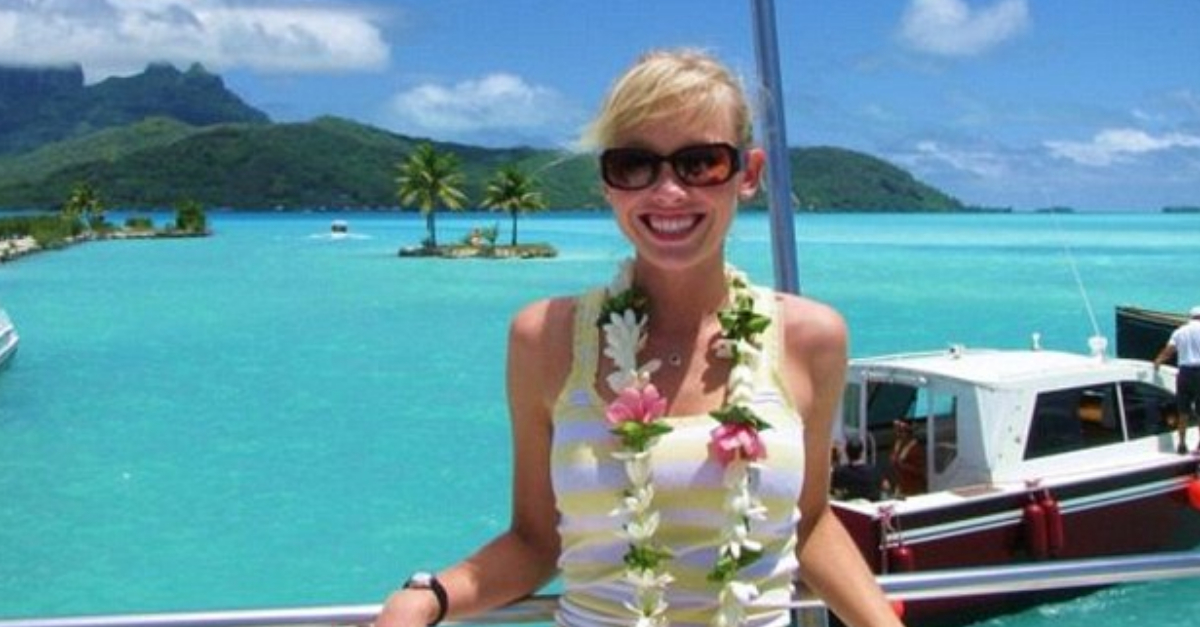 A California woman whose 2016 disappearance became a national news story has been arrested and accused of faking her abduction.

Sherri Papini, 39, was charged on Thursday with making false statements to federal agents and mail fraud, according to a 55-page criminal complaint filed in the Eastern District of California. In a plot twist seemingly straight out of the Gillian Flynn novel “Gone Girl,” Papini had been hiding out with her ex-boyfriend while a nationwide manhunt was underway, according to FBI investigators. The complaint also claims that much like the lead character in Flynn’s book, Papini then harmed herself to make it slower as though she was abducted before returning home to her husband.w

The complaint claims that Papini was not kidnapped while out for a run on Nov. 2, 2016, but rather was picked up by her ex-boyfriend and driven to his home in Southern California some 600 miles away.

Papini is also accused of harming herself so she would appear bruised and beaten when she was found just miles from her home 22 days later, according to the complaint.

She would later claim in interviews with her husband Keith Papini to have been abducted by two Hispanic women, who she claimed beat, starved, branded, and tortured her in a basement where they kept her chained. Papini said she could not provide detailed descriptions of the women because she was forced to cover her eyes with a hood.

The complaint highlights the fact that Papini refused to speak with law enforcement upon her return, and insisted instead on speaking through her husband.

“When a young mother went missing in broad daylight, a community was filled with fear and concern,” U.S. Attorney Phillip Talbert said in a statement after announcing the charges.

“Ultimately, the investigation revealed that there was no kidnapping and that time and resources that could have been used to investigate actual crime, protect the community, and provide resources to victims were wasted.”

Three months after she returned home, Papini finally agreed to speak with the FBI on March 2, 2017.

In that interview, Papini reiterated her claims of being kidnapped at gunpoint by two Hispanic women. She stated that the women held her captive and tortured her before leaving her on the side of the road on Thanksgiving morning, according to the complaint.

Papini repeated those same claims in a second interview with the FBI on Aug. 13, 2020, states the complaint.

That interview was different though, as it occurred after FBI agents had spoken to Papini’s ex-boyfriend and corroborated his claim that the “missing” mom had been with him the whole time.

When an FBI agent presented evidence of this to Papini during that second interview, she suddenly shut down.

Investigators explained that phone records and DNA evidence showed that PAPINI had been in contact with Ex-Boyfriend and again told PAPINI, “[L]ying to [federal agents] is a crime.” Investigators explained that Ex-Boyfriend provided details no one else would know. While Husband was still in the interview room, PAPINI continued to deny that she ran away with Ex-Boyfriend. Once Husband left the room, PAPINI admitted that she and Ex-Boyfriend, “did talk a little bit before” and said, “When I went out of town for work. I talked with other guys ……… I made a mistake and I talked to other men and I shouldn’t have.” When investigators asked PAPINI how she was talking to Ex-Boyfriend, she responded, “My work cell phone.” PAPINI continued to say she made a mistake “for talking to other guys” and said, “I am horrible.” Ultimately, PAPINI continued to state, “It can’t be [Ex-Boyfriend],” and did not provide any further information to investigators about her time with Ex-Boyfriend in Southern California. Investigators asked, “You were pretty clear earlier when I asked what did the younger one do, you said the younger one pointed a gun at you,” and PAPINI responded falsely, “She was there [and] she let me go.” Investigators stated, “Did a woman point a gun at you and put you in the car? Yes or no?” and PAPINI responded, “I don’t remember.” Investigators continued to ask PAPINI what happened with Ex-Boyfriend, and PAPINI stated, “You know who she is, I know you do. I know you know who she is. I am not saying it, I don’t want her to get in trouble. I know you know who she is.” PAPINI did not at any point throughout the interview disavow her repeated statements that two Hispanic women kidnapped her, nor did she ever admit that Ex-Boyfriend had picked her up and that she had resided at Ex-Boyfriend’s home during the period she was reported missing.

Papini is now charged with making false statements to federal agents for the claims she made in those two interviews. 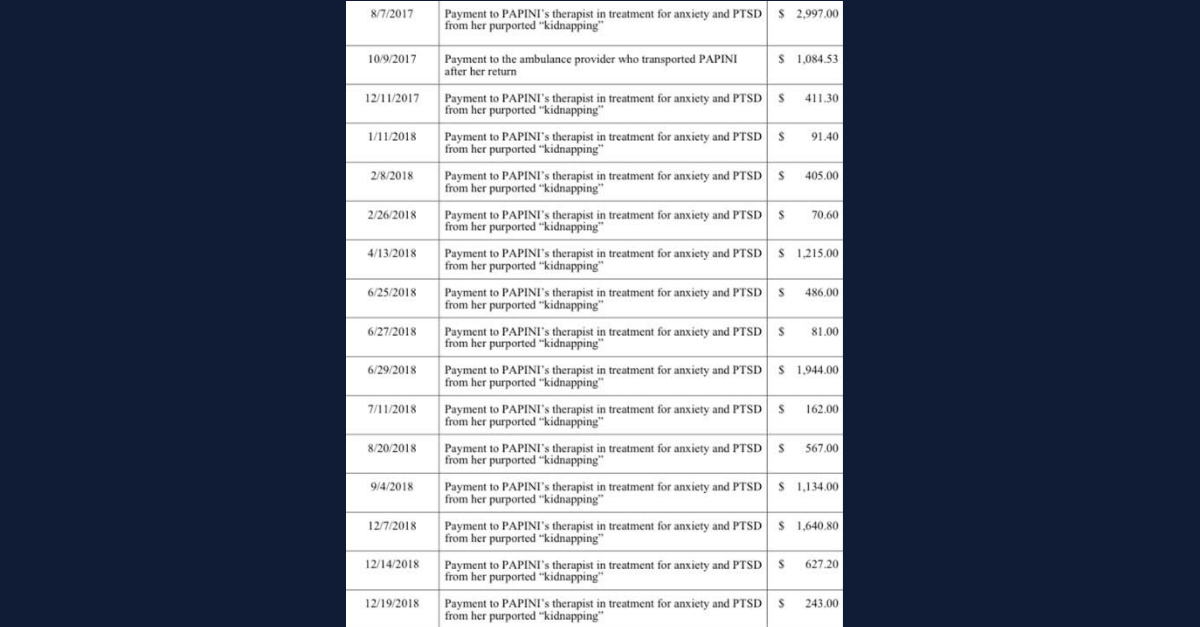 A look at some of the bills Papini had reimbursed (via federal court filing).

Meanwhile, the mail fraud charge comes from the $30,000 that Papini allegedly received from the California Victim’s Compensation Board after she went missing, according to the complaint.

Papini received reimbursements for therapy sessions, medical appointments, and even blinds for her home from the fund, the complaint states. Some of these reimbursements were sent via mail.

The complaint also noted that the close to $50,000 raised for Papini through GoFundMe went to pay off her credit card bills.

A spokesperson for the Papini family responded to these charges in a statement on Thursday.

“We are confused by several aspects of the charges and hope to get clarification in the coming days,” read the statement.

“We love Sherri and are appalled by the way in which law enforcement ambushed her this afternoon in a dramatic and unnecessary manner in front of her children. If requested, Sherri would have fully complied and come to the police station, as she has done multiple times before, where this could have been handled in a more appropriate way.”

The statement, which did not deny any of the charges outlined in the complaint, also accused law enforcement of trying to drive a wedge between Papini and her husband.

“Sherri and Keith have cooperated with law enforcement’s requests despite repeated attempts to unnecessarily pit them against each other, empty threats to publicly embarrass them, and other conduct that was less than professional,” wrote family spokesperson Chris Thomas.

Keith Papini has remained by his wife’s side through it all, even lashing out at Papini’s detractors in a statement to the media after his wife returned home.

“Rumors, assumptions, lies, and hate have been both exhausting and disgusting. Those people should be ashamed of their malicious, sub human behavior,” said Keith. “We are not going to allow those people to take away our spirit, love, or rejoice in our girl found alive and home where she belongs.”

He later stated: “I do not see a purpose in addressing each preposterous lie. Instead, may I give you a glimpse of the mixture of horror and elation that was my experience of reuniting with the love of my life and mother of our children.”

A spokesperson for the U.S. Attorney’s Office would not say if Keith was aware of his wife’s plot and would only note that he is not being charged with any crime.

Papini does not yet have a lawyer.

These charges were also a long time coming for local authorities, who struggled to make sense of Papini’s claims from the start.

“Right now, we have no known reason why she was abducted, we do not know if she was specifically targeted or if this was a random abduction,” noted Shasta County Sheriff Tom Bosenko in 2016, after Papini reunited with her husband and children.

“Abductions are generally rare, especially in this area, but I mean in general an adult abduction is an unusual occurrence.”

Sheriff Bosenko’s replacement commented on this new development in the case of Thursday.

“Today is a great day for the Shasta County Sheriff’s Office, and for all law enforcement in this county. Sherri Papini cost public safety (conservatively) in excess of $150,000 dollars in resources to investigate her knowingly false claims and staged abduction,” said Sheriff Michael Johnson.

“Not only did this charade take valuable resources away from real criminal investigative matters, but in a time where there is serious human trafficking cases with legitimate victims Sherri Papini used this tragic societal phenomenon to gain notoriety and financial gain.”

He closed by saying: “Finally, all of law enforcement in Shasta county was put on a national stage and subjected to scrutiny and criticism for the handling this case. It has been a long time coming and we are grateful that our federal partners for diligently pursuing justice.”