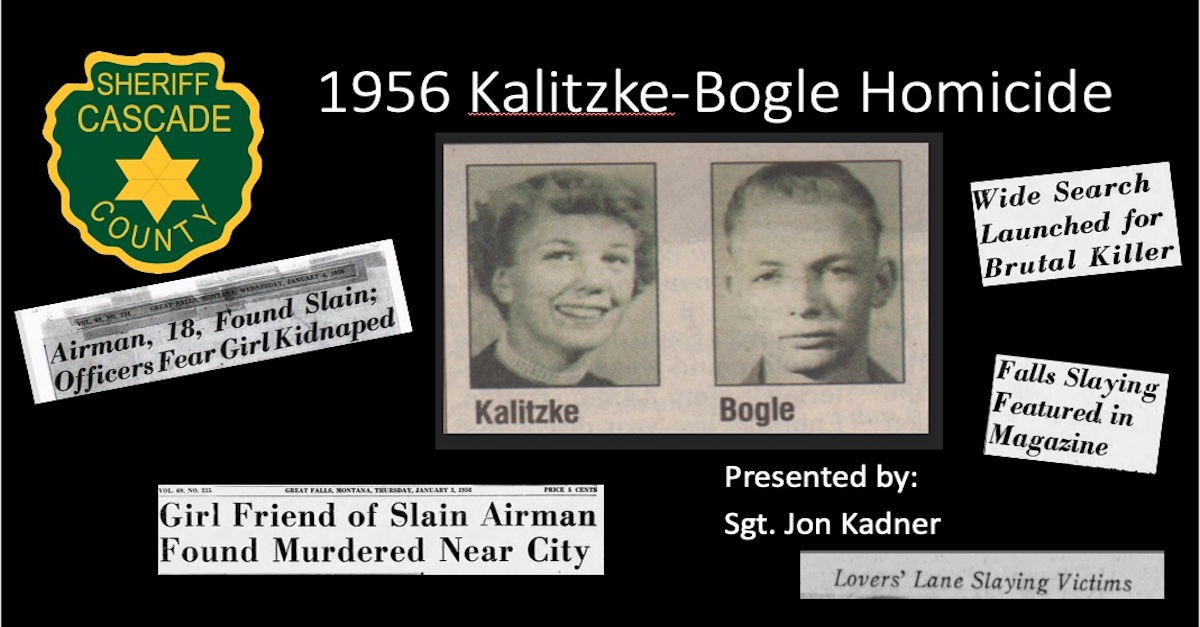 The Cascade County Sheriff’s Office in Montana has finally closed out a 1956 double homicide of two teenagers, in what the lead investigator believes is the oldest murder case to be solved using forensic genealogy nationwide.

Sixty-five years ago, the bodies of 18-year-old Lloyd Duane Bogle and his girlfriend, 16-year-old Patricia Kalitzke, were found near Bogle’s car, both dead from gunshot wounds to the head. According to a report in the Great Falls Tribune, leads at the time dried up, and although around 35 suspects were considered—including gangster James Joseph “Whitey” Bulger, Jr.—all were eventually ruled out as the killer. The case sat unresolved for decades.

But according to the report, a few breaks over the years have finally led investigators to believe that Kenneth Gould, a former Great Falls resident who died in 2007, likely killed the teenagers.

First, in 1988, detective Phil Matteson started working in the Cascade County Sheriff’s Office evidence room, which still contained the Kalitzke-Bogle homicide evidence, according to the Tribune. In 2001, Matteson had a microscopic slide of a vaginal swab taken from Kalitzke’s body sent for analysis in what was then standard for autopsies, and that lab found a sperm cell that did not belong to Bogle, the paper reported.

Then, in 2018, the case of the Golden State Killer was solved using forensic genealogy, or the process of matching suspects’ DNA to data uploaded on commercial ancestry websites in order to find possible relatives to the suspect. The next year, Cascade County detectives worked with a lab to perform additional testing on the DNA evidence found on Kalitzke’s body in 2001, and found a possible family connection after uploading the sample to genealogical websites, according to the Tribune report.

Lead investigator Sgt. Jon Kadner told Law&Crime that when forensic genealogy firm Bode Technology confirmed DNA connections to the sample he had sent, it was a turning point in cracking the case.

“When they basically built the family tree back from those known test takers that have a familial relationship to that known suspect, I was pretty confident that we were going to get to the bottom of it and get it solved,” Kadner said, adding that Gould “wasn’t on anybody’s radar” in connection with the case, and that he hasn’t found any mention of Gould in the case documents.

Kadner said that although neither Kalitzke nor Bogle had many living relatives, solving the case still helped answer a lifetime’s worth of questions.

“I talked to the wife of Duane [Bogle’s] brother, and he was a very successful man, but she said that he still struggled with it for most of his life, not having that closure and those answers,” Kadner told Law&Crime.

Gould was cremated after his death, so investigators asked Gould’s surviving children for samples to verify the match. Kadner said working with them on the case was relatively straightforward.

“She was pretty matter of fact about it,” Kadner said of one of Gould’s children whose DNA was identified as a familial connection. “She really couldn’t dispute that her DNA matched the suspect’s sample. Basically what she had said was: ‘Sometimes you just don’t know everybody’s secrets.'”

Kadner said it was the oldest case he could find in the country to be solved with forensic genealogy.

According to the Tribune, Gould would have been 29 years old when he killed Kalitzke and Bogle. After the murders, his family eventually moved to 1967 and did not return to Montana. Gould did not have a criminal history and was not considered a suspect during the initial investigation, the Tribune report said.