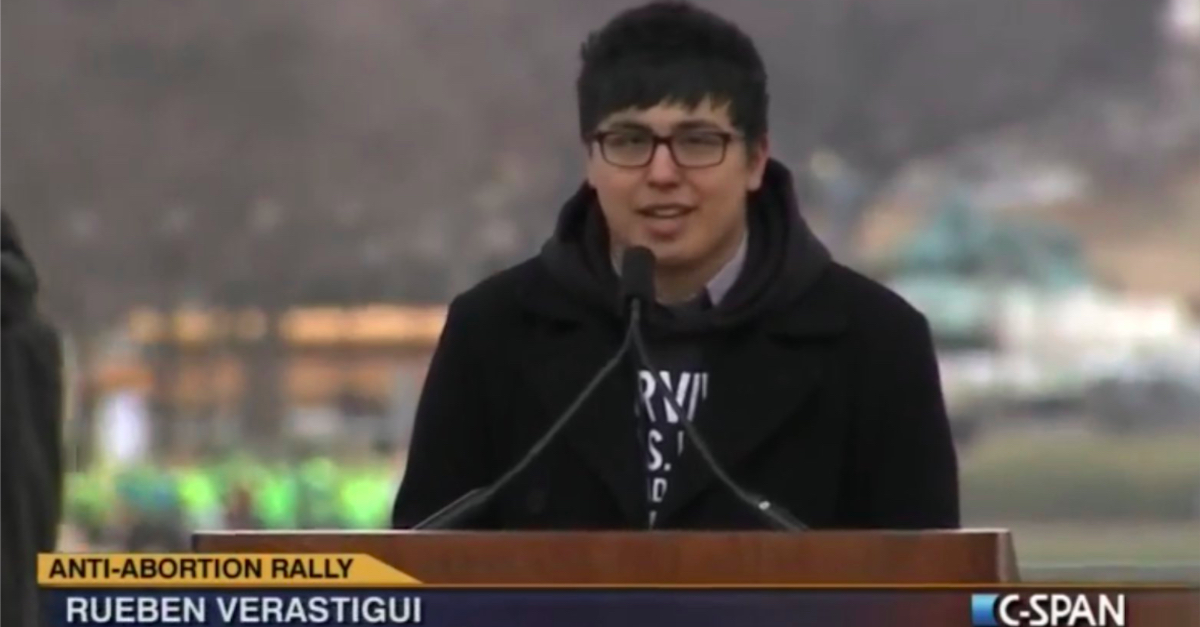 Ruben Verastigui appears in a C-SPAN screengrab. (His name is misspelled in the graphic under the video but is spelled as given in federal court documents in this report.)

Warning: The details of the story below are graphic and disturbing.

An ex-GOP staffer who helped design social media ads for Donald Trump’s re-election campaign has been sentenced to more than 12 years in prison for receiving hundreds of child sexual abuse materials, including videos of babies being raped.

Ruben Verastigui, 29, reportedly posted a photograph of himself at the White House just two months before his arrest on child pornography offenses. According to his now-deleted LinkedIn account, Verastigui previously worked as a senior digital strategist for the Senate Republican Conference and the Republican National Committee. Verastigui also acted as the digital media coordinator for the anti-abortion group Students for Life of America. He left the Republican Conference in July of 2020 to become the communications manager for the nonprofit group Citizens For Responsible Energy Solutions, his profile said.

When Verastigui spoke at the National March for Life in 2013, he said: “I truly believe that we are the chosen generation, and we will abolish abortion and change history.”

Several years later, Verastigui discussed “in great detail how much he enjoyed seeing children getting raped and killed,” prosecutors said.

After Homeland Security took over the case, federal agents said they found Verastigui engaging in disturbing chats with a group of 17 people, where several members boasted about “actively producing” child sexual abuse materials and sharing them with other members. Verastigui had the user name “Landon” and the handle @somethingtaken.

On April 13, 2020, Verastigui told a member of the group that videos of babies were his “absolute favorite.”

A six-page affidavit which detailed the Homeland Security investigation quotes Verstigui in the following conversation with another group member:

Verastigui: Well like I said babies are some of my biggest turn-ons and beast

Verastigui: Fuck I love all that

Verastigui: I have been wanting to see videos of guys hardcore rapping [sic] a baby..when a baby screams it’s my favorite

Verastigui: I’ve lost a lot of videos so only have one I’ve been jerking off to.

Verastigui: The ginger guy fucked the baby…have any good ones?

After the source sent Verastigui a video of a red-headed adult male sexually penetrating a toddler, Verastigui responded “FUCK YES,” according to the affidavit.

“The other group member then sent numerous other child pornography videos to Verastigui, including depictions of adults performing oral sex on babies,” Verastigui’s statement of offense reads. “Verastigui commented on these videos, saying he ‘wished they were longer.'”

Authorities say that they found 162 videos and over 50 images of child pornography on Verastigui’s phone during a forensic examination. Verastigui pleaded guilty in July 2021.

U.S. District Judge Amit Mehta, a Barack Obama appointee, dealt Verastigui a sentence of 151 months in prison on Thursday. After that roughly 12.5-year term, Verastigui will serve at least five years of supervised release, and he will be forced to register as a sex offender for at least 15 years after that. Showing the case’s unusual secrecy, Verastigui’s sentencing briefings were not filed publicly.

Verastigui was sentenced on the same day the Senate confirmed Ketanji Brown Jackson as Supreme Court justice, whom Republicans tried to discredit by misleadingly depicting her as lenient on child pornography offenses.  As established in numerous fact-checks, Jackson’s sentences in child pornography cases were on par with those dealt with 80 percent of her peers in the District of D.C.