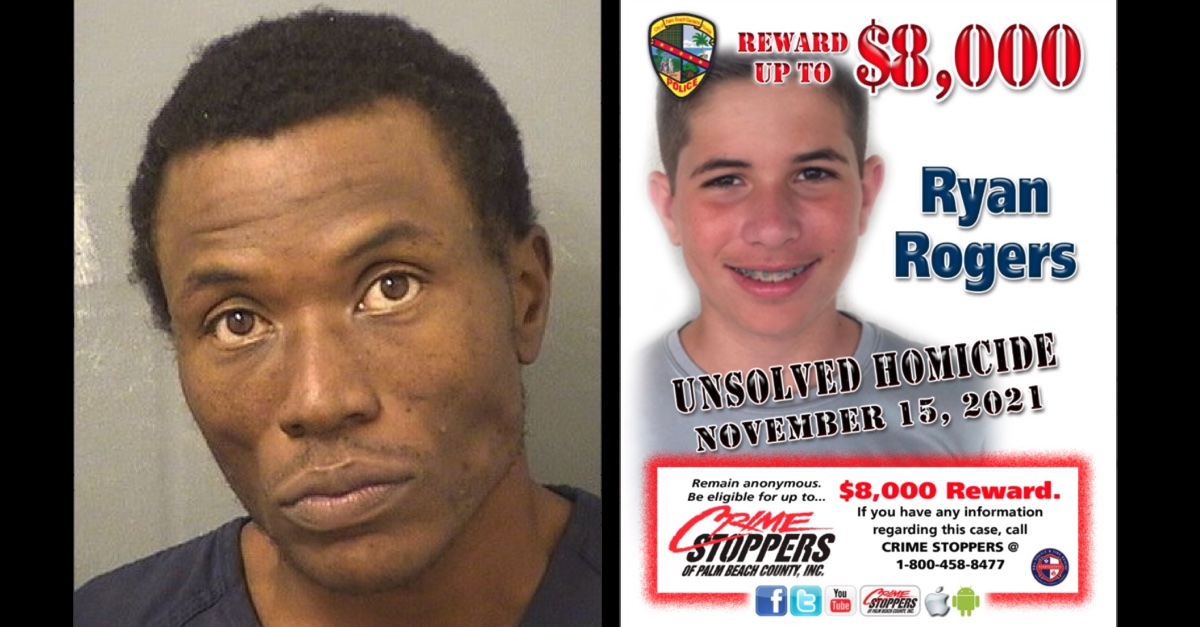 Two psychologists found a man competent to stand trial in an apparently random deadly attack on a 14-year-old boy.

The psychologists’ report, however, is not available online.

Williams’s defense has said the defendant lives with schizophrenia. He has reportedly undergone psychiatric treatment in the past while facing an unrelated criminal case.

Police in Palm Beach Gardens, Florida, say he is the man who stabbed Ryan Rogers, 14, to death while the boy was out on a bike ride. The teenager was last seen leaving home on Nov. 15, 2021. He was found dead the next day about 80 feet from an overpass of Interstate 95, in a wooded area out of sight from a nearby sidewalk of Central Boulevard, police said in a probable cause affidavit.

According to authorities, there’s surveillance footage of an individual—believed to be Williams—going northbound on Central Boulevard while Rogers was going southbound.

“The subject was walking toward the victim,” police said. “The two would have crossed paths at approximately 7:31 pm.”

The suspect allegedly denied encountering Ryan, but police said they found a bloodstained bandana in his backpack. DNA matched to both him and Rogers, officers said.

There’s no indication that they knew each other, cops have said.

“The incident itself appears to be a completely random act,” Palm Beach Gardens Chief of Police Clinton Shannon said at the time. “We do not have a motive in this case and I would best describe it as an innocent child victim having a chance encounter with a very violent criminal.”

Williams’s attorney has voiced concern about his client’s ability to participate in this first-degree murder case, saying the man has a long history of schizophrenia and treatment.

“Because of his severe mental illness, he appears unable to testify relevantly, to disclose to counsel facts pertinent to the proceedings at issue, or to otherwise meaningfully participate in and aid counsel in defending a case in which the state is seeking the death penalty,” public defender Scott T. Pribble said in a motion for a competency evaluation dated Feb. 8.

Before and amid the murder, Williams posted now-deleted videos to YouTube in which he claimed there was a conspiracy against him, according to the Palm Beach Post. He alleged that he faced mistreatment including sexual assault, stalking, and police putting implants on his body so they could see through his eyes.

“Somebody attacked me last night,” he reportedly said the day after the murder. “They had people ride past me on bikes, and I’ve been getting physically assaulted.”

Williams previously spent two years in a psychiatric hospital for incompetency when charged for attacking an elderly man near Atlanta, Georgia, according to the Post. As in the murder case, authorities said he the crime was unprovoked. He pleaded guilty to felony aggravated assault as a person over 65 and did not get jail time, but the judge ordered him to undergo a residential program for people with “severe and persistent mental illnesses.” Williams left there in 2020.

Williams remains at the Palm Beach County Jail without bond.