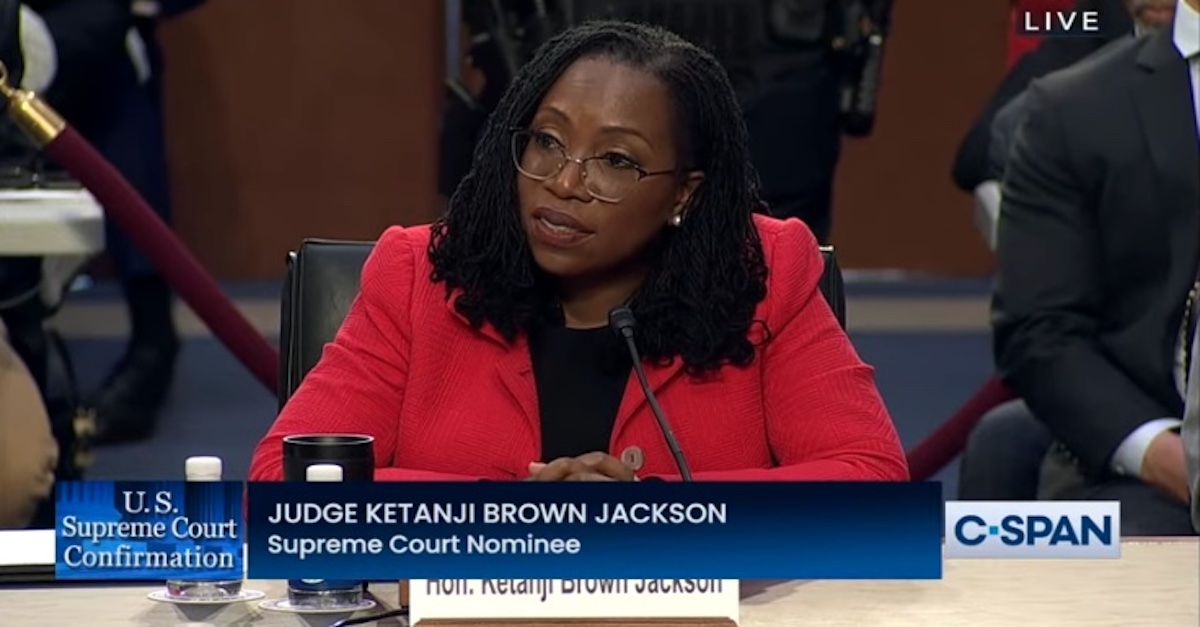 Facing fire from Republican critics intent on labeling her a “judicial activist,” Supreme Court nominee Ketanji Brown Jackson outlined a methodical, three-step approach to considering cases during her the second day of her confirmation hearings. Now sitting on the D.C. Circuit, Judge Jackson described her judicial philosophy, how she would determine the existence of a “fundamental right,” and sentences she issued in cases related to depictions of child sexual abuse.

Jackson, who would be the first Black woman to serve as a justice on the nation’s highest court, fielded some decidedly unfriendly fire from some Republicans who continue to push the widely discredited QAnon-adjacent theory that she is somehow lenient with defendants convicted of possessing child pornography.

The Senate Judiciary Committee, currently chaired by Dick Durbin (D-Ill.), was quick to note that Jackson’s sentences were in line with her peers, noting that other District of D.C. imposed below-guidelines sentences in these cases 80 percent of the time.

“Adherence to the Text Is a Restraint on My Authority”

Republican senators on the judiciary committee repeatedly raised what they said were concerns about Jackson’s “judicial philosophy.”

“I want to know more about your judicial philosophy,” Sen. Lindsey Graham (R-S.C.) said during opening remarks on Monday, adding that he was concerned that “people on the left” believe that Jackson is “the best bet” to reach the Supreme Court.

Sen. Marsha Blackburn (R-Tenn.) said Monday that “the American people deserve a Supreme Court justice with a documented commitment to the rule of law,” and expressed concern that Jackson might be a “judicial activist” with a “hidden agenda.”

When Committee Chair Durbin invited Jackson to speak Tuesday morning as the hearing got underway, the first thing Jackson did was to describe her three-step methodology to approaching cases.

“When I get a case I assure I am proceeding from a position of neutrality,” Jackson said, describing the first step of her methodology. “I am clearing my mind of any preconceived notions about how the case might come out, setting aside my personal views.”

“Once I’ve cleared the decks, so to speak, in this way, I’m able to receive all the appropriate input for the case,” Jackson said, such as the parties’ arguments and amici briefs. She added that this is also the point where she starts evaluating the facts from various perspectives.

“Experiences I’ve had help me to see the perspective of the parties and their arguments,” Jackson said.

Her third step is interpretation and application of the law to the facts in the case.

“This is where I’m really observing the constraints on my judicial authority,” she said, citing threshold issues such as whether she even has jurisdiction over the case. She also looks to the text of the statute or constitution, depending on what the case requires.

“Adherence to the text is a restraint on my authority,” Jackson said. “I’m looking at what those words mean as intended by the people who wrote them.”

Jackson said that she also looks to precedents set by prior Supreme Court cases and the “binding principle” of stare decisis, the practice of determining points of litigation according to precedent.

“That Is the Nature of a Right.”

Sen. Chuck Grassley (R-Iowa) was the first to raise the issue of “fundamental rights“—those rights that the Supreme Court has determined deserve a high degree of Constitutional protection—and how to determine what rights are fundamental if they are not named in the Constitution.

“How would you go about deciding what a fundamental right is under the Constitution?” Grassley asked Jackson.

Jackson said she wouldn’t feel comfortable answering that question “in the abstract,” but noted that Supreme Court jurisprudence has set precedents for determining whether something is fundamental.

Texas Sen. John Cornyn also raised the issue, citing the landmark 2015 decision in Obergefell v. Hodges that guaranteed marriage as a fundamental right that applies to people in same-sex couples as well as opposite-sex couples, and concluded that state laws banning same-sex marriage are unconstitutional.

“Do you see that when the Supreme Court makes a dramatic pronouncement about the invalidity of state marriage laws, it will inevitably set a conflict between those who ascribe to the Supreme Court’s edict and those who have a firmly held religious belief that marriage is between a man and woman?” Cornyn asked, apparently arguing that the existence of a fundamental right to marry wrongly infringed on a state’s right to prohibit marriage between same-sex couples.

Jackson demurred, saying that since such cases are currently being litigated, she was limited in what she could say. She did, however, address Cornyn’s stated concern that when a Supreme Court panel “decides something not in the Constitution is a fundamental right,” it creates a “conflict with what people believe and what the federal government says is the law of the land.”

“That is the nature of a right,” Jackson responded. “When there is a right, it means that there are limitations on regulation, even if people are regulating pursuant to their sincerely-held religious beliefs.”

Jackson explained to Cornyn that the Supreme Court has interpreted the Constitution to include rights that might not be specifically identified in the text, and has set a framework for determining what qualifies as a fundamental right.

“The Supreme Court has said that the kinds of things that qualify are implicit in the concept of ordered liberty or deeply-rooted in our nation’s history or tradition,” Jackson said. “Those are standards that define a narrow set of activities.”

“Is It Your View That Society is Too Hard on Sex Offenders?”

As anticipated, Sen. Josh Hawley (R-Mo.) jumped right into the issue that he has made his calling card since Jackson’s nomination was announced: sentencing decisions she made in cases involving people convicted of child pornography.

“I appreciate … that you’re questioning whether I take [child pornography cases] seriously, or if I have some reason to handle them in either a different way than my peers or different way than other cases, and I assure you that I do not,” Jackson said to Hawley, who has previously hinted that Jackson is too lenient on sex offenders.

On Tuesday, he stopped hinting and stated clearly what appears to have been on his mind all along.

“Is it your view that society is too hard on sex offenders?” Hawley asked, referring to a legal note that Jackson contributed to the law review when she was a student at Harvard Law School.

Jackson explained that the legal analysis to which Hawley was referring was limited to evaluating a new law, and not a commentary on whether the law should be implemented.

“As a law school student, I was evaluating a new set of legislation, state laws about [sex offender] registration,” Jackson said. “I was analyzing them as law students do. It wasn’t about the sex crimes, it was about the characterization of the law: Was it a punitive law? Was it a proscriptive law? How would the court go about determining that? It was about the characterization of legislation.”

Jackson noted that while Congress initially intended for laws to impose mandatory sentences in child pornography cases, the Supreme Court, in an opinion written by the late Antonin Scalia, ruled that judges must have discretion.

“We have judges who are doing their level best to make sure that people are held accountable as they need to be in our society in a fair and just way,” Jackson told Hawley.