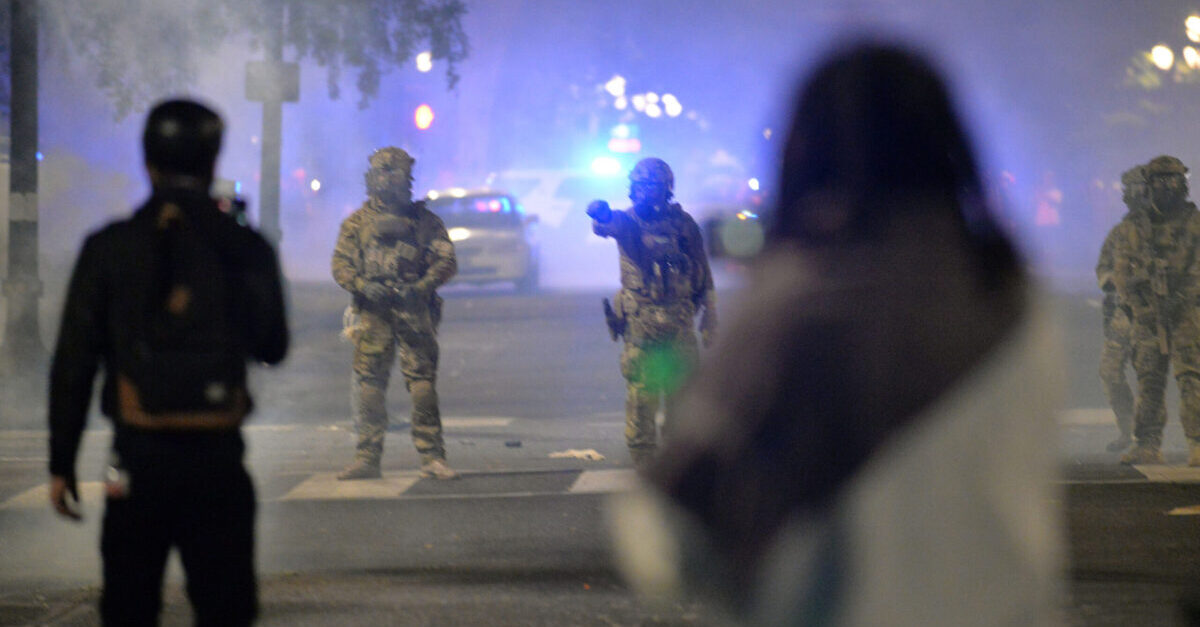 Protesters and police square off on a street in downtown Portland, Oregon, on July 23, 2020. Police fired teargas and fought running battles with protesters.

Portland police officers who were members of a specialized crowd-control team have stepped down from their positions after one officer on the team was indicted for an alleged assault during an August 2020 protest.

Video shows that on August 18, 2020, Portland police officer Corey Budworth struck the back of a woman’s head with his baton as she was running away from him. The woman fell, at which point Budworth struck her again on her head, according to the video.

But that wasn’t the end for Budworth, who on Tuesday was indicted on a misdemeanor charge of fourth degree assault for “unlawfully and intentionally, knowingly and recklessly caus[ing] physical injury.” If convicted, Budworth could face up to a year in prison and a $6,250 fine.

Budworth’s colleagues on the crowd-control team resigned the next day.

“On June 16, 2021, Portland Police Bureau employees serving as members of the Rapid Response Team (RRT) left their voluntary positions and no longer comprise a team,” the Portland police said in a statement Thursday, adding that there were around 50 people on the team.

“The Rapid Response Team is an all-hazard incident response team that has received advanced specialized training to respond to incidents requiring higher levels of technical expertise including public order policing, natural or man-made disasters,” the statement said. “The primary role has been to provide public safety at crowd events where there was a threat of harm to the community. All Rapid Response Team members are trained in advanced skills related to crowd management and crowd control including crowd psychology and behavior, team formations and movements, the use of enhanced personal protective equipment, use of force, de-escalation, and arrests.”

The mass resignation is reminiscent of the actions of police in Buffalo, New York, where officers on the city’s Emergency Response Team were seen shoving 75-year-old Martin Gugino to the ground last June. The two officers involved in the incident were suspended without pay, and nearly 60 of the officers’ colleagues resigned that same day from the ERT in protest of the suspensions.

The Portland Police Association, the union that represents the city’s officers, called Budworth’s indictment a “politically driven charging decision,” saying that “this decorated public servant has been caught in the crossfire of agenda-driven city leaders and a politicized criminal justice system.”

Mike Schmidt, the Multnomah County District Attorney, said in a statement Thursday that he trusts the Portland Police Bureau to do its job despite the mass resignation.

“Management and staffing of the Rapid Response Team falls within the purview of the leadership of the Portland Police Bureau,” Schmidt said. “I have confidence that the Bureau will continue their mission to maintain public safety. In the meantime, my office will continue to focus on the fair and just prosecution of criminal matters.”

“We cannot expect the community to trust law enforcement if we hold ourselves to a lower standard,” Schmidt added.

According to The Oregonian, this is the first time that that a Portland police officer has faced prosecution for striking or firing at someone during a protest, and only the second time a police officer has been indicted for such physical use of force on duty. Schmidt told Oregon Public Broadcasting that his office is reviewing multiple use-of-force incidents stemming from the 2020 protests.

Budworth’s arraignment is set for July 12.