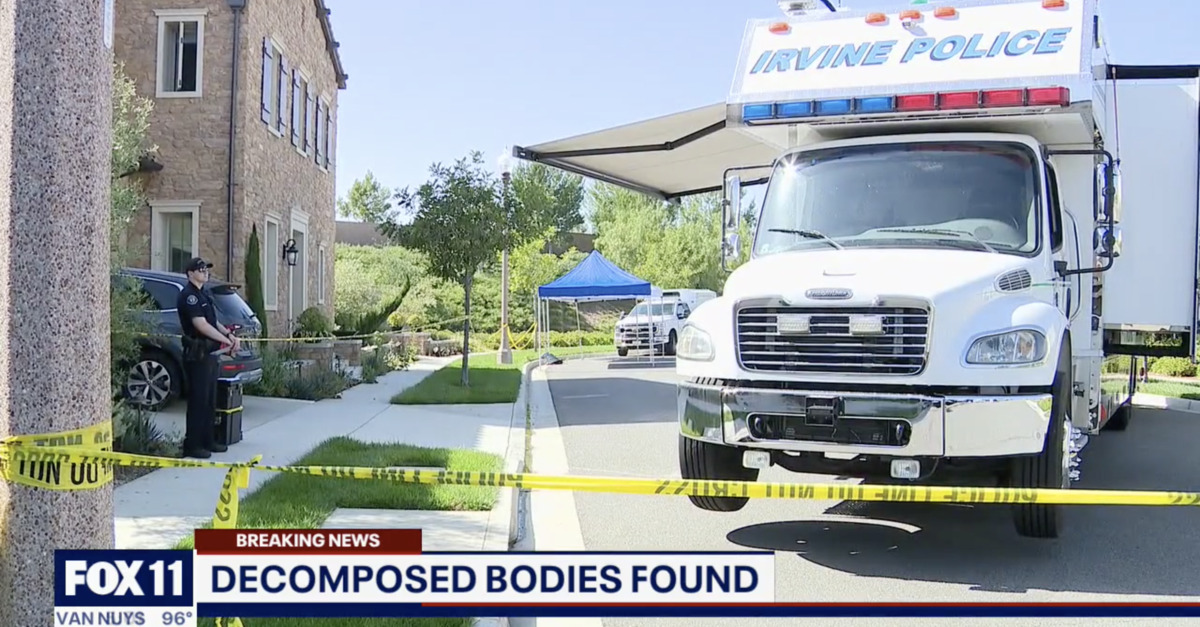 Authorities in Southern California suspect a double murder-suicide may have occurred sometime last year after the bodies of three individuals in an advanced state of decomposition were discovered inside of a home in a posh, gated community earlier this week.

“Responding officers entered the home and discovered three severely decomposed bodies inside that appeared to be adults,” the Irvine Police Department said in a Wednesday press release obtained by Law&Crime. According to real estate website Zillow, the home in question is currently valued at over $2.4 million.

The high-priced nature of the community was reportedly cited by neighbors as one possible reason for why the bodies were allowed to sit undisturbed and decay for so long without anyone saying anything about the disappearance, according to Los Angeles-based CW affiliate KTLA. Nearby residents said many people in the area own homes as vacation or investment properties and, therefore, an extended lack of activity at any given house isn’t particularly unusual — even if it makes the properties appear otherwise vacant.

Adding to the apparent lack of alarm over the family’s whereabouts in the neighborhood was that the home in question also received regular gardening and lawn maintenance by way of a homeowner’s association, neighbors also told KTLA.

“As I understand it, there’s a homeowners’ association that’s responsible for at least some of the lawn care and maintenance for the front of the homes,” IPD Lieutenant Bill Bingham added in comments to West Coast flagship ABC station KABC. “Looking at the home at a glance it’s not immediately apparent that somebody hasn’t been in and out of the home for maybe up to a year.”

The TV station also reported that police believe the bodies may have been lying undisturbed for some 18 months. The identities of the deceased have not been released as of this writing.

According to The Orange County Register, the deceased appeared to be a mother in her 50s, a father in his 60s and a son in his 30s. Additionally, the Register cited a somewhat different timeline–suggesting that police believe the bodies may have only been there for 16 months.

The welfare check resulting in the grim discovery was requested by Canadian authorities, the IPD said, after far northern relatives of the family who lived at the Irvine house hadn’t heard from them in over a year and expressed concerns about the wellbeing of the Californians.

The extended family members live in the Canadian province of Quebec and contacted the Royal Canadian Mounted Police–who eventually contacted California authorities, according to Los Angeles FOX affiliate KTTV. The outlet reported that at least one window was ripped open in order to accommodate the “smell” of the long-decomposing bodies inside the “upscale” home.

According to the press release, police believe the bodies belong to a father, mother, and their adult son. Authorities have allegedly found evidence that suggests the deaths resulted from a murder-suicide situation brought on by a “domestic-related incident.”

“There were no signs of forced entry into the home and IPD is not searching for outstanding suspects,” police said.

While details are currently scarce, West Coast flagship NBC station KNBC reported that police discovered some kind of a “handgun” inside of the home on Riverboat Street. The Register reports that the handgun was discovered “near” one of the deceased believed-to-be family members.

In an email, Bingham told Law&Crime the press release was “related to a potential murder-suicide under investigation.”