Parents and Grandparent Locked Three Children in Attic for Several Years; Used Belts, Bats, Mallets and a Cat to ‘Torture’ and Starve Them: Police 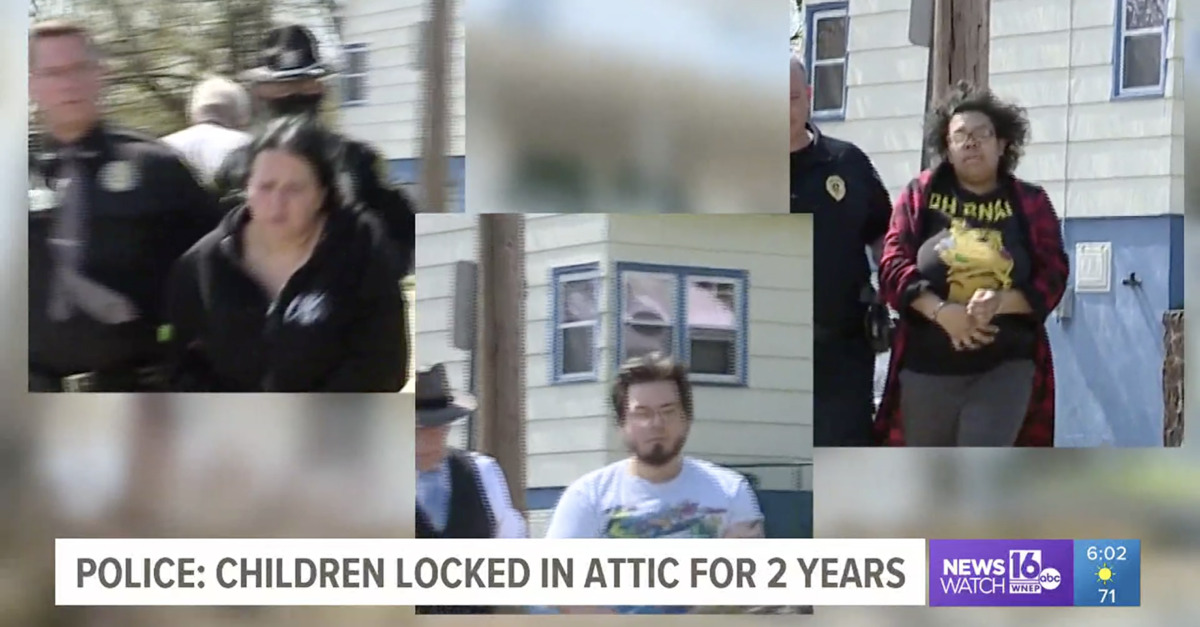 Police have filed a shocking array of child abuse-related charges against three adults in the Eastern Pennsylvania coal region.

Authorities say the children involved were imprisoned in the attic of an unassuming mid-sized home adjacent to a large local skate park. There, they were regularly beaten and kept all-but powerless through a strict regime of starvation, violence and fear. Neighbors were clueless.

Locked up and alone, two boys, aged 11 and 12, and one nine-year-old girl were “tortured” by their parents and a step-grandparent for several years, according to the Minersville Police Department.

Until, in early March, the oldest boy escaped.

According to local ABC affiliate WNEP, a woman spotted the escapee. She noticed his bruises and a look of desperation.

A quick 911 call later and the children were removed from the home.

“Fortunately, one of our residents saw this young man out pacing around back-and-forth, and although she’s used to seeing children running around the streets, this child looked like he was in distress and she just asked him, ‘Hey, buddy. Do you need some help,'” Minersville Police Chief Michael Combs told Allenton, Pa. TV station WFMZ.

The children appear to have been beaten with hands and implements. The adults allegedly used belts, bats and mallets, poked them with forks, pushed the children down the stairs and would even go so far as to agitate a house cat and then place it on one of the children’s stomachs in order to scratch and wound him.

On Thursday, Jennifer Yost, 27, her fiancé Todd Matthew Richter II, 32, and her mother, Wendy Yost, 51, were arraigned in Schuylkill County on six-to-eight charges apiece including aggravated assault, simple assault, recklessly endangering another person, unlawful restraint, false imprisonment, endangering the welfare of children, and harassment. Each of the women was also charged with strangulation. The elder Yost was not charged with unlawful restraint.

Jennifer Yost faces a total of 37 separate counts according to court records viewed by Law&Crime. Richter faces 25 counts. Wendy Yost faces 21 counts. All three defendants are due for additional court proceedings on the morning of April 13 at the Schuylkill County Courthouse.

Magisterial District Judge David A. Plachko called the allegations against the trio “the most serious, disturbing and heart-wrenching” that he had seen in three decades.

[Minersville Police Patrolman Richard] Clink said the children looked pale, emaciated and appeared to be fearful. The 11-year-old boy had a semi-healed cut on his left wrist and a cut on his lip.

Based on comments made by the elder boy about an attic area of the home, Clink said a search was conducted and a strong odor of urine was evident, with a peanut butter jar that appeared to be filled with urine and a 5-gallon bucket that appeared to be liquid feces.

All of the items were in an area where the boy said that he and his siblings were held captive, Clink said.

“It was a sad case, but we’re happy that those children are out of that situation,” Combs said. “They told us how to get water to drink, they were being locked in the attic, and they would open the window, and there’s a drain there, and they had an old peanut butter jar or something, and they would stick the underneath the drain in order to get something to drink.”

The children also told investigators that they were forced to eat food scraps often covered in mold, and even then, only allowed such sustenance “once every couple days.” Hygiene was also essentially nonexistent; the oldest boy said he hardly ever got to brush his teeth.

“No,” the police chief added when asked about his experience with similar cases. “I’ve never seen anything like this in Minersville. We’ve had certainly cases of child abuse, child sexual exploitation and things like that, but that these children endured this many years of this kind of treatment is beyond anything that I’ve seen.”

Read the court dockets below: