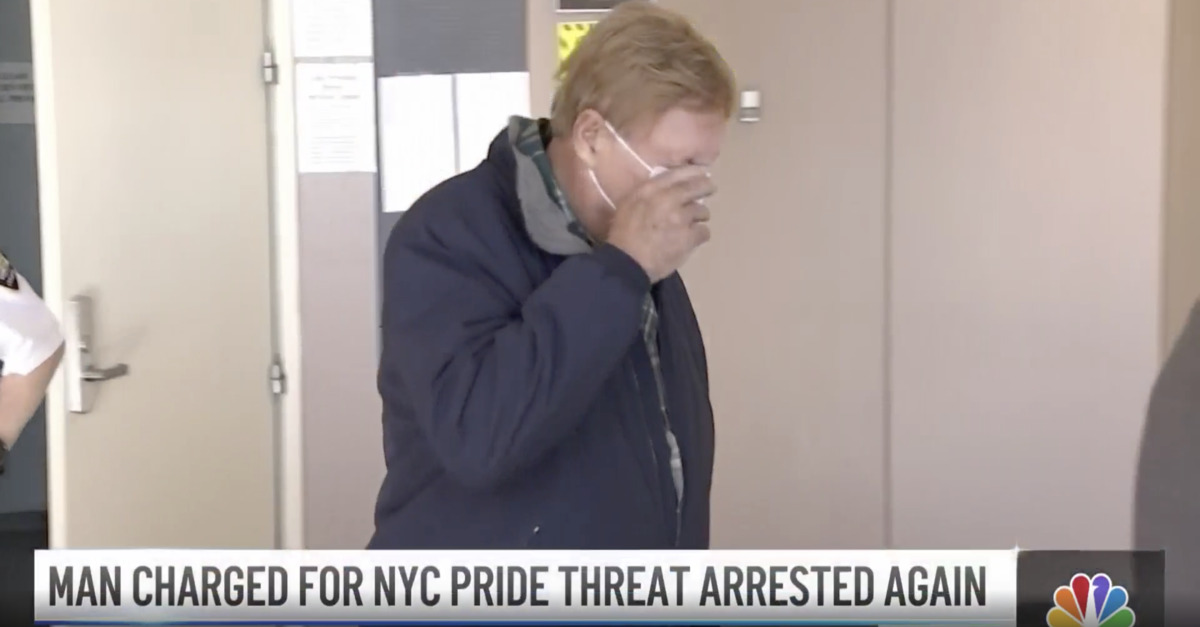 A septuagenarian New York State man was sentenced to nearly three years in prison over a series of hateful and threatening letters sent to LGBTQ individuals and affiliated business and organizations.

Robert Fehring, 74, pleaded guilty to one count of mailing threatening communications over a series of activities that occurred over a multi-year time period spanning June 2013 and September 2021.

According to a criminal information filed in the case earlier this year, Fehring used Post Office mailboxes to send “communications addressed to one or more other persons containing one or more threats to injure the person of the addressee and of another.”

In the Wednesday press release, the U.S. Department of Justice clarified that “many” of the defendant’s mailed messages, numbering over 60, “contained threats to kill, shoot, and bomb the recipients.”

Fehring was sentenced by U.S. District Judge Joanna Seybert to 30 months over the crime-wave of hate on Wednesday, Aug., 3, 2022.

“There is no room for hate in the Eastern District of New York. Today’s sentence makes clear that threats to kill and commit acts of violence against the LGBTQ+ community will be met with significant punishment,” U.S. Attorney Breon Peace said in a statement. “We will use the full power of our office to bring to justice those who threaten to kill or hurt people because of who they are, and to ensure everyone in our district is able to live authentically, safely and in peace.”

A lengthy sentencing memo by federal prosecutors contains numerous exhibits that identify just some of the voluminous threats Fehring sent to LGBTQ individuals and allies for nearly a decade.

“The defendant’s threats were designed to make—and did make—members of the LGBTQ+ community and those who support them live in fear,” the memo says. “The defendant has a First Amendment right to hold bigoted beliefs; he does not have a right to threaten people based on his bigoted beliefs.”

In one instance, Fehring referenced the Boston Marathon bombing. In a letter, he threatened violence against the CEO of a Long Island-based LGBTQ organization that would exceed that April 2013 incident.

THINK THE BOSTON INSANITY WAS INSANE?…. WAIT TIL YOU SEE THE PARADE IN HUNTINGTON ON SATURDAY!!!! WHOOPEE !!!!!!

A similar such missive was fired off in June 2014, this time targeting the same CEO and a local government office.

YOU’RE A FREAK…. WE KNOW WHERE YOUR LOCATIONS ARE…..WE KNOW NOW WHERE YOU LIVE…..AND WE’RE READY TO START ELIMINATING THE SCUM OF THE EARTH LIKE YOU….STARTING WITH YOUR FAG-FEST ACTIVITIES IN HUNTINGTON THIS SATURDAY…..THE PLACE WILL NEVER BE THE SAME. THINK BOSTON MARATHON YOU ANIMAL.

Increasingly graphic and homophobic communications followed. In June 2018, Fehring sent a letter to the owner-manager of a beach club in Long Beach, N.Y. that read, in relevant part: “Hosting the LI Pride fag-fest party? Be warned. There will be radio-controlled explosives planted in your establishment.”

In November 2021, federal agents executed a search warrant at Fehring’s home. After chasing him up the stairs and a brief standoff, he was arrested. A search of his home turned up numerous weapons and 20 LGBTQ Pride flags that had recently been stolen.

The following items were forfeited to the government:

For the theft of the stolen Pride flags, Fehring was charged locally by the Suffolk County District Attorney’s Office for felony grand larceny in the fourth degree. He is expected to plead guilty to that charge as well.

“Robert Fehring made heinous threats against members of the LGBTQ+ community in locations throughout New York, including Suffolk County, for nearly eight years,” Suffolk County Police Commissioner Rodney K. Harrison added. “Thanks to the tireless efforts of our department’s Hate Crimes Unit detectives and the diligent work of our law enforcement partners, Fehring is being held accountable for his crimes. This sentence reiterates that hate and intolerance have no place in Suffolk County.”

The defendant’s full sentencing memo is available below: