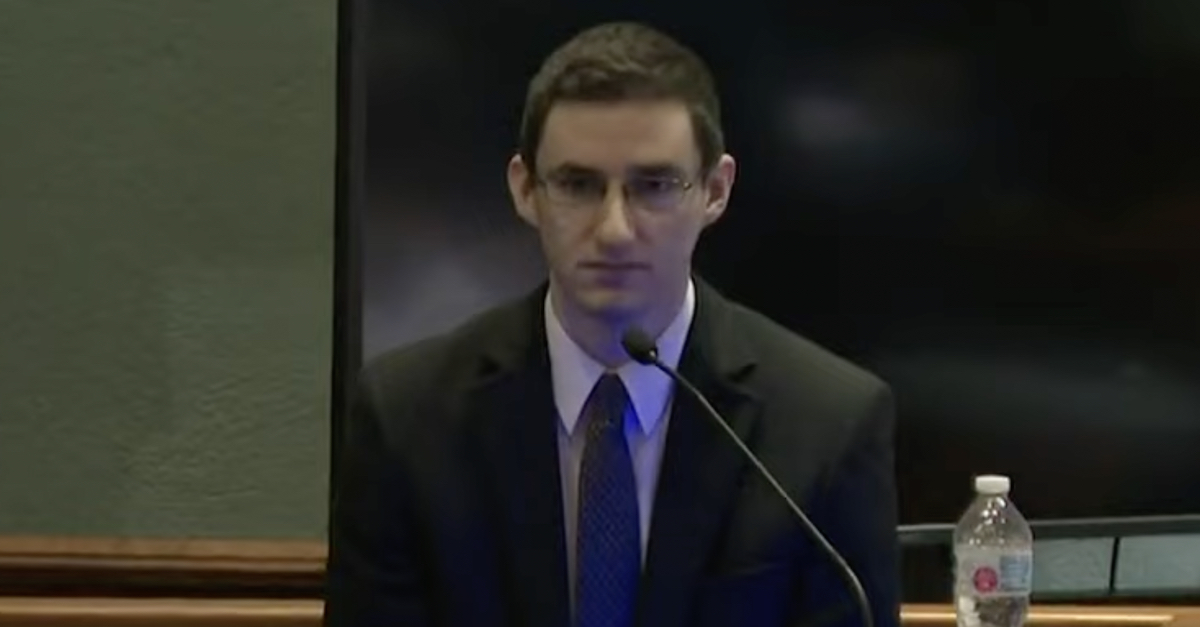 A Missouri man already convicted of murdering his wife, burying her body, and lying to investigators for months about what happened admitted to multiple charges of felony child abuse as well. Joseph Elledge on Tuesday formally pleaded guilty one count each of abuse or neglect of a child, first-degree endangering the welfare of a child, and third-degree domestic assault, court records reviewed by Law&Crime indicate.

The sentence breaks down as follows: four yeas for abuse and neglect, four years for endangering the welfare of a child, and two years for the domestic assault. Judge Crane ordered Elledge to serve his sentence for each charge consecutively. That 10-year sentence will also be served consecutive to the 28-year sentence he is already serving for killing his 28-year-old wife, Mengqi Ji, per Judge Crane’s order.

The abuse charges were initially filed against Elledge in October 2019, just after he filed a missing persons report for his wife, court records show. According to a report from The Associated Press, detectives accused Elledge of striking his toddler’s backside with such force that it caused “severe bruising.” Police reportedly recovered electronic devices that contained photographs and videos showing the child’s injuries.

Elledge’s indictment, as obtained by Columbia ABC affiliate KMIZ, stated that Elledge “knowingly causing a child less than 18-year-old, to suffer physical injury as a result of abuse by grabbing or striking the child.”

As previously reported by Law&Crime, a jury in Boone County in November found Elledge guilty of second-degree murder in his wife’s death. Following the verdict, Judge Brouck Jacobs sentenced Elledge to the maximum possible prison sentence of 28 years.

Elledge and Ji started dating in 2016 and were married on Sept. 22, 2017, according to The Columbia Daily Tribune. However, the honeymoon period did not last long, as testimony from the trial reportedly indicated that arguments and increased emotional distance in the relationship continued to mount until Elledge killed Ji in October 2019.

Prosecutors had initially charged Elledge with first-degree murder — contending that he “knowingly” killed Ji after engaging in “deliberation upon the matter.” Jurors were given the option to consider charges as low as involuntary manslaughter but ultimately chose a mid-level lesser offense. Under Missouri law, second-degree murder essentially entails knowingly killing another person without the element of premeditation.

Elledge testified at trial and insisted that his wife’s death was an accident. He reportedly claimed that the couple got into a shouting match on Oct. 8, 2019. He claimed the argument escalated into a shoving match, with Ji allegedly pushing him first. Ji allegedly fell into a kitchen counter after one of the pushes, Elledge reportedly said. He claimed she fell a second time following a push and that the two then went to bed separately.

“Her skin was cold” when he woke up the next morning, Elledge reportedly told the jury. He insisted that he failed to call authorities because he was terrified.

“It was stupid,” he said. “I was panicked. I wasn’t thinking at all, really.”

The defendant then lied to Ji’s mother and friend by saying his wife was missing and suggestion she had perhaps left the country. Elledge buried his slain wife in Rock Bridge State Park; she was found on March 25, 2020.

Boone County Prosecutor Dan Knight reportedly told Jefferson City CBS affiliate KRCG that his office reached a deal with Elledge’s defense attorney regarding the recent guilty plea. In exchange for Elledge’s admission of guilt in the child abuse case, Knight reportedly said that prosecutors will refrain from charging Elledge with more felonies stemming from his conviction for Ji’s murder. The additional felonies prosecutors were mulling over reportedly included abandonment of a corpse and several evidence tampering charges.

Elledge has already filed an appeal in his murder case. Under the terms of the latest plea agreement, if that appeal is successful, prosecutors would still be precluded from filing the additional felonies against Elledge.