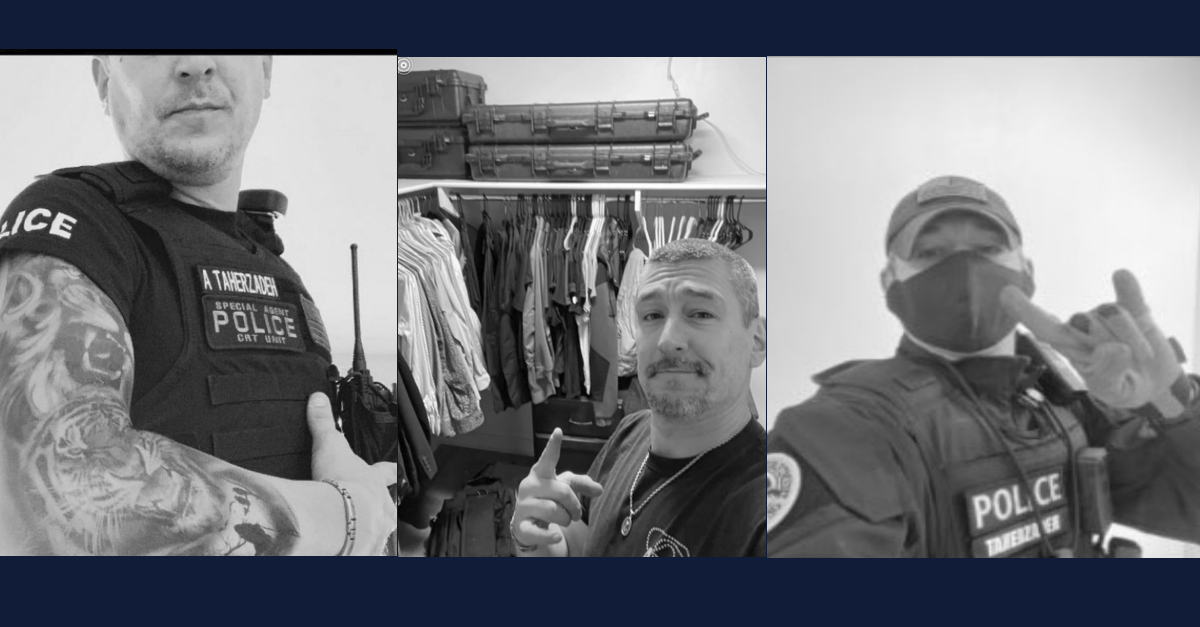 The FBI has arrested two men who they say posed as Homeland Security agents for years, using their false identities to get close to actual law enforcement officials, including a Secret Service agent assigned to the detail of First Lady Jill Biden.

Arian Taherzadeh, 40, and Haider Ali, 36, were arrested Wednesday following a late-afternoon raid at a Washington D.C. apartment complex where they both lived.

According to the probable cause affidavit in support of the men’s arrests, Taherzadeh and Ali had been posing as agents for the Department of Homeland Security since as early as February 2020.

“Taherzadeh and Ali, are not, in fact, employees of the Department of Homeland Security or any United States government agency,” the affidavit noted.

Their goal, according to prosecutors, was to “ingratiate themselves with members of federal law enforcement and the defense community.” Tahersadeh and Ali apparently targeted other residents of the building, many of whom were actual law enforcement officials and employees.

According to one witness, Taherzadeh had “made it clear that he is the ‘go-to guy’ if a resident needs anything in the building.” He allegedly provided “gifts or favors for residents, many of whom were members of law enforcement, including the FBI, USSS, or DHS, or employees of government agencies, including the Department of Defense and Navy.”

Those “gifts or favors” included loaning what Taherzadeh claimed was a “government vehicle” to one witness’ wife and providing her with a generator. Taherzadeh also allegedly offered to get the witness an AR-15-style rifle valued at around $2,000.

That witness, according to the affidavit, is a Secret Service agent currently assigned to Jill Biden’s detail.

According to the affidavit, Taherzadeh offered more than just a borrowed car and generators:

Specifically, Taherzadeh has provided members of the United States Secret Service (USSS) and an employee of DHS with, among other things, rent-free apartments (with a total yearly rent of over $40,000 per apartment), iPhones, surveillance systems, a drone, a flat screen television, a case for storing an assault rifle, a generator, and law enforcement paraphernalia. Taherzadeh also offered these individuals use of, what Taherzadeh represented to be ‘official government vehicles.'”

As of April 4, four members of the Secret Service have been placed on administrative leave pending further investigation, the affidavit said.

In support of their scheme, Taherzadeh and Ali allegedly obtained guns and assault rifles used by federal law enforcement agencies, as well as items carrying the insignias of those agencies.

Prosecutors say that they went so far to recruit someone to be an “employee of DHS” and “serve on their task force,” and subjected that person to what appears to be a painful hazing ritual.

“As part of the ‘recruitment process’ Taherzadeh and Ali required that the “applicant” be shot with an Airsoft rifle to evaluate their pain tolerance and reaction,” the affidavit says. “Subsequent to being shot, the applicant was informed that their hiring was in process.”

That applicant was “assigned” to conduct research on someone who “provided support to the Department of Defense and intelligence community,” the affidavit says.

The men’s alleged scam was busted by an inspector with the United States Postal Inspection Service who had visited the apartment complex where they live in connection with an alleged assault that took place at the building. Taherzadeh and Ali were interviewed as possible witnesses.

During the interview, both men self-identified as investigators with the U.S. Special Police Investigation Unit (USSP) and told the investigator that they had been deputized as “special police” by the D.C. government.

But according to the affidavit, USSP is a private company registered to an address associated with Taherzadeh.

Both men have been charged with one count each of false impersonation of an officer of the United States, a felony punishable by up to three years in prison.

According to Reuters, the DOJ will seek detention for both of the men, saying that one of them has bragged about having ties to Pakistani intelligence, while the other tried to destroy evidence on social media.

You can read the affidavit, below.