Man Kidnapped, Raped, and Impregnated 13-Year-Old Girl in North Carolina and Then Tried to Run Her Over: Cops 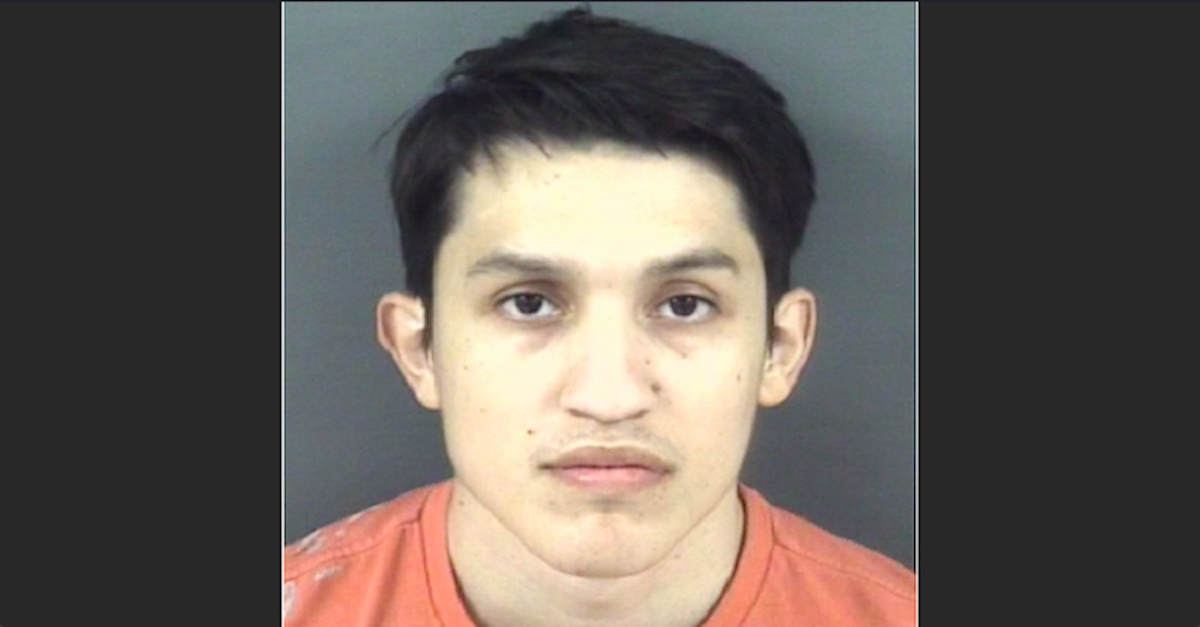 A 26-year-old man in North Carolina is facing a slew of felony criminal charges after police say he allegedly attempted to run over a 13-year-old girl he kidnapped, raped and impregnated.

Officers with the Fayetteville Police Department last Friday took Eduardo G. Rubio into custody and charged him with one count each of statutory rape, attempted first-degree murder, attempted murder of an unborn child, and first-degree kidnapping, as well as three counts of assault by strangulation, The Fayetteville Observer reported.

According to court documents obtained by the Observer, officers searching for the missing 13-year-old girl went to Rubio’s home located in the 400 block of Murray Fork Drive on Friday at approximately 3 p.m.

It was not immediately clear how long the girl had been missing or what evidence directed police to search Rubio’s home. The Fayetteville Police Department did not immediately respond to a message from Law&Crime seeking additional information on those points.

During the search, someone reportedly called the Fayetteville emergency dispatch center and reported that the missing girl was at a different apartment. The caller also reportedly said the girl’s face and head were visibly bruised.

Emergency Medical Services personnel responded to the call, picking up the girl and transporting her to Cape Fear Valley Medical Center where she was treated for injuries to her neck, face, shoulders, arms, and knees, the arrest warrant reportedly said.

While doctors were evaluating the girl’s injuries, she reportedly said that Rubio had been sexually assaulting her for approximately the last two years, with the abuse beginning when she was 11 years old.

The medical staff subsequently performed a sexual assault exam and discovered that the girl was approximately 4-and-a-half months pregnant, the document stated. The young victim, whose name was withheld from court documents, reportedly told doctors and investigators that she already knew she was pregnant and that the pregnancy was the result of being sexually abused by Rubio.

The girl further claimed Rubio was also aware of her pregnancy, and reportedly said that he used his own urine to falsify a pregnancy test the victim took during an October medical exam. The circumstances surrounding the October medical exam were not immediately clear and Law&Crime left a message with police seeking further clarification.

The warrant further stated that the victim told police she and Rubio got into a verbal altercation early Friday morning that quickly escalated and became physical, the Observer reported. During the fight, the victim reportedly said Rubio used his hands to choke her to the point that she lost consciousness at least three times. The fight allegedly took place near McFayden Lake, which is not far from Rubio’s home.

Per the report, the last time the victim was strangled unconscious, Rubio allegedly got in his car and attempted to run her over the victim with the intent to kill her and her unborn child. It’s unclear whether the vehicle struck the victim, but the warrant reportedly stated that she sustained “significant bruising, swelling, abrasions, and possible head trauma.”

An examination of Rubio showed he had several “fresh marks” on his body that he allegedly told police were the result of his physical altercation with the victim.

Records reviewed by Law&Crime show that Rubio was booked on Nov. 12 at the Cumberland County Jail, where he is currently being held without bond.