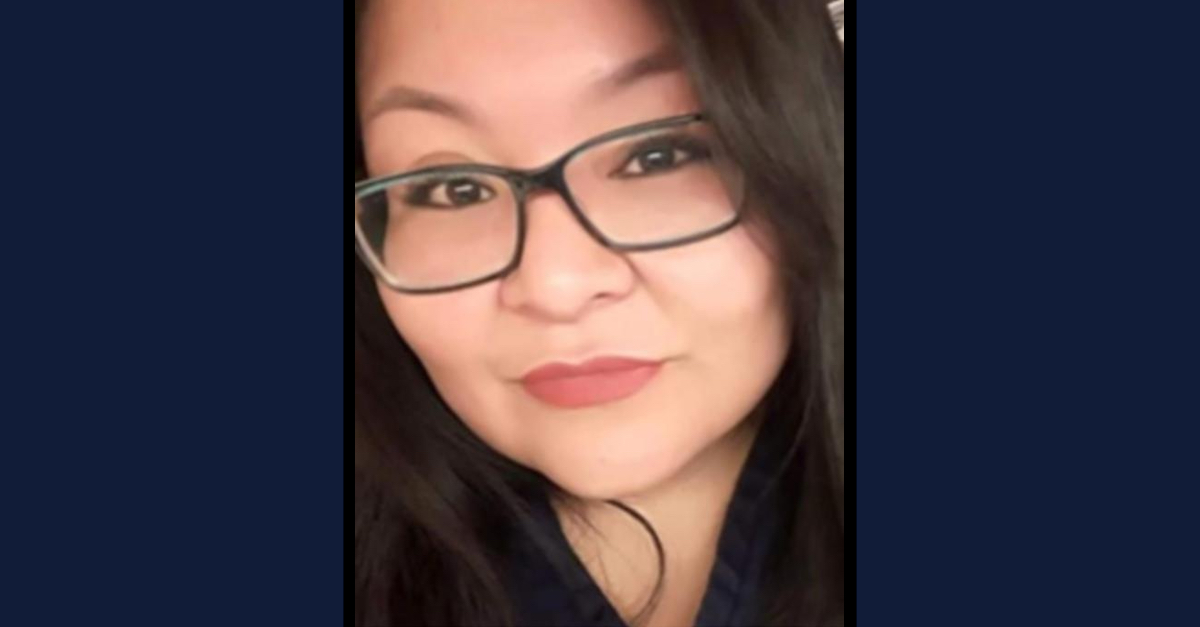 Jamie Yazzie appears in an image released by the FBI.

An Arizona man has been arrested on murder charges connected to the disappearance of a woman whose remains turned up on an Indian reservation more than two years after she vanished. According to federal court documents, Tre C. James, 30, of Pinon, Arizona, “was the last person to see the victim alive, on or about the early morning hours of July 1, 2019.”

An eight-count indictment unsealed this week alleges that James shot and killed Jamie Yazzie, also of Pinon, according to the U.S. Attorney’s Office for the District of Arizona.  Yazzie is identified in a criminal complaint James’ girlfriend.  James was arrested on Thursday, a federal court docket indicates.

The FBI previously said Yazzie worked as a nursing assistant.  She was 31 when she died.

Court documents say James and Yazzie were fighting about infidelity on the night of June 30, 2019 and into the morning of July 1, 2019.  It was later determined that Yazzie died from a “gunshot wound to the back of her head,” according to the criminal complaint.  Federal prosecutors said in a press release that Yazzie’s remains were found on the Hopi Indian Reservation in November 2021.

The first two counts of an indictment against James allege different theories of murder.  The first alleges murder with “premeditation and malice aforethought,” and the second alleges that the victim died via the use of a firearm.  Several other charges are connected to alleged domestic violence and assault incidents involving other victims.

According to federal court documents, several witnesses told federal authorities that the defendant had threatened Yazzie with a gun several times in the past.

The criminal complaint summarizes the alleged facts as follows:

TRE JAMES was the last person to see the victim alive, on or about the early morning hours of July 1, 2019. Two witnesses, J.N. and J.T.L. left the home of TRE JAMES, having witnessed TRE JAMES and the victim together, with no one else in the home. TRE JAMES and the victim had been arguing about infidelity on the night of June 30, 2019 and early July 1, 2019. Even though TRE JAMES was the boyfriend of the victim, J.Y. [Jamie Yazzie], he appears to have stopped efforts to contact her as of about 1:00pm on July 1, 2019. On or before 1:13am on July 1, 2019, the victim’s phone was either turned off or no longer working and efforts of family and friends to contact her were left unanswered. The victim failed to appear for work on the morning of July 1, 2019 as scheduled and has never been seen again by co-workers. The victim was killed by a gunshot wound to the back of her head.  On the night of June 30, 2019 and early morning July 1, 2019, J.N. saw TRE JAMES with a gun. The victim’s blood was identified in the bedroom of TRE JAMES. Spent shell casings were found there as well. In the days after July 1, 2019, TRE JAMES spent several days in his aunt’s home, where family witnessed TRE JAMES acting in a strange manner. His sister saw him with a handgun, and he was “aggressive, nervous and paranoid.”

According to the criminal complaint, the victim was staying in a house also occupied by the defendant’s grandmother.  A search of that home revealed “a spent 9mm casing, a spent .22 casing, a red-colored substance that appeared to be blood on the floor, and a white-colored substance that appeared to be a cleaning agent on the floor,” the complaint reads. 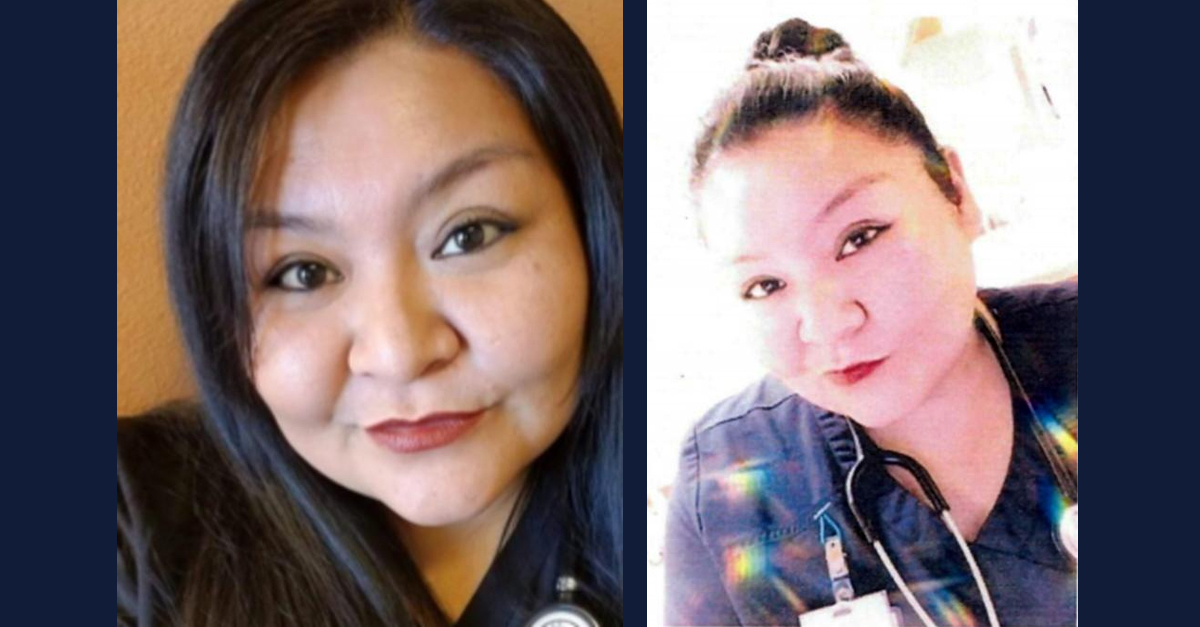 Jamie Yazzie appears in two images released by the FBI.

The defendant’s own sister provided key evidence, according to the complaint.  She allegedly said that “on June 30, 2019, she had received messages on Facebook Messenger from the victim, telling her that TRE JAMES shot two rounds off, and chased the victim back into the house.”  She also allegedly said the defendant “was aggressive, nervous, paranoid, and had a handgun” the week following the victim’s disappearance and that the defendant claimed not to know where the victim was located.

The criminal complaint continues by laying out a series of sordid accusations.  Yazzie is said to have been dating James while she was “legally” married to a man who was in jail at the time of her death.  James was alleged to have been seeing or at least was interested in another woman; Yazzie was said to have potentially been seeing another man other than James.

Yazzie’s brother — identified in the complaint as J.N. or by his nickname “Smurf” — and his girlfriend were allegedly hanging out with James and Yazzie on the night and morning in question, according to a 2019 interview with J.N. cited in the criminal complaint.

“It was just the four of them,” the document asserts.  “The victim was guzzling drinks. She was mad because TRE JAMES was cheating on her. The victim said she was going to leave. TRE JAMES told the victim she needed to go to sleep.”

Neither J.N. nor his girlfriend “wanted to be there,” the document continues, “so they left early that morning, on July 1, around 2:00 a.m.”  However, before they left, James allegedly told J.N. that he had “pieces” and showed J.N. a handgun and a shotgun.

The complaint says Yazzie’s remains turned up on Nov. 23, 2021, along with “a Pendleton-style blanket, blue tarp with rope, and other materials” that were sent for forensic testing.

Then came another round of police interviews.

During a Jan. 26, 2022 interview, James allegedly said Yazzie left his company during the morning hours of July 1, 2019, with her brother J.N. and her brother’s girlfriend.  James allegedly denied owning guns and denied being “rough” with Yazzie.

A subsequent interview with J.N. allegedly indicated that James “received a gun for his birthday,” that James showed J.N. the gun, and that J.N. heard an increasingly intoxicated Yazzie claim James had “pointed the gun at her” and “actually tried to shoot me with that.”

James, according to J.N., “tried to play it off: he said it was a misunderstanding, he was just playing around, and he had accidentally pulled the trigger.”  So went the events of the evening, according to the complaint.

After some additional conversation James and Yazzie, J.N. said he left the house with his girlfriend at the aforementioned time:  between 1:00 and 2:00 in the morning on July 1.

J.N.’s girlfriend, J.T.L., roughly corroborated the story, the complaint says.  However, she added that she saw “a bunch of weapons, including knives, swords, and what she thought was a homemade shotgun” in the home.  J.T.L. also said the defendant and the victim were fighting.

No one else saw Yazzie alive after that early morning departure, the authorities believe.

The feds allege that James committed other crimes as well.

A seventh count alleges strangulation of another intimate or dating partner identified as E.B. on or around June 22, 2021.

An eighth count alleges that James assaulted another victim, identified only as R.K., with a dangerous weapon and with the intent to cause bodily harm on or around April 8, 2018.

James appeared in court on Thursday and is scheduled for another hearing on Aug. 9 in Flagstaff, Arizona, according to the U.S. Attorney’s Office.

“The U.S. Attorney’s Office for the District of Arizona is committed to addressing the persistent violence endured by Native American families and communities in the state of Arizona, including by working with Tribal nations to address the important issues of missing or murdered indigenous persons and acts of domestic violence,” the office said.  “This office and the Department of Justice view this work as a priority for its law enforcement components.”

Read the criminal complaint, the indictment, the DOJ Press release, and the FBI’s missing poster for Yazzie in the reader below: