Man Charged with Fatally Stabbing Co-Worker Who Rebuffed His Romantic Advances in Florida: ‘She Was Afraid This Would Happen’ 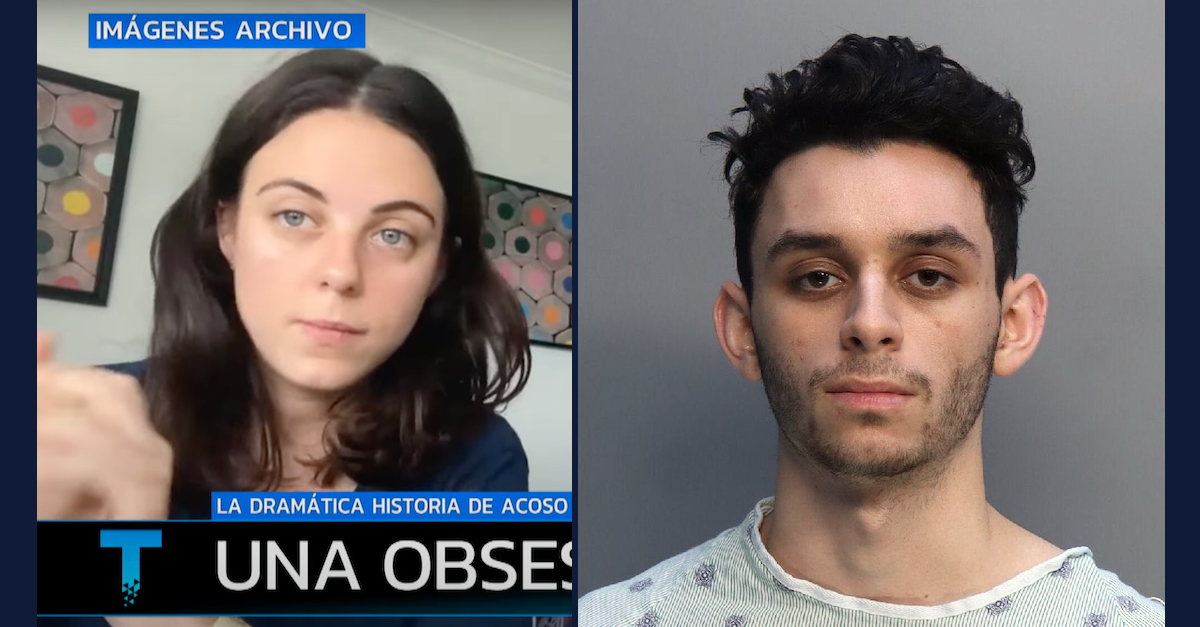 A man in Florida who was said to be romantically “obsessed” with a female co-worker who consistently rebuffed his advances was arrested last week and accused of stabbing her to death before turning the knife on himself. Officers with the Miami Beach Police Department took Agustin L. Mariani into custody and charged him with second-degree murder for allegedly killing 28-year-old Delfina Pan, The Miami Herald reported.

Mariani, a bartender, and Pan, a graphic designer and aspiring fashion designer, both worked at the Kansas Bar and Grill on Lincoln Road in Miami Beach and were reportedly both from Argentina.

According to a copy of the arrest report obtained by the Herald, police on Monday, Nov. 29 responded to a 911 call about a stabbing at an apartment complex located in the 7300 block of Harding Avenue at approximately 6:30 p.m. Upon arriving at the scene, first responders reportedly found a bleeding Mariani laying atop of a dying Pan just outside of the door to her apartment. Paramedics on the scene attempted life-saving procedures and rushed Pan and Mariani to Jackson Memorial Hospital. Pan was pronounced dead shortly after arriving but Mariani survived what authorities believe was his self-inflicted wound.

A neighbor and witness reportedly told investigators that Mariani went to Pan’s apartment “uninvited and waited for the victim.” When Pan arrived home, the neighbor reportedly said Mariani asked Pan if they could speak inside of her apartment. When Pan declined, Mariani reportedly “produced a knife and without being provoked began to stab the victim.”

After allegedly stabbing Pan multiple times, the neighbor told investigators that Mariani “ripped off” his own shirt and used the same knife to stab himself in the upper chest.

The Herald reported that the crime scene was “so gruesome that police who responded were given time off by the department to recover.”

The general manager at the Kansas Bar and Grill reportedly told investigators that a few hours before the fatal stabbing, Pan left work early for an unknown reason. She was supposed to work until 6:00 p.m. Mariani was reportedly supposed to work a double shift ending at 11:30 p.m., but the manager said he inexplicably left shortly after Pan’s departure. A knife missing from the restaurant reportedly matches the description of the weapon Mariani allegedly used to kill Pan.

In an interview with Today in 24, one of Pan’s co-workers said the victim mentioned that she feared Mariani following several awkward encounters with the man.

“She was afraid this would happen,” the friend, who wished to remain anonymous, reportedly told the news outlet. “He worked with us, a super strange boy and nobody knew anything about his life. He went to work and did not say hello to anyone.”

The co-worker reportedly said the harassment began about three months ago, when Mariani allegedly began professing his love to Pan on a near-daily basis. But the co-worker said Pan never led Mariani along and always tried to be polite in letting him down.

“They never had anything, what’s more, she was kind because of the fear she had of him,” she said adding that Mariani “was obsessed with my friend.”

After being released from the hospital, Mariani was booked into jail.  According to both jail and court records, the defendant is being held without bond in connection with hold by Immigrations and Customs Enforcement (ICE).  He’s charged with second-degree murder with a weapon, court records indicate.