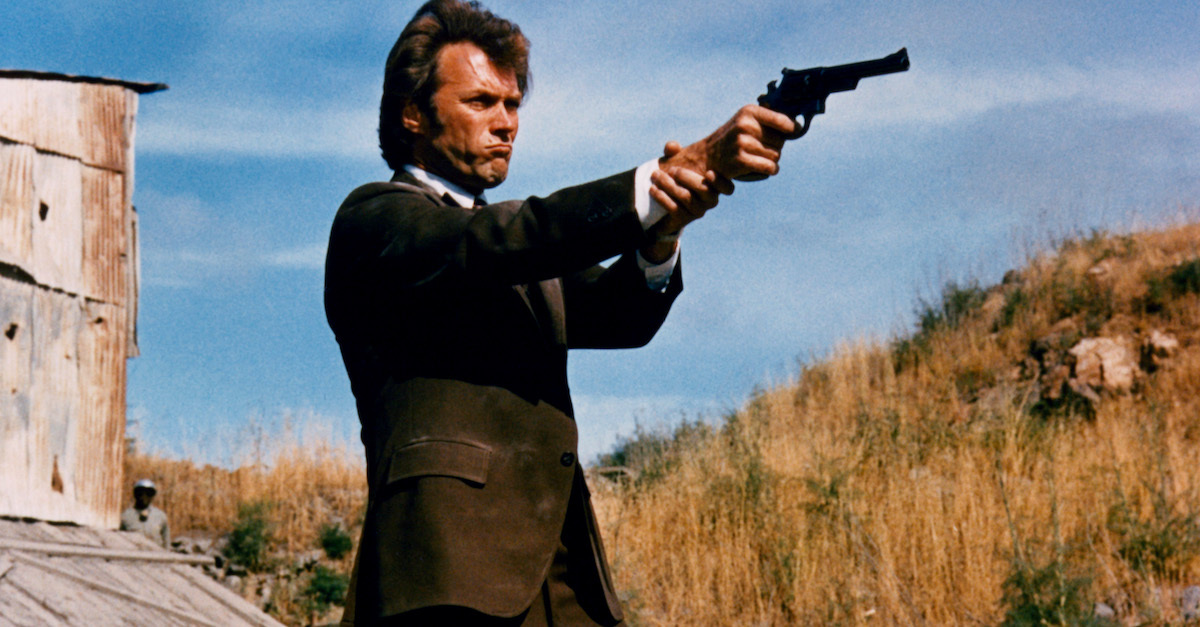 Clint Eastwood points a gun in a scene from the film ‘Dirty Harry’, 1971. (Photo by Warner Brothers/Getty Images)

The Colorado Supreme Court heard arguments Monday in the case of a man who says the state’s “Make My Day” law protects him from being prosecuted for shooting a man to death in his building’s shared basement.

The legal controversy is whether a basement shared by all tenants of a seven-unit apartment home is considered a “dwelling” for purposes of the state statute that allows people to use deadly force if they feel they are being threatened in their home.

Two lower courts in Colorado believe that it did and granted the accused’s motion to dismiss the murder charges against him.

“It Comes from an Old Clint Eastwood Movie”

Patrick Rau shot and killed Donald Russell, 37, in January 2017 during a confrontation in the basement of the house where Rau lived. The home had been subdivided into seven apartments; Rau and his girlfriend lived in one of them. All tenants shared access to the basement, which was uninhabitable, but also provided access to the apartments’ water and heat supply were kept.

On Jan. 19, 2017, Rau’s girlfriend noticed the door to the basement was open, and she told Rau that she believed a homeless person was there. Rau went to the basement wearing a headlamp and armed with a gun, finding Russell sleeping in the basement.

Using his foot to wake Russell, Rao told the man to leave. Russell became aggressive and began to yell and throw things around the basement, but not directly at Rau. Rau warned Russell that he would “count to five” before shooting him and if didn’t leave, and that’s exactly what happened: Rao counted to five; Russell didn’t leave, and Rao fatally shot him.

Rau was charged with second-degree murder.

In a motion to dismiss the case, Rau invoked the state’s so-called “Make My Day” law, which allows occupants to use deadly force in response to any physical force used against them in their home. It’s Colorado’s version of the Castle Doctrine, which is an exception to rules that require someone to retreat to before using deadly force. If a defendant is in his home—his “castle,” the thinking goes—he doesn’t have to retreat before using deadly force in self-defense.

The law, passed in 1985, hasn’t been amended to specifically address common areas in apartment buildings, leaving that interpretation up to the courts.

Rau’s defense attorney Timothy R. Bussey told the high court he is not fond of the statute’s name.

“Quite honestly, I don’t like the term ‘make my day,'” Bussey said. “It comes from an old Clint Eastwood movie. When you look at the title of the law [use of deadly physical force against an intruder], it’s really more appropriate to call it that, but I’ve also called it ‘Make My Day’ because that’s what’s been picked up.”

As a 1990 New York Times story noted: “The law’s nickname comes from the 1983 movie ‘Sudden Impact,’ in which Clint Eastwood, as Detective Harry Callahan, holds a gun on a criminal suspect and says, ‘Go ahead, make my day,’ daring the suspect to give him an excuse to shoot.”

Colorado’s law says that the state recognizes Colorado citizens’ “right to expect absolute safety within their own homes,” and allows them to use deadly force in response to even the slightest physical force:

The law protects occupants from both criminal prosecution and civil liability.

“Almost an Unheard of Grant of Authority”

The qualms Rau’s counsel expressed about its name aside, the statute turned out to be a boon for his client. The trial court said the statute applied to Rau, and dismissed the murder charge.

In June 2020, the appeals court affirmed the dismissal, finding that the basement of the building where Rau lived was part of his dwelling for purposes of the statute, even though it was also a common area.

Prosecutors had largely relied on a 1992 Colorado case that found that a basement of an apartment building wasn’t part of a resident’s dwelling for purposes of the statute, because all tenants had access to it.

The defense argued that, even though all tenants had access to the basement, it was a key part of each tenant’s dwelling, because it was the only way for each tenant to access controls for heat and water. The appellate court agreed.

On Monday, Rau’s defense lawyer said that the analysis of whether something is a dwelling could be done on a case-by-case basis, and that in this case, the lower court correctly found plenty of support for its finding.

“Only tenants could access [the basement],” Bussey argued. “It was locked. The room where the intruder was found had an additional lock that was broken off.”

Bussey also said that he didn’t like the name of the law, although he recognized its widespread use.

Deputy District Attorney Doyle Baker argued that judicial interpretation could provide important guidance to Colorado citizens who need to know whether they are in an area considered to be their dwelling, before deciding whether to use lethal force in self-defense.

“This is almost an unheard of grant of authority to people to use a lethal amount of force,” Baker said. “Because of that, it makes sense to put clear parameters on when it can be used. The question is, if you’re in a common area and you see somebody that you don’t recognize, and you’re not sure who they are, what if you make this decision—assuming other things happen, like you have a belief that a crime is being committed and [you anticipate physical force]—what if you guess wrong? What if this person is not an intruder?”

Parsing the language of the statute, the justices and attorneys debated whether the determination of what is considered a dwelling for purposes of the statute should be up to the courts, or the legislature.

The Colorado Supreme Court panel adjourned the arguments without a ruling.

You can read the order of the intermediate appellate court whose decision they are reviewing, below.