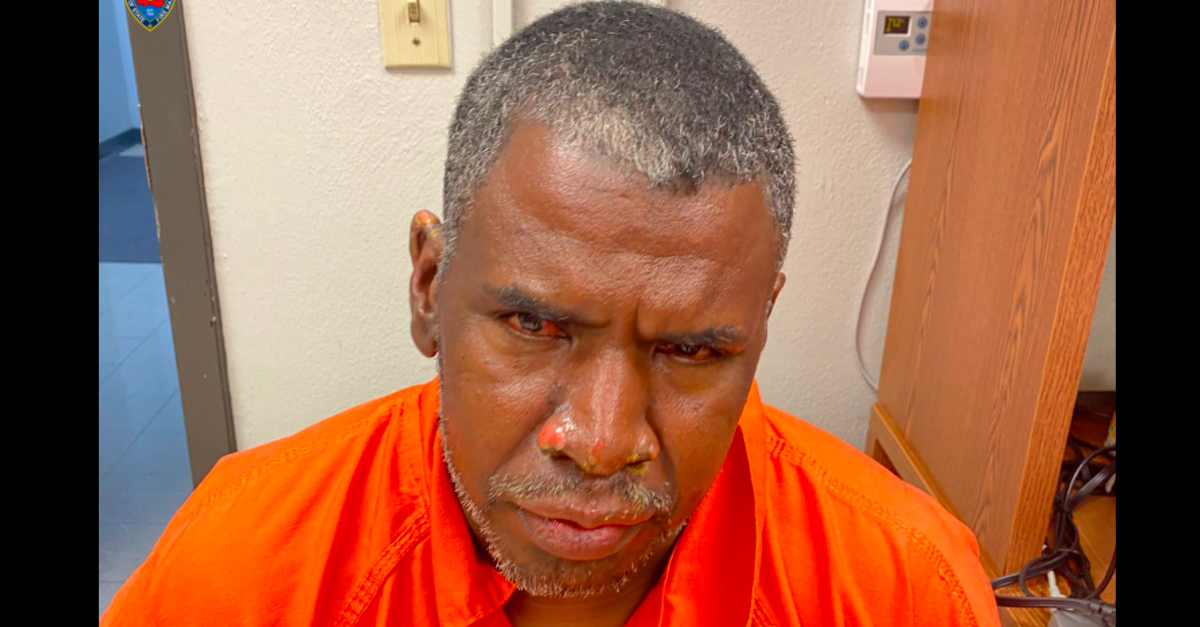 A Louisiana man is behind bars after allegedly setting fire to his girlfriend and young nephew during an argument over ending their relationship, local news outlets reported. The man’s 5-year-old nephew died while his girlfriend survived but remains in the hospital in critical condition.

Public records show that Derwin Drake Hamilton, 49, of Franklin, was taken into custody on Wednesday and booked into the St. Mary Parish Jail. He was charged with second-degree murder and second-degree attempted murder.

According to a press release from the Office of the Louisiana State Fire Marshal, at approximately 8 p.m. on Tuesday the Centerville Volunteer Fire Company and the Franklin Fire Department responded to a call in the Centerville community about a mobile home on fire.

Upon arriving at the scene, firefighters quickly located a female and a young child outside of the home, both of whom were “badly burned,” the fire marshal said. The identities of the two victims have not yet been released to the public.

The first responders found Hamilton outside of the mobile home as well. He had suffered only “minor burn injuries.” He was taken into custody by deputies with the St. Mary Parish Sheriff’s Office following statements made by the female burn victim and was then taken to a local hospital for treatment.

“SFM deputies learned that Hamilton and the female victim were in a relationship and were arguing about ending that relationship when the fire occurred,” Fire Marshal H. “Butch” Browning’s office said in a statement. “The woman reported to first responders that during the argument, Hamilton poured a liquid on her and the child, who is Hamilton’s great nephew, and then set them on fire.”

The sheriff’s office said that Hamilton corroborated the female victim’s account of what happened and he was booked after being released from the hospital.

“The ultimate danger is when fire is used to commit a crime,” Browning said, “In this instance, that crime resulted in the tragic death of an innocent child and left his guardian in critical condition. Our prayers go out to the victims’ families while we pursue justice on their behalf.”

Neighbors told local CBS-affiliate KLFY-TV that they tried to save the young boy’s life, and used a tractor to rip a hole in the bedroom wall of the mobile home where the child was trapped. The heroic effort freed the boy from the flames but it was too late.

“After we were able to get some of the tin lifted up off of the mobile home, we were able to see into the home where the smoke wasn’t because smoke rises. He was lying on the floor, so we grabbed him,” Derick Lovely, who lives next door, told the outlet. “It was like a movie, just terror. That’s all I can say about it. It was like terror.”

“She was pretty much on fire. Almost pretty much all of her clothes were burned off of her,” Lovely continued. “She screamed, ‘I’m on fire! Put me out! My kid is in the house! Help my kid, help my kid!’”

“When we first got him out, he did still have a pulse and a little faint heart rate. He took a few breaths and kind of spaced out, so we had hopes that maybe he would have made it,” Shane Boudreaux, another neighbor who was on the scene, said, adding I just can’t imagine what kind of animal would do such a thing.”

[image via Louisiana Department of Corrections]