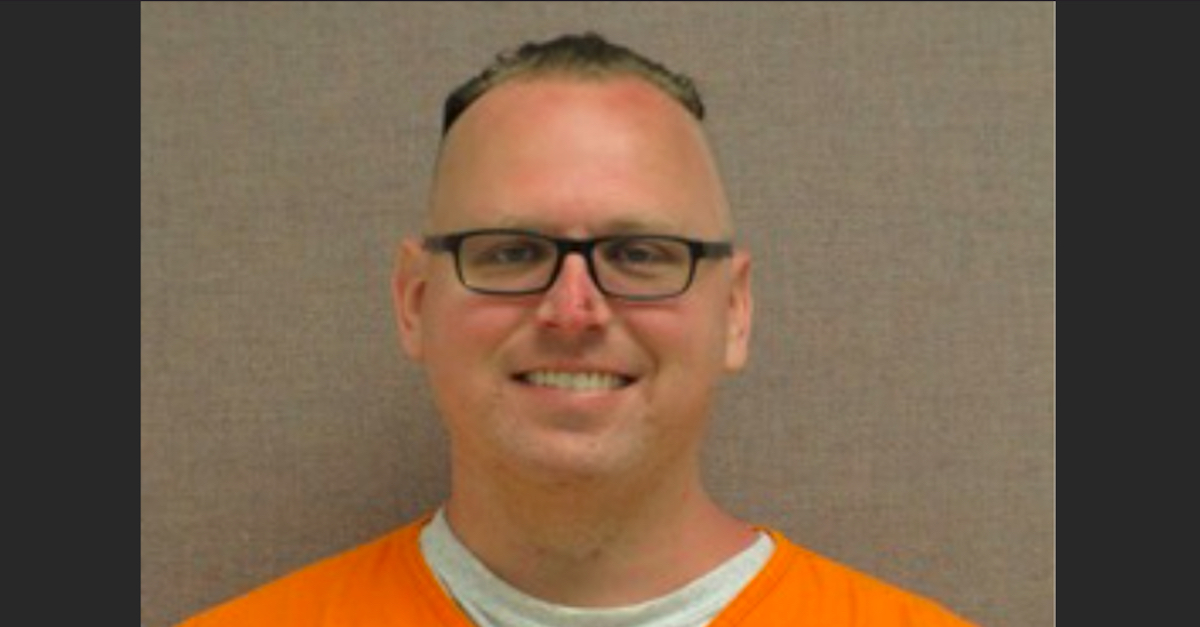 A former police officer in Oklahoma City who was convicted of murdering an unarmed suicidal man in 2017 was charged last Thursday, July 8, with 12 counts of felony possession child pornography, local news outlets reported.

Former officer Keith Patrick Sweeney, 36, was found guilty of second-degree murder in 2019 in connection with the 2017 shooting of 29-year-old Dustin Pigeon and sentenced to 10 years in prison.

According to a report from local CBS-affiliate News9, Sweeney was serving part of his sentence—from Jan. 29, 2020 to April 7, 2021—at the Marshall County Detention Center under protective custody, which is common for former police officers convicted of felonies.

Marshall County Sheriff Donald Yow said that in late March, an investigator with the Norman Police Department contacted his office in relation to possible cyber-crimes involving Sweeney that took place inside the facility. The investigator said Sweeney had sent and received pictures of child pornography over the jail’s wireless internet.

After an internal investigation, Yow said it was determined that a former jail administrator at the detention center had provided Sweeney with access to an iPad and given him an Internet box and the Wi-Fi password. Once he was able to access the Internet, the former officer was able to remotely access old files—some of which were allegedly child pornography—and share them.

“This incident should have never happened, and we are working very hard to keep and build trust in our communities,” Yow said in a statement. “I would ask that our citizens in which we serve, please not judge us on the actions of the prior jail administrator’s decisions. It has been addressed by the Marshall County Sheriff’s Office and is at the Marshall County District Attorney’s Office.”

Yow said he was unaware that the former administrator had given Sweeney internet access and had requested that charges be filed against him as an accessory to Sweeney’s alleged criminal conduct. The sheriff also noted that all of the passwords had been changed and his office had “confiscated all equipment that could be used like this again.”

Sweeney is now in state custody, with records showing that he is currently being held at the Joseph Harp Correctional Center in Lexington.

Sweeney in 2017 was one of several officers called to the courtyard of a housing complex in Southwest Oklahoma City after Pigeon called 911 and said he was going to kill himself, according to a report from the Oklahoman. When police arrived, a drunk Pigeon had doused himself in lighter fluid, and was holding a lighter, threatening to set himself on fire.

Body cam footage of the incident reportedly showed two officers attempting to de-escalate the situation when Sweeney came in with his gun drawn and yelled, “Drop it! I will fucking shoot you! Get on the ground!”

Pigeon then reportedly lowered his hands to his side and an officer fired a non-lethal beanbag round at his hip.

“About the same time, Sweeney fired five shots with his 9 mm handgun, striking Pigeon three times, including once in the heart,” the Oklahoman report stated.

The other officers on the scene said they did not draw their weapons because they saw “no indication” that Pigeon was a threat to their safety.

[image via Oklahoma Department of Corrections]