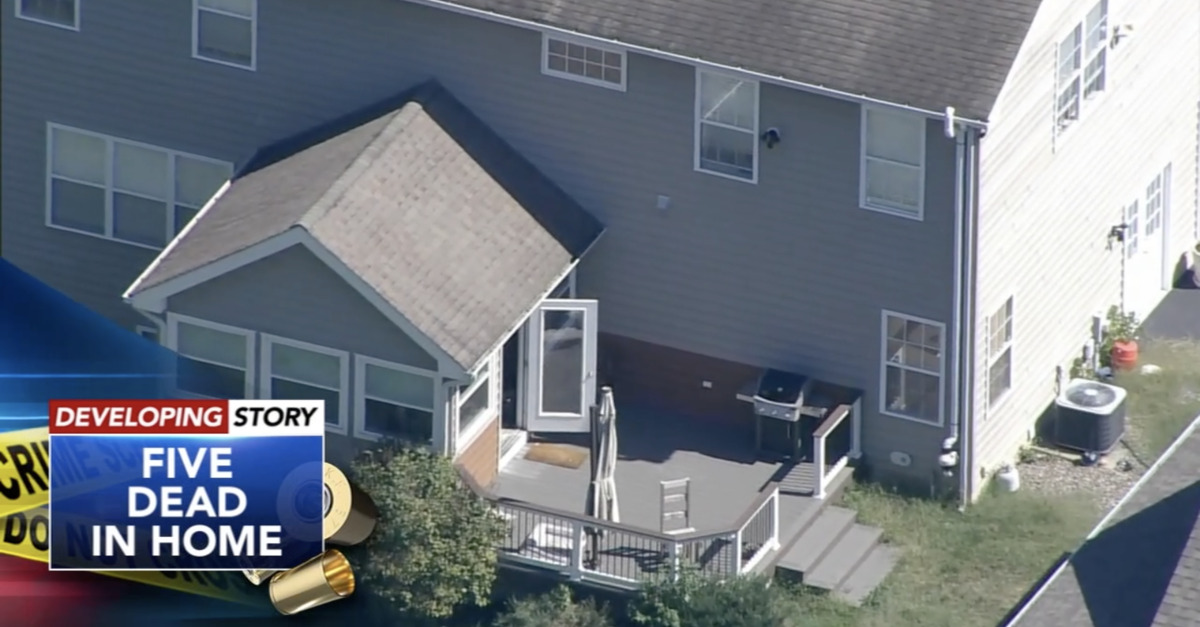 An image of the house where five people died on Sept. 9, 2022 in Elk Mills, Maryland.

Officials in Cecil County, Maryland, are searching for answers after three children and two adults were found shot to death in what appears to be a quadruple murder-suicide carried out inside a family home.

“Obviously, this is a tragic and terrible day for our county and our community,” Cecil County Sheriff Scott Adams said during a brief press conference late Friday afternoon.

According to the sheriff, deputies responded to a 911 call from a “male individual” who reported that three children and a woman were dead at the residence in the Elk Mills community. Deputies arrived at 9:29 a.m. and initially found someone dead inside a “detached garage.”

“It was very short,” Cecil County Sheriff’s Office Chief Deputy Gerald Widdoes said in response to a question about the 911 call that led to the awful discovery. “I know the subject hung up. We attempted many calls back to the residence that went unanswered.”

As the deputies made their way into the house, a grisly scene unfolded. Four more dead bodies were found throughout the property. All of the deceased appeared to have suffered gunshot wounds, the sheriff said, noting that the adult male had a semi-automatic handgun laying nearby.

The department said the bodies of the four presumed victims were found on two separate floors of the house: one on the first floor, three on the second floor. There apparently were no visible signs of a struggle.

Adams described the crime scene as “extensive” and said the effort necessitated the assistance of a Maryland State Police crime scene technician. Animal control was also called to care for pets left inside, which included at least one dog and two cats, an official said.

As to the age of the children, the sheriff said he could share their grade levels: they were fifth, seventh, and eighth grade students.

According to a report in the Cecil Whig, citing a Cecil County Public Schools spokesperson, all three of the children were homeschooled.

“Any time you have a loss to these levels – any loss is terrible, but a loss of this level, which is not a common thing, it’s certainly not a common thing here in Cecil County – it’s tragic and terrible and takes a long time for people to process,” Adams said.

When asked about his message to the community, the sheriff insisted that public safety was no longer a concern and that the incident was isolated – underscored by a reverse 911 call made to residents in the area to let them know everything was okay after local schools had previously gone into lockdown mode in response to the carnage.

Adams described the impact on first responders as “a horrible situation” and another official said that such a painful event took a toll on dispatchers, too, who listened on helplessly as the facts became clear.

Law enforcement was working through a search-and-seizure warrant as of Friday afternoon, the sheriff noted, while appearing at times uneasy about either holding back or sharing too much information.

“We have been unable to locate the next of kin for the adult male,” Adams said. “Therefore information is still limited.”

No shots were heard as deputies approached, and it was clear the killing had been done well before law enforcement arrived.

“We are actively trying to find [the] motive,” the sheriff said at one point in response to a question from a reporter, stressing that he still intended to tread lightly since law enforcement had not been able to contact next of kin. “But right now we don’t have that.”

Cecil County, which declared itself a Second Amendment sanctuary county in 2013, is located in the northeast part of Maryland and shares a border with Pennsylvania. The incident occurred in a semi-rural and partially-wooded part of the state roughly 60 miles north-northeast of Baltimore.