‘I Tried To Get It Stopped’: Man Says He Reported Pregnant Fiancée to Police After She Stole Guns and Fled. She’s Now Charged with Murdering Her Sister. 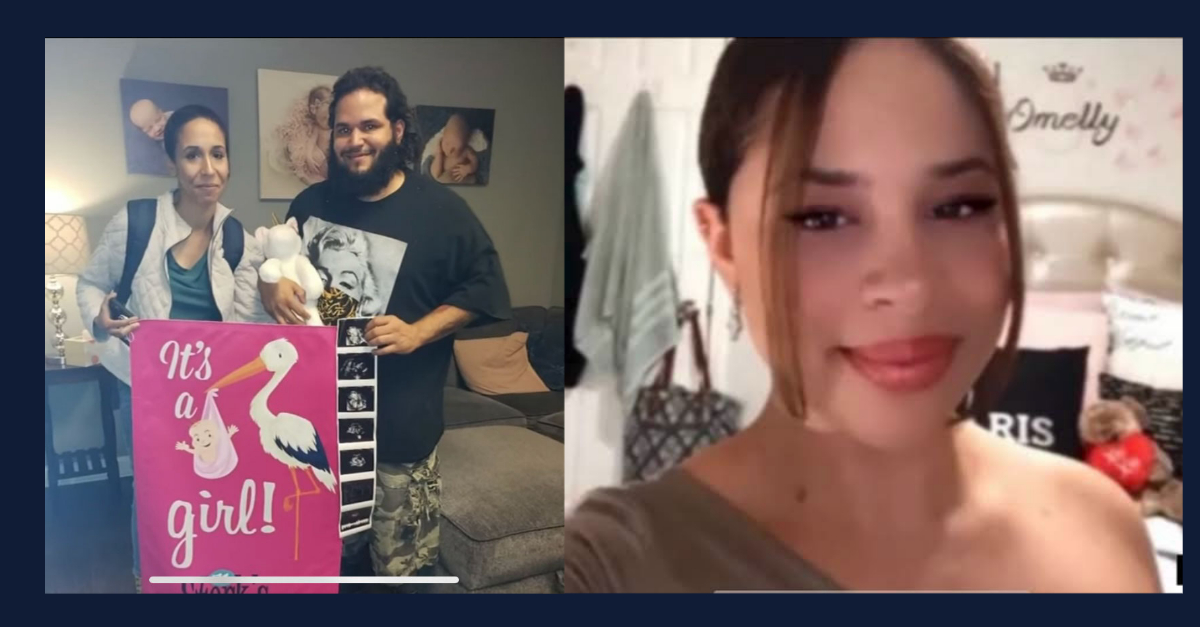 The fiancé of a woman charged with the murder of her sister claims he alerted authorities multiple times that his wife had fled with stolen guns.

Tony Miranda told local television station WJXT in Jacksonville, Fla., that he contacted Florida and New Jersey authorities to report that his fiancée, Angielly Dominguez, took off after stealing his car and five guns. He now says that a life could have been saved if law enforcement had stopped Dominguez and arrested her for theft.

Instead, according to a criminal complaint filed in Bergen County, Dominguez made it to New Jersey without being stopped. Once there, she allegedly shot her younger sister dead after the two argued about money.

“[Officers] told me because she’s my girlfriend — and because you guys have been together for three years roughly, and she’s pregnant with your child . . . it’s not necessarily stealing the items,” Miranda told WJXT. “Because she could come back. And I’m like — she’s in South Carolina.”

Miranda says he continued to track Dominguez as she traveled to New Jersey from Florida and eventually called authorities in Bayonne.

“I tried to get it stopped,” Miranda said during his interview with WJXT.

Dominguez, 27, is now charged with first-degree murder, possession of a firearm for an unlawful purpose, and hindering her own apprehension, according to New Jersey court records.

Her arrest came hours after officers with the Little Ferry Police Department responded to a report of a stabbing following a possible domestic incident. Those officers arrived to find 21-year-old Omelly Dominguez “deceased with a gunshot wound to the head.”

Angielly Dominguez fled the scene, according to Little Ferry Police Chief Jim Walters. But she was apprehended a short time later by New Jersey State Police in Cherry Hill, nearly 100 miles away from the crime scene.

Police later confirmed what Miranda had been telling various authorities for 24 hours at that point. Angielly was allegedly driving a stolen white Mustang and had five stolen guns in her trunk. 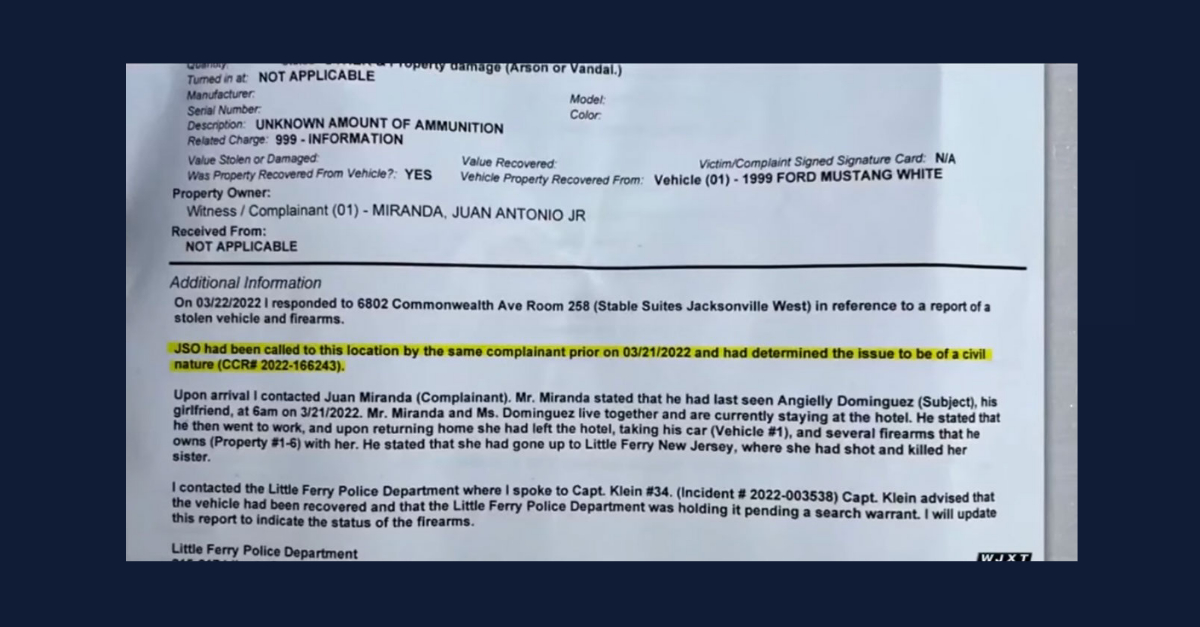 A Jacksonville Sheriff’s Office report (above) confirms that Miranda had tried to alert police.

Dominguez had driven from Jacksonville to her family’s home in Little Ferry overnight, a distance of just over 900 miles, authorities say.

It is unclear what prompted the long drive, but the complaint states that the suspect’s younger brother — a minor — returned home from school on Tuesday and heard his two sisters talking in the other room. The brother later told investigators that the talk between his sisters became heated when the topic of conversation switched to money. According to the complaint, he then entered the living room to find his sister had been shot in the head.

Angielly is being held at the Bergen County Jail (inmate record above).

Angielly stared at him briefly and then fled the scene, according to the complaint.

At least two surveillance cameras backed up that version of events, capturing Angielly with her weapon as she ran from the house and took off in her stolen vehicle, the complaint says.

Authorities say the brother immediately called 911, but by then, it was too late.

Angielly is being held at Bergen County Jail and will appear in court on Monday for a detention hearing.

She has no criminal record in the state before the recent charges but did rack up 40 traffic violations between 2014 and 2019, according to court records.

Angielly faces 30 years to life in prison if convicted of first-degree murder. Her fiancé is still in disbelief.

“She is scared of spiders,” Miranda said while speaking to WJXT. “She sees a roach on the floor, and she is terrified. I can’t believe she could do that.”

According to Miranda, Dominguez, who does not yet have an attorney in the case, has also struggled with mental issues.

“It’s devastating that she took her sister’s life with something that I feel could’ve really been prevented had they stopped her when I called to report all that this was stolen,” said an emotional Miranda. “And they see that she’s mentally unstable.”