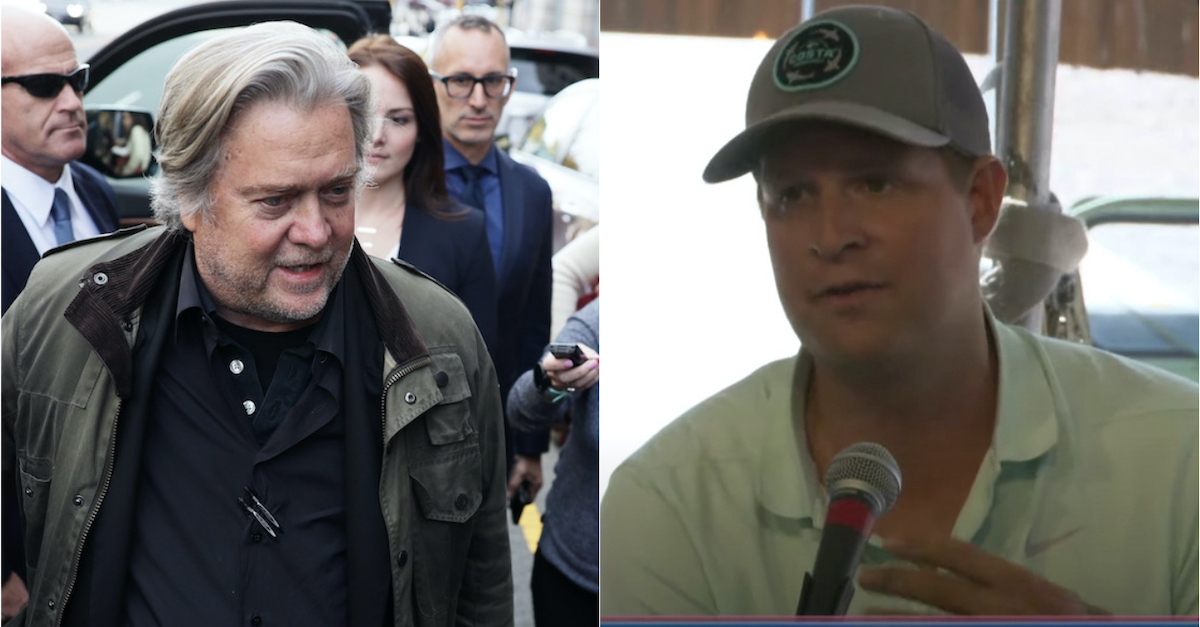 Federal prosecutors have “reached agreements in principle” with two of the remaining defendants in the We Build the Wall case previously associated with ex-White House strategist Steve Bannon, the government revealed in a court filing late on Friday.

In the twilight of his administration, Donald Trump pardoned Bannon for charges that he conspired to commit wire fraud and money laundering in connection with a crowdfunded effort to construct a barrier on the U.S.-Mexico border, but the former president left Bannon’s accused co-conspirators twisting in the wind on similar accusations.

Now, two of the three remaining defendants — We Build the Wall’s president Brian Kolfage and Timothy Shea — have signaled plans to “enter pleas of guilty to the certain charges” against them without a trial. Prosecutors said in February that the last, Andrew Badolato, was in the “final stages” of negotiations with the government, and they do not expect a trial to be necessary. If the three men’s plans hold, those developments would render “unnecessary the trial presently scheduled for May 16, 2022,” according to the government’s filing.

“The parties are in the process of formalizing their agreements and will submit executed copies thereof to the Court as soon as possible,” Assistant U.S. Attorney Nicolas Roos wrote in a one-page filing.

In August 2020, federal prosecutors charged Kolfage, Bannon, Badolato, and Shea with conspiring to defraud We Build the Wall’s donors. We Build the Wall allegedly promised that every penny raised would go to construction, but prosecutors said Bannon pocketed $1 million. Kolfage took $350,000 plus went on a spending spree to buy a Jupiter Marine yacht called the Warfighter, a Range Rover SUV, a golf cart, jewelry, and cosmetic surgery, according to the indictment.

Trump pardoned only Bannon, his former chief strategist, of the relevant charges before leaving office.

“In light of these developments, the parties jointly request that the Court adjourn sine die the parties’ pretrial filing deadlines presently set for March 28, 2022, and April 4, 2022, and schedule change of plea hearings for both defendants — during the week of March 28, 2022 for Shea and during the week of April 11, 2022 for Kolfage,” prosecutors wrote. “Kolfage and Shea both request, without objection from the government, that the change of plea hearings be held remotely.”

In addition to his indictment in the Southern District of New York, Kolfage was charged separately in the Northern District of Florida for alleged tax offenses. Those will be transferred to New York and resolved during his change of plea hearing here, prosecutors say.

In pardoning Bannon right before leaving office, Trump did not supply any rationale for granting his former strategist a reprieve and not the other three.

“Prosecutors pursued Mr. Bannon with charges related to fraud stemming from his involvement in a political project,” the White House’s statement read at the time. “Mr. Bannon has been an important leader in the conservative movement and is known for his political acumen.”