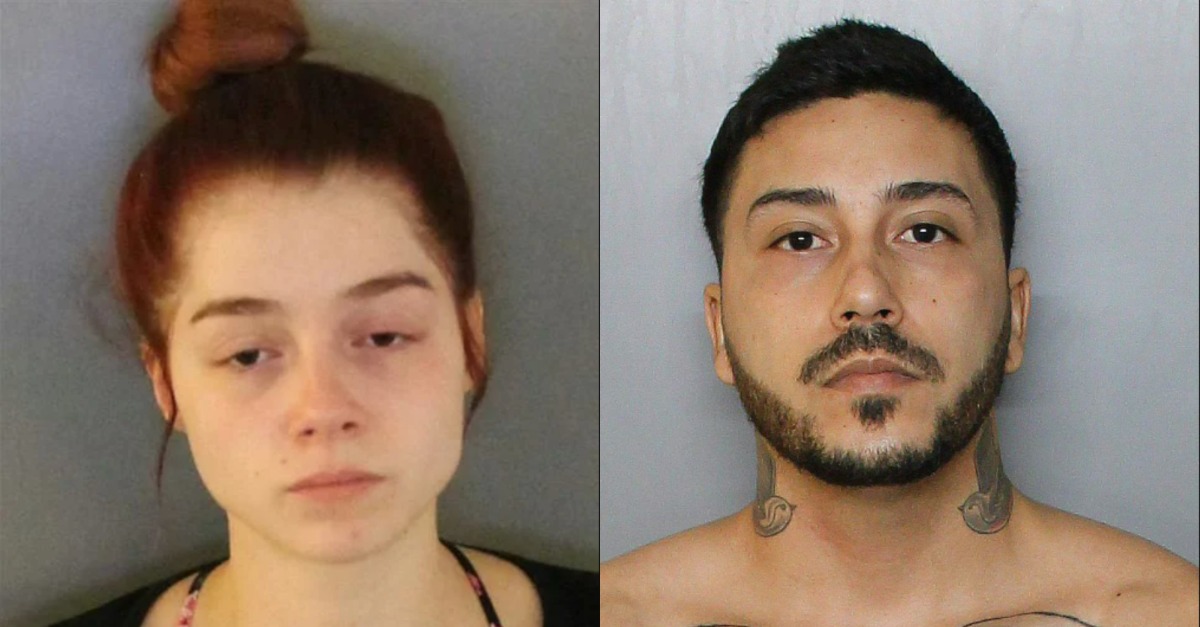 A Florida woman’s wild sentencing hearing on child abuse charges ended with her husband being arrested as well.

Crystal Ashley Carrasquillo, 24, was sentenced to 10 years in prison on Friday after pleading guilty to one count of aggravated child abuse in August. She was originally charged and arrested in 2018.

According to a news release by Twentieth Judicial Circuit State’s Attorney Amira Fox, the defendant will also be forced to undergo a mental health evaluation and complete follow-up treatment.

Trial in the case was previously scheduled for late August of this year when Carrasquillo instead opted out of her right to a trial by jury.

“[T]he defendant decided to make an open plea to the court,” the state’s attorney’s office noted. “That is when the defendant gives up their right to a jury trial and pleas straight to the judge for sentencing. It is not a plea agreement.”

Multiple members of Carrasquillo’s family attended the court proceedings, according to the Charlotte County Sheriff’s Office.

The defendant’s husband was one of those attendees. By the end of the day he had been Tasered and ended up behind bars.

Gregory Carrasquillo, 35, stands accused of one count of resisting without violence over his alleged courtroom behavior.

The sheriff’s office alleges that Gregory Carrasquillo first stood up during the sentencing hearing and asked to speak with the judge but was told to sit down by bailiffs and quickly complied.

That compliance was allegedly all-too transitory.

As Crystal Carrasquillo was sentenced, her husband allegedly stood up in the middle of the judge’s formal reading of the punishment, jumped over the bar and tried to make contact with his wife.

“Bailiffs intercepted and restrained Gregory, who proceeded to resist,” the sheriff’s office alleges. “At that time, one of the deputies deployed their taser, successfully contacting Gregory on his lower body. Gregory then complied and was placed under arrest.”

Charlotte County Sheriff Bill Prummell addressed the incident in a statement praising the bailiffs for their actions.

“Bailiffs play an important role in the courtroom throughout the administration of justice,” the sheriff said. “They provide security not only to the judge, but to all parties in the room at all times. While I understand these proceedings can elicit an emotional response from loved ones, my bailiffs simply cannot allow an outburst of this kind. Their actions were swift, appropriate, and necessary to ensure the safety of everyone.”

Crystal Carrasquillo was arrested in 2018 after her then-4-month-old child was taken to the Fawcett Memorial Hospital in Port Charlotte, Fla. because the baby was having trouble breathing. Medical staff examined the infant to find that the child had “numerous broken bones in various stages of healing,” according to the state’s attorney’s office.

The Port Charlotte Sun reports that the child’s injuries included fractures to their rib cage and skull and a possible fracture on one of their shoulder blades. During the initial investigation, the defendant reportedly told deputies that she had blacked out repeatedly while harming her child during moments of intense stress.

Some of Crystal Carrasquillo’s case file is below: