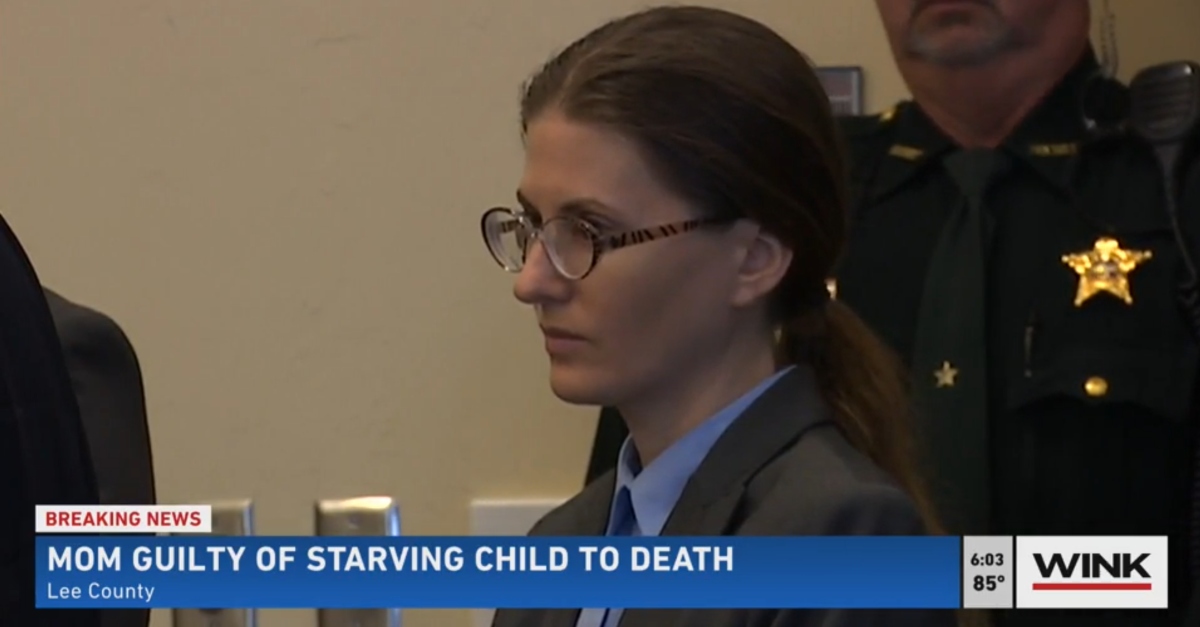 Jurors in Florida have convicted a vegan mother of murdering her toddler son by malnutrition.

Ezra, who was just 18 months old, died on Sept. 27, 2019, in Cape Coral, Florida, of “starvation and extreme lack of care,” said the office of State Attorney Amira Fox.

Sheila and Ezra’s father, Ryan Patrick O’Leary, were charged in December of that year with first-degree murder, aggravated child abuse, aggravated manslaughter of a child, child abuse, and two counts of child neglect in the December following Ezra’s death.

“The evidence and crime scene in this case are gut-wrenching,” Fox said at the time Sheila and Ryan O’Leary were charged. “These are images as a mother and State Attorney I will not be able to forget. I commend the detectives and officers with the Cape Coral Police Department for their difficult task of dealing with the horrendous nature of this case.”

Authorities said Sheila knew better than to let her son starve, especially in light of the fact that she and her ex-husband, with whom Sheila has a daughter, had previously taken a court-ordered parenting class after their little girl had been diagnosed with failure to thrive.

“It was a class to educate new parents … or parents in general,” Khang Chen, Sheila’s former spouse, testified. “How to raise a healthy child.”

The couple, living in Virginia at the time, had been ordered by Child Protective Services to take the parenting class.

“She knew what she needed to do,” Florida prosecutor Francine Donnorummo said of Sheila in closing arguments on Tuesday. “Ignorance is not a defense in this case.”

“The evidence shown at trial proved the child died due to complications from severe malnutrition and dehydration,” prosecutors said, adding that Ezra wasn’t the only victim. “Three other victims, a 3-year-old boy, a 5-year-old boy and an 11-year-old girl, also suffered from extreme neglect and child abuse.”

#BREAKING: Sheila O’Leary of Cape Coral is convicted of 1st degree murder in the death of her 18-month old baby. She and her husband were accused of starving the baby to death in a disturbing abuse investigation involving 4 children.

The O’Learys reportedly told officers they fed their children a strict vegan diet of raw fruits and vegetables. The toddler also had breast milk, the couple said.

“This child did not eat,” Donnorummo said. “He was starved to death over 18 months.”

She described Ezra’s condition as chronic. Sheila had told investigators that Ezra had not eaten for a week, and he was having trouble sleeping the night before he died, according to Donnorummo.

Sheila had made choices that killed him, the prosecutor said.

“Her pride cost Ezra his life,” Donnorummo said. “It is a reckless disregard for human life.”

Defense lawyer Lee Hollander showed jurors pictures from the phone of Sheila and the daughter she shares with Chen.

“Does that look like a mom who wants to kill her kid?” he said. “Just because it happened doesn’t mean she committed a crime.”

Hollander maintained that there was no evidence of medical neglect, and that the medical examiner determined Ezra’s death was an accident.

Co-prosecutor Sara Miller maintained that Sheila knowingly refused to get medical care for the toddler, choosing to disregard his suffering and cries.

Sheila is scheduled for sentencing on July 25.