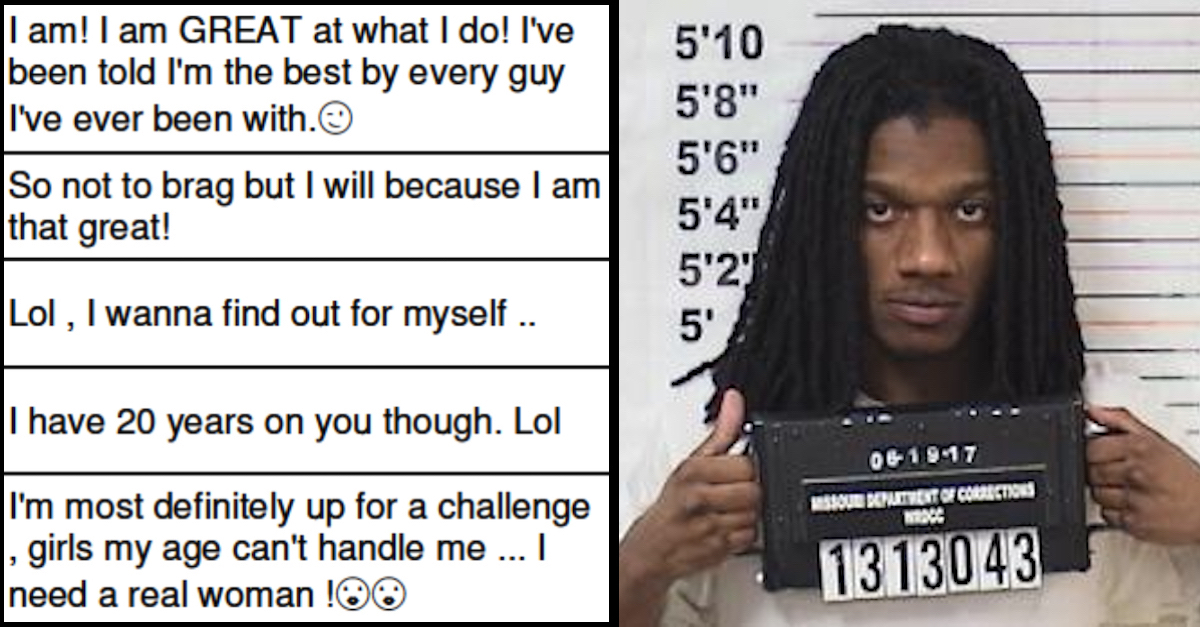 A reportedly since-fired Jackson County, Missouri public defender has been sentenced to federal prison for smuggling heroin to a prison inmate “with whom she had a romantic relationship,” the U.S. Attorney’s Office for the Western District of Missouri announced on Tuesday.

Juliane L. Colby, 44, of Shawnee, Kansas, will spend one year and one month behind bars, the DOJ said. Court records say she must serve three years on supervised release when the term of incarceration concludes.

The sentence is not eligible for parole. Colby pleaded guilty on Feb. 8 to one count of conspiracy to distribute heroin.

Colby was caught and prosecuted at the state level for helping the inmate 20 years her junior obtain a smuggled cell phone behind bars. A diversion agreement entered in connection with that state court proceeding wasn’t enough to stop her from later admittedly smuggling the drugs, according to documents at both the state and federal levels.

The DOJ summarized the drug smuggling charges as follows:

Colby admitted that she conspired with others to smuggle heroin to an inmate at the Western Missouri Correctional Center, identified in court documents as Conspirator 1, from Aug. 1 to Aug. 10, 2019.

Colby hid the heroin in an envelope marked as “Legal Mail” that also contained numerous pleadings and documents from an inactive criminal court case along with photos of herself. Eight small baggies that contained a total of 3.25 grams of black tar heroin were taped behind the flap of the envelope. The envelope was labeled with a fictitious return address for a law firm and addressed to another inmate, identified in court documents as Conspirator 2, who was housed in the same unit as Conspirator 1.

“Conspirator 1” appears to be the man identified in separate state court proceedings as Ce-Antonyo D. Kennedy, 24. Colby was listed as a member of Kennedy’s defense team — specifically as a “mitigation specialist” — in those state court papers. 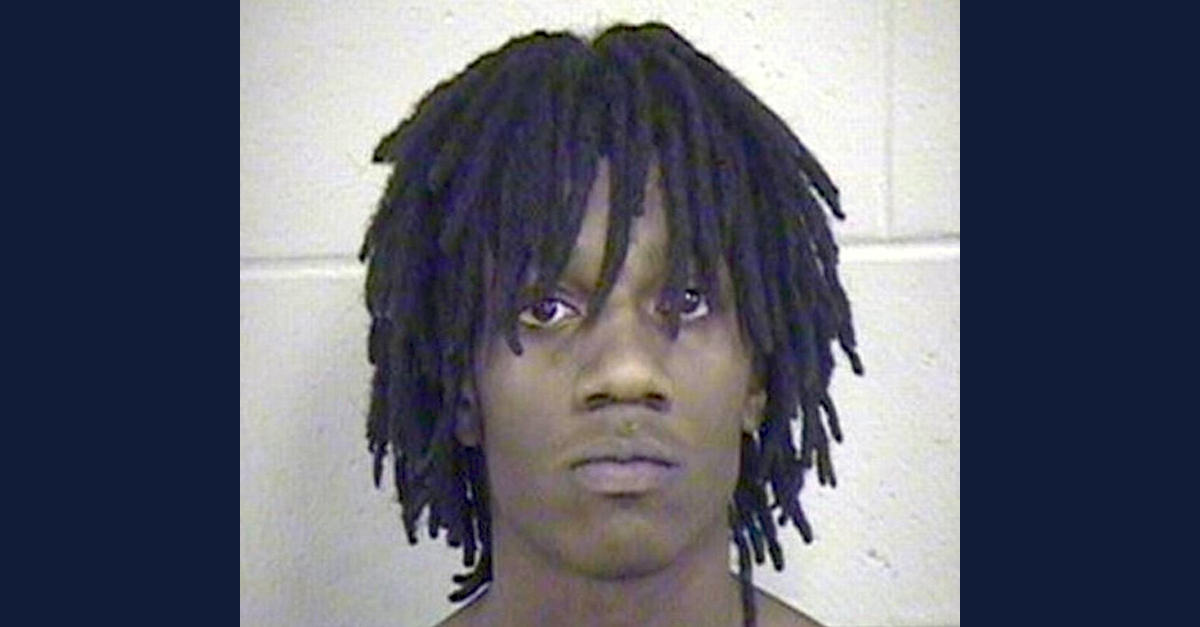 Ce-Antonyo Kennedy appears in a mugshot.

A state court docket indicates that Kennedy was convicted on April 11, 2017 of murder and of committing an “armed criminal action.” Those charges were filed on Jan. 11, 2015.  Though Kennedy was originally charged with first-degree murder, a Missouri Department of Corrections directory says he was convicted of second-degree murder; a series of press releases from the Jackson County prosecutor’s office also lists second-degree murder as the charge at conviction. The murder case involved the death of a 14-year-old girl, the prosecutor’s office said.

Colby was not listed among the counsel of record in the underlying murder case.

The DOJ said Colby “began a romantic relationship with Conspirator 1 while she was working as an attorney on his defense team with the state public defender’s office in 2017.” 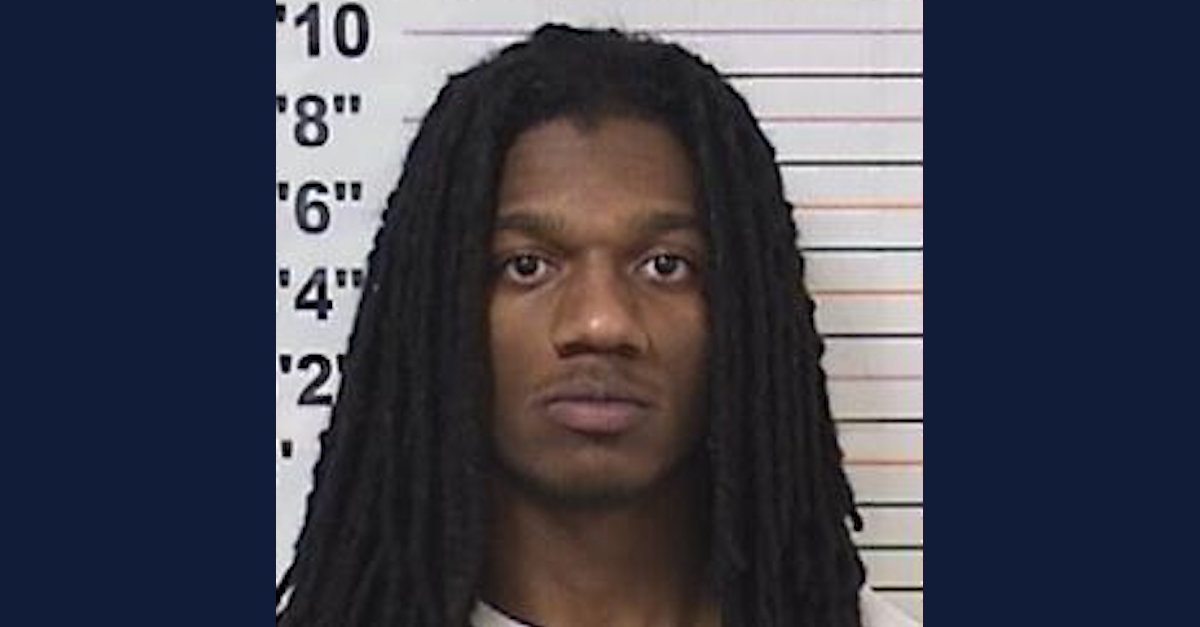 The investigation unfolded when Kennedy’s jailers discovered him with a smuggled cell phone. Colby used the phone to communicate with Kennedy. Colby was charged in state court for facilitating the provision of the cell phone to Kennedy while the latter was in jail; the U.S. DOJ noted that she “entered a diversion agreement, which she successfully completed on May 14, 2019.”

Accordingly, the state charges were dismissed. 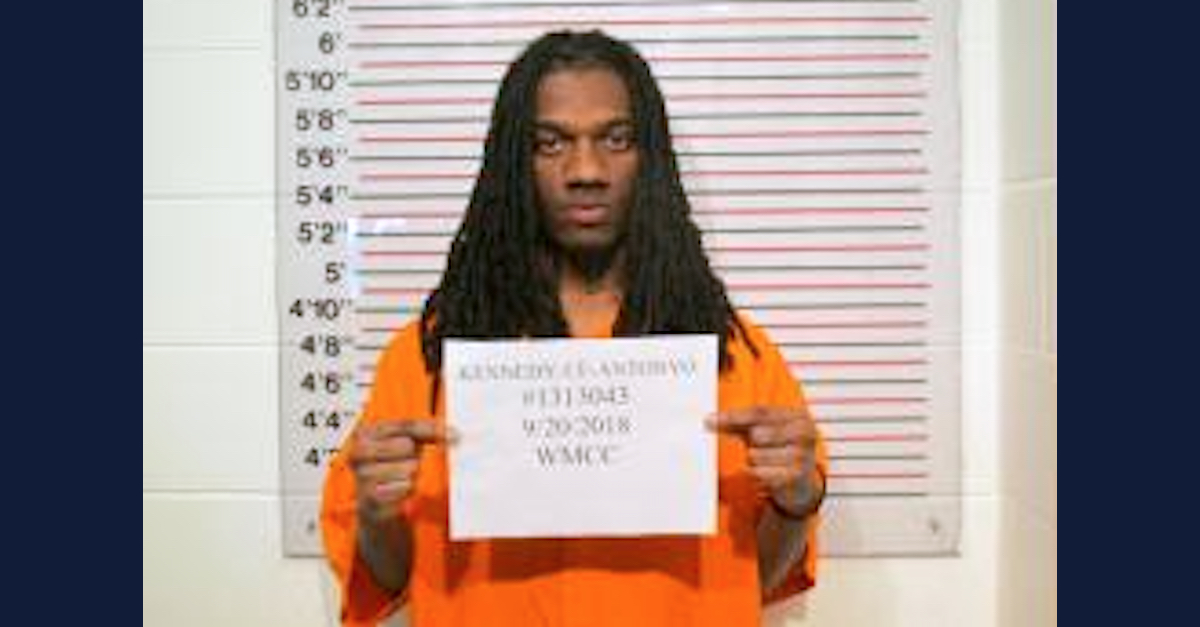 “In August 2019, Colby regularly visited Conspirator 1 at the Cameron correctional center, where he was serving a sentence for his murder conviction,” the DOJ continued.  “Colby and Conspirator 1 had a series of phone conversations during which they used a variety of code words to discuss the plan to mail heroin and contraband into the center. During these calls, Colby and Conspirator 1 also discussed a previous successful delivery of heroin. These calls were monitored and recorded by the correctional center.”

The case unraveled further from there. 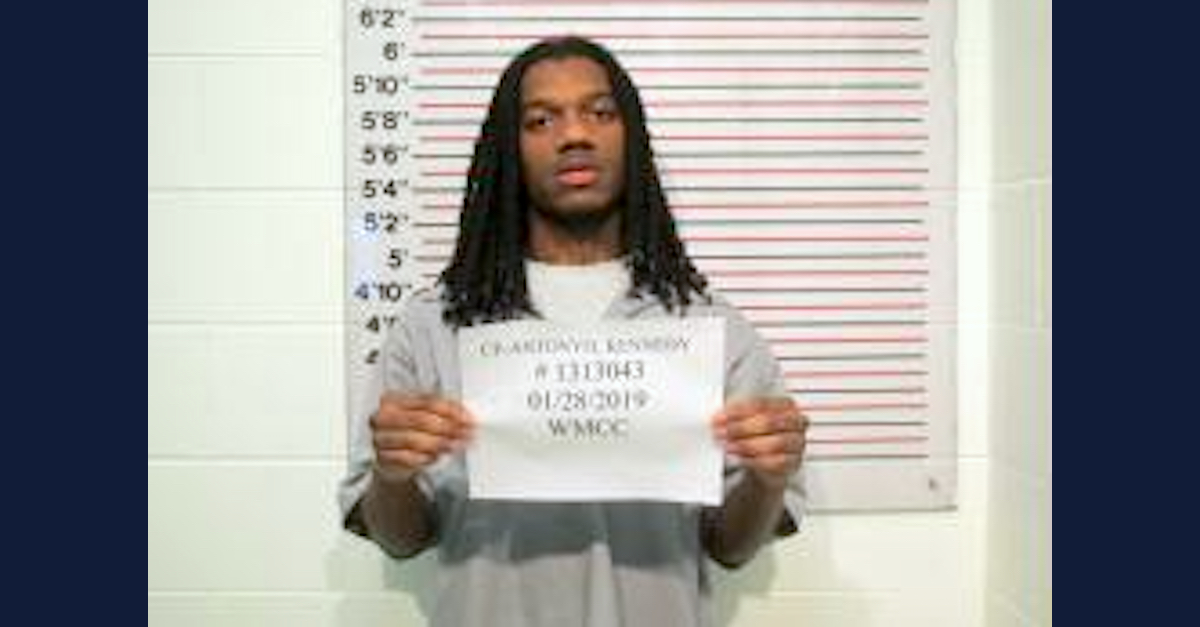 The original federal indictment against Colby alleged four counts: one count of conspiracy to distribute heroin, two counts involving the use of a communication facility, and one count of attempted distribution of heroin.

A sentencing memorandum indicates that the government sought an 18-month sentence on charges that originally could have technically carried a 20-year sentence.

The government argued that the defendant’s special skills should result in a tougher sentence:

At the time of the offense, the Missouri Department of Corrections processed and delivered legal mail differently than regular mail to protect confidential attorney-client communications. Where ordinary mail would be subject to search by staff working in the mail room, the procedure for legal mail required that it be opened by an inmate’s case manager in the presence of the inmate.

Here, the defendant’s prior legal training and work experience—including her work meeting with inmates as an employee of the Public Defender—were utilized in the effort to avoid correctional officers’ detection of heroin by concealing it in an envelope marked with the term “legal mail.” The envelope’s markings also represented that the envelope was sent from a law firm and its contents included case pleadings and legal documents.

Therefore, the defendant utilized both her status and experience as an attorney to circumvent the normal and appropriate review of inmate mail. Specifically, using her experience— and marking her mailing as “legal mail”—the defendant sought to create a situation where her mailing would not face a level of review that would uncover the concealed heroin, so the use of the special skill enhancement is properly applied.

“The defendant has no criminal history points in part because she has received diversion for two serious offenses,” the feds further noted. “The defendant misused prior leniency — a high-end guideline sentence of imprisonment will have a significant impact on this defendant.”

A defense sentencing memo asked for “a sentence of time-served with supervised release” or, in the alternative, a sentence of “either 10 to 16 months or 12 to 18 months” depending on how the court resolved a few other factors.

The defense said Colby was a single mother who had herself been abandoned at a young age:

Juliane Colby was born and abandoned in South Korea in 1977. She lived in an orphanage for the first two years of her life. Although the details of this early period of her life are unknown to her, when she was adopted at 22 months old, she was malnourished to the point she wore a nine-month old’s clothing. And she was inexplicably afraid of men.

When she arrived in America with her adoptive parents, she required several years of adjustment. She suffered panic attacks for fear that she would be given back to the Korean orphanage. Then, at age 11, her father died unexpectedly at age 38 from a cardiac arrest pulmonary embolism.

“Ms. Colby desperately seeks approval from loved ones, always feeling as if she is not good enough to receive it,” the defense wrote.

COLBY:  “Question, have you only dated black girls?”

KENNEDY:  “Honestly yeah but I’ve been with all kind before. Wby ?”

COLBY:  “Just curious. So you have only dated black girls but messed around with girls of different ethnicities?”

COLBY:  “See, I’m old. I don’t know acronyms. Lol! I’ve been with white guys but since college I’ve just been with black guys. I tend to attract black guys.”

COLBY: “Not to brag but I will because I am that great!”

KENNEDY: “I’m most definitely up for a challenge , girls my age can’t handle me … I need a real woman!” [Two kiss emojis.]

COLBY: “Girls your age annoy the shit out of me. They are so ungodly immature. Lol”

COLBY: “Women hit their sexual peaks around late 30’s to 40s’ and guys hit their in their early 20’s so that is why you see older women with younger men.”

KENNEDY: “So your at your sexual peak, meaning this is a time in your life where you’re the most freakiest ?”

KENNEDY: “Freaky enough to give it to me in a jail visitation room ? Lol”

Further along in the conversation, Colby told Kennedy that she could “lose my job, my law license, and my social work license” if she got caught and that she “couldn’t take that risk.” 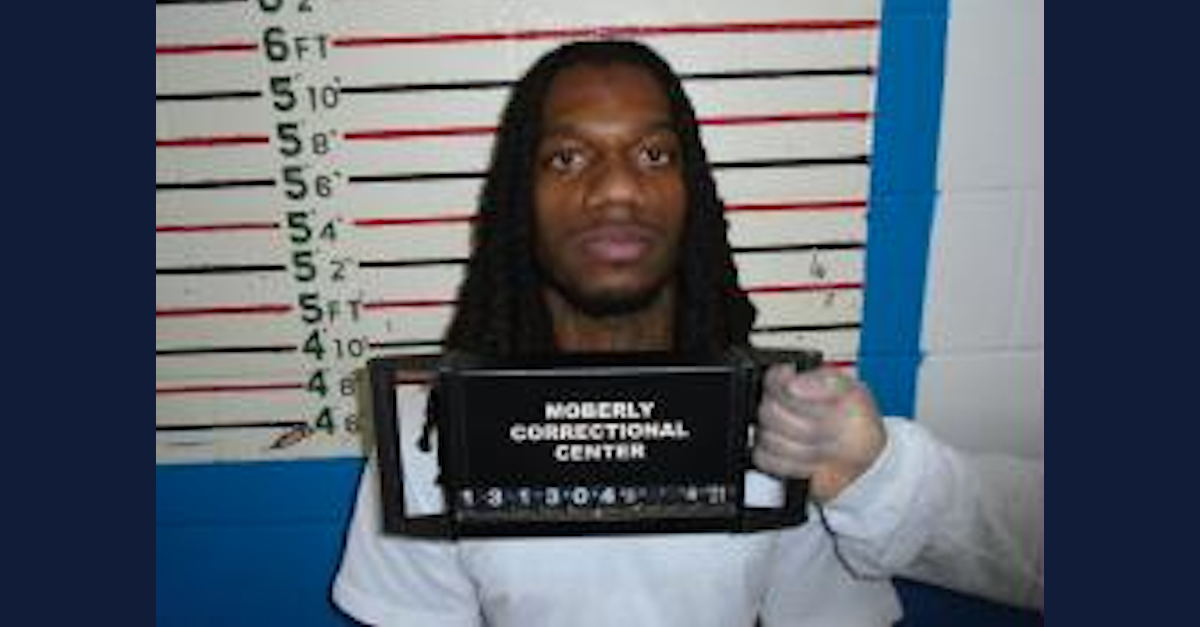 However, Colby later returned to describing herself as “freaky.”

“I”m ready for everything you’re ready for,” Kennedy replied.

“I don’t doubt your skills and willingness,” Colby said in return.

On April 10, 2017, the documents say a jail guard noticed Kennedy and person “described as his attorney” and who appeared to be Colby in visitation area.

Colby was believed to have “her shoe off rubbing Kennedy’s leg with her foot.”

Colby also asked to go into a room with Kennedy as he tried on clothes for court, the document asserts.

According to a Missouri Bar director, Colby was licensed to practice law on Dec. 2, 2014, in the Show-Me State. Her license remains in “good standing,” that directory indicates.  Her name does not appear to be contained in a list of Missouri attorney ethics cases over the last few years.

Additional contact between the two is described in the state court documents below. The federal documents relevant to Colby’s recent guilty plea and sentence are also embedded below.