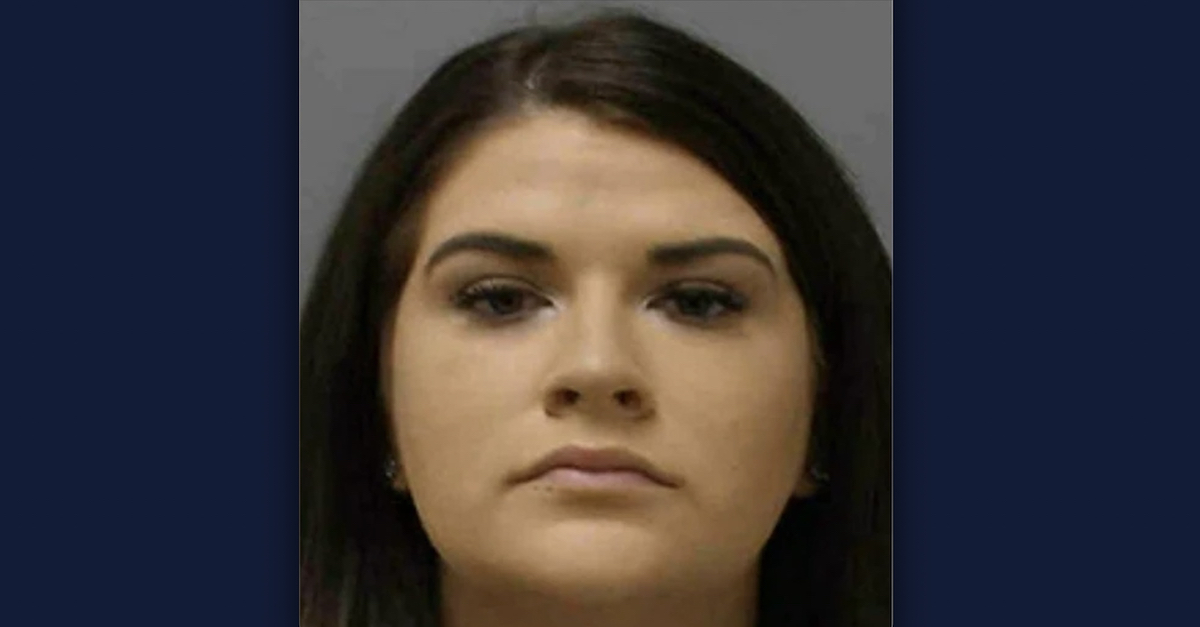 Kayla Mae Bergom via the Iowa Division of Criminal Investigation.

A former jail employee in Iowa was arrested and charged with multiple crimes for allegedly having a sexual relationship with an inmate that lasted for several months.

Kayla Mae Bergom was taken into custody in April and charged with three counts of sexual misconduct with an offender, an aggravated misdemeanor, court records reviewed by Law&Crime show.

The 27-year-old Bergom, of Belle Plaine, is accused of having a sexual relationship with a 29-year-old inmate at the Tama County Jail while she was still employed at the facility, according to a report from Cedar Rapids ABC affiliate KCRG-TV. The sexual relationship reportedly took place between September 2020 and April 2021. Court documents obtained by the station reportedly say that Bergom and the inmate, whose name was not released by authorities, had sex “on multiple occassions,” at least once “in a utility closet” and at least twice “in the recreation yard area of the jail,” as the report put it.

An employee with Tama County reportedly provided a tip to the Iowa Division of Criminal Investigation accusing Bergom of sexual misconduct. The Criminal Division opened an investigation into the matter which reportedly concluded in March. Weeks later, on April 20, Bergom was taken into custody by deputies with the Tama County Sheriff’s Department executing a warrant for her arrest. She was reportedly released later that day after posting bond.

Tama County Sheriff Dennis Kucera reportedly told The Gazette that Bergom immediately resigned after being charged with the crimes. She had reportedly been employed at the jail for three years prior to her resignation.

Bergom in May entered a plea of not guilty to all three counts of sexual misconduct. If convicted, she faces a maximum of six years in a state prison.

The Iowa Division of Criminal Investigation and the Iowa Attorney General’s Office did not respond to messages from Law&Crime seeking additional information in the case against Bergom.

Bergom is far from the only jailer to be accused of having a sexual relationship with an inmate.

A former Federal Bureau of Prisons correctional officer and drug treatment counselor last week was sentenced to serve 80 months — or about six and a half years — behind bars after pleading guilty to a list of sexual abuse charges involving four different female inmates.

Federal court documents say the defendant plied the inmates with “cigarettes, alcohol, suboxone, and other contraband” — including “items as seemingly innocent as Kool-aid” — to “entice them to engage in or conceal his sexual abuse.” He also used “force and threat” to commit some of his many offenses, prosecutors added in a sentencing memorandum.

The ex-correctional officer even tried “to conceal his crimes” by “having bottled water on hand for his victims to ensure they swallowed his semen after he ejaculated in their mouths in his office,” prosecutors told a judge.

In another case, a former prison sergeant in Minnesota, was sentenced in June 2021 to four months in jail — to be followed by seven years of probation — after he admitted to trading a McDonald’s meal in exchange for oral sex from a female prisoner he was transporting.

When the prisoner said she would “do anything” for McDonald’s, the sergeant reportedly responded by asking if that included “fooling around” with him. When she answered in the affirmative, he ordered food at a nearby McDonald’s drive-through and parked next to an abandoned building — where he uncuffed the inmate and had sex with her in the front of the transport van.