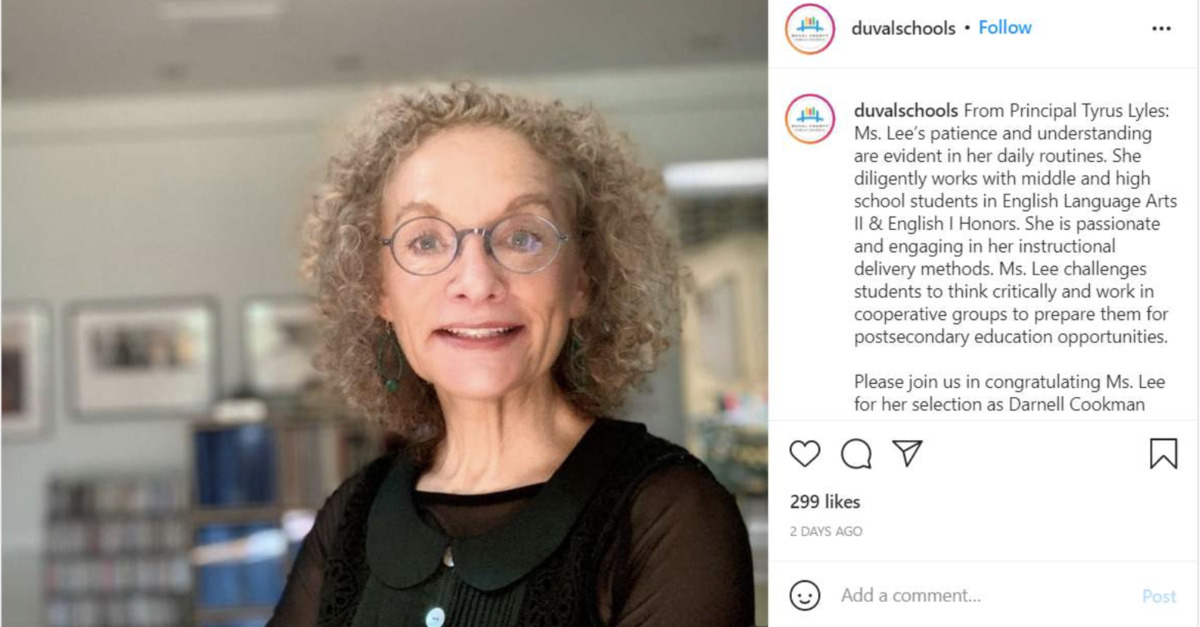 A Florida woman was recently named “Teacher of the Year” by the prestigious public school where she worked in Jacksonville. Days later, that same teacher was charged with child abuse.

Caroline Lee, 60, was arrested and charged on Friday for an incident that occurred at the Darnell-Cookman School of the Medical Arts, a magnet middle and high school with  accolades for educational achievement bestowed on it by both federal and national authorities.

Lee, then, would have been considered among the best and the brightest of American educators. But that all changed last week.

According to a police report obtained by local NBC affiliate WPTV, the celebrated teacher slapped a female student across the face, causing the girl’s nose to bleed and then repeatedly struck the child on the top of her head while calling her vulgar names. As the alleged attack continued, the girl said that she began to try and pin the teacher’s arms down–prompting a swift kick to one of the girl’s lower legs.

The student eventually fled the situation and relayed her experience to the school’s guidance counselor, police said in the report.

The incident is alleged to have stemmed from a laudatory Instagram post by the school announcing Lee winning this year’s superlative.

Ms. Lee’s patience and understanding are evident in her daily routines. She diligently works with middle and high school students in English Language Arts II & English I Honors. She is passionate and engaging in her instructional delivery methods. Ms. Lee challenges students to think critically and work in cooperative groups to prepare them for postsecondary education opportunities.

In comments on that post (which has since been removed), however, a student questioned whether the teacher had used the “n-word” during a class discussion. Lee replied that she had only used the word in the context of teaching John Steinbeck’s novella “Of Mice and Men.”

The student replied that it still wasn’t the right thing to do and Lee reportedly agreed, according to The Florida Times-Union.

“Cannot change the language of Steinbeck,” the teacher also wrote, via Instagram, in response to the student’s linguistic criticism. “Education is a powerful tool. It promotes tolerance and understanding. [Duval County Public Schools] decided that this was ok, not me. It is on the curriculum guide.”

Lee later called the student in for a meeting during home room period. The student did not have the teacher for any classes that year but eventually complied with the request, though she didn’t really want to go, according to independent, Jacksonville-based station WJXT.

After trying to elude the teacher by going to the restroom and finally sitting down in Lee’s classroom, the student told police, Lee asked the girl why she had threatened her online. The student said she didn’t.

The police report recounts what allegedly happened next.

Lee “reached across the table and struck her on her face with the heel of her palm,” police allege. The student, who is a minor and is not being named, “stated she grabbed her nose because it started bleeding after she was struck,” according to the report. The student allegedly added that “Lee then began repeatedly calling her a ‘fucking bitch’ as she landed several more strikes on the top of head.”

In an interview, Lee allegedly told police she had interpreted the student’s online comments as a threat against her life.

Hello Darnell-Cookman families. It is very disappointing, but I am compelled to share with you that one of our teachers was arrested today on campus for child abuse. Even more disappointing, the teacher arrested is our recent teacher of the year nominee.

This arrest stems from an incident that allegedly occurred today involving one of our students, and I have been in contact personally with that student’s family.

While our processes assume innocence, these allegations and the resulting arrest are obviously far below the standards and expectations we have for our school. We pride ourselves on providing all students with exceptional instruction preparing them for the best colleges and rewarding careers. This type of behavior is not tolerated here or anywhere in our district.

The teacher has been removed from the classroom and will not return, pending the judicial and internal procedures.

Lee appeared before a judge and was released on a personal recognizance bond Saturday morning. She was ordered not to have any contact with the alleged victim and to keep away from the school where she worked. She is likely to face a felony charge. Her next court date is Nov. 22.

“This allegation and the arrest are beyond disturbing,” Duval County Public Schools Superintendent Dr. Diana Greene said in a statement: “What is alleged should never occur—ever—especially in a school setting. I have no tolerance for adults who harm children, especially adults in a position of trust. We will cooperate with all investigations, and pending those results, we will take the actions necessary to stand up for and protect our students.”