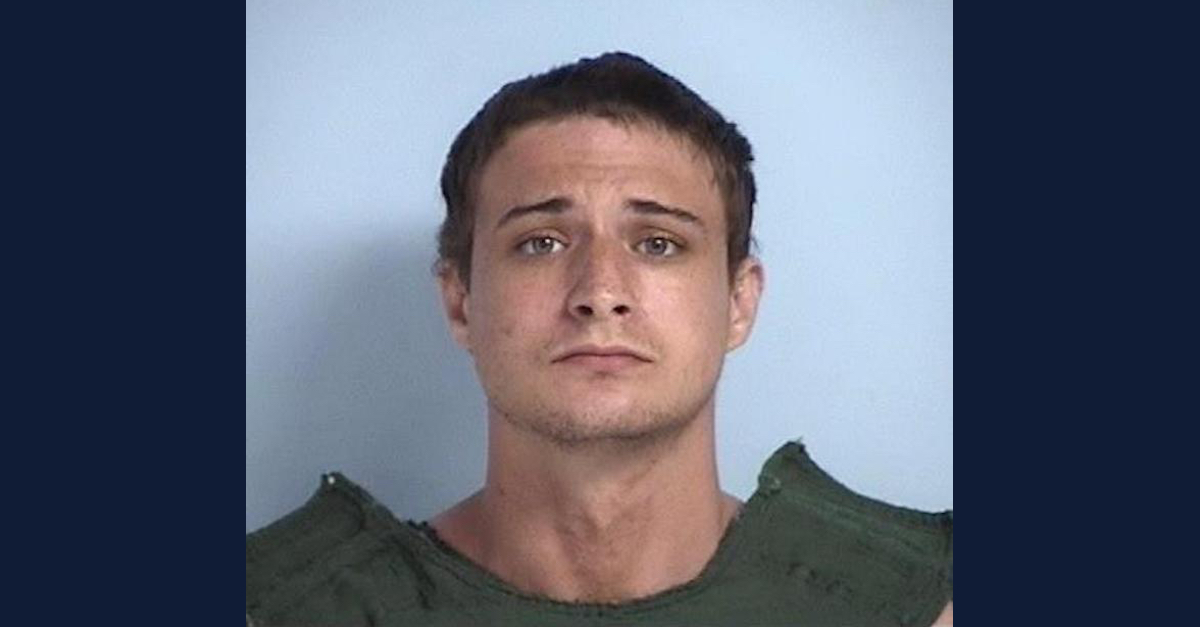 A Florida man was indicted on Tuesday for what authorities are terming a “brutal homicide” that occurred last summer.

Storm Royal Thayer, 25, stands accused of one count of murder in the first degree over the July 12, 2021 death of a woman who, to date, has yet to be publicly identified by law enforcement.

The defendant was originally charged with one count of murder in the second degree. Prosecutors, however, later sought and obtained the more serious charge, arguing that Thayer acted with premeditation.

The bloody incident left the unidentified victim dead in her own room–which also happened to be Thayer’s home because she was a roommate of the defendant and lived there with him and his father.

Walton County Sheriff Mike Adkinson, at the time, said his office received a 911 call from the residence during the mid-morning hours of the day in question. In that 911 call, the woman was described as “gravely injured.”

The woman was dead by the time deputies arrived.

According to an arrest report obtained by Northwest Florida Daily News, the victim had been stabbed 109 times and was found dead inside the garage by the defendant’s father–who dialed 911.

In that report, deputies described finding “numerous wounds to her neck and back.” The medical examiner’s office later determined what authorities said were the precise number of stab wounds.

According to an affidavit, Thayer removed his blood-speckled clothes and disabled security cameras before altering anyone to the victim’s status. The defendant’s father provided investigators access to the home’s security system. On that footage, authorities say, they found evidence of a woman screaming just before the video went dark.

The defendant allegedly had blood under one fingernail when deputies arrived. Aside from the site of the deceased woman’s body, a large amount of blood was also found in the living room, according to law enforcement. Deputies later recovered some of the defendant’s clothes, they said, where multiple small crimson dots were found.

The Walton County Sheriff’s Office quickly tied the alleged murder to Thayer’s extensive criminal history and their previous encounters with him.

“This is the result of a long list of things he’s done in the past,” WCSO Public Information Officer Corey Dobridnia said, calling the slaying “tragic.”

Thayer had been released from prison just months earlier after serving time for child abuse. In sum, he has been arrested and charged on six separate occasions for various infractions since early 2016, according to arrest records reviewed by Law&Crime.

The initial press release announcing him as the suspect in the murder made sure to include a reference to that history:

Thayer has a lengthy criminal history to include burglary, grand theft, aggravated battery, and child abuse. He was released from prison in March after serving time for the child abuse charges.

“Tuesday morning, when I heard the name of the suspect, the first thing I said, is I said this back in 2018,” Adkinson recalled the day after the woman’s death in comments to local ABC affiliate WMBB. “I literally said in 2018, that this individual was going to kill somebody.”

“Not surprised, sometimes high-risk lifestyles can lead to these types of outcomes,” the sheriff added.

Thayer is currently being detained in the Walton County Jail. A pretrial hearing has yet to scheduled in his case.