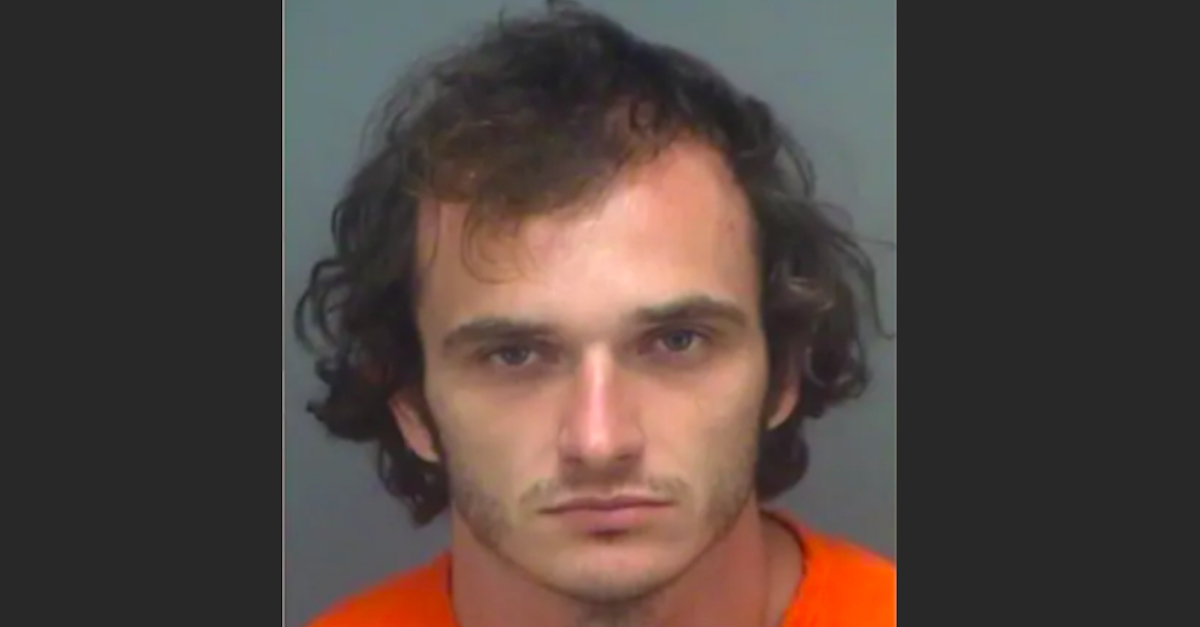 Law enforcement officials on the Gulf Coast of Florida on Tuesday said that a suspect wanted for violating a restraining order opened fire on two police officers and likely would have killed at least one of them if his gun had not jammed after he fired the first shot.

The Pinellas County Sheriff’s Department on Tuesday released dash cam video footage of the incident, which took place Saturday when Officers Ronald McKenzie and Pavel Kuznetsov arrived at the home of Austin Kingos. The officers were there because a judge issued a warrant for Kingos to be hauled into custody; the suspect allegedly violated a stalking injunction — a misdemeanor.

Speaking to reporters during a Tuesday morning news conference where the dash cam footage was first publicly released, Pinellas County Sheriff Bob Gualtieri explained how the situation quickly escalated. It resulted in at least one of the officers narrowly escaping with his life when a bullet came within inches of head. Gualtieri said both officers drove marked cars, were in full uniform, and their lights were fully activated.

McKenzie was the first officer on the scene. He observed Kingos returning to his home in a white van and proceeded to execute a traffic stop on the street in front of the house.

A struggle ensued, during which Kingos pulled a 40-caliber semi-automatic handgun from his waistband and pointed it at McKenzie. At the same time, Officer Kuznetsov had arrived and was approaching the vehicle from the rear towards the driver’s side door. That was when Kingos’s gun went off, sending a round in Kuznetsov’s direction.

“It literally whizzed by [Kuznetsov’s] head,” Gualtieri said. “He said he could hear the round whizz by his head. It was that close.” 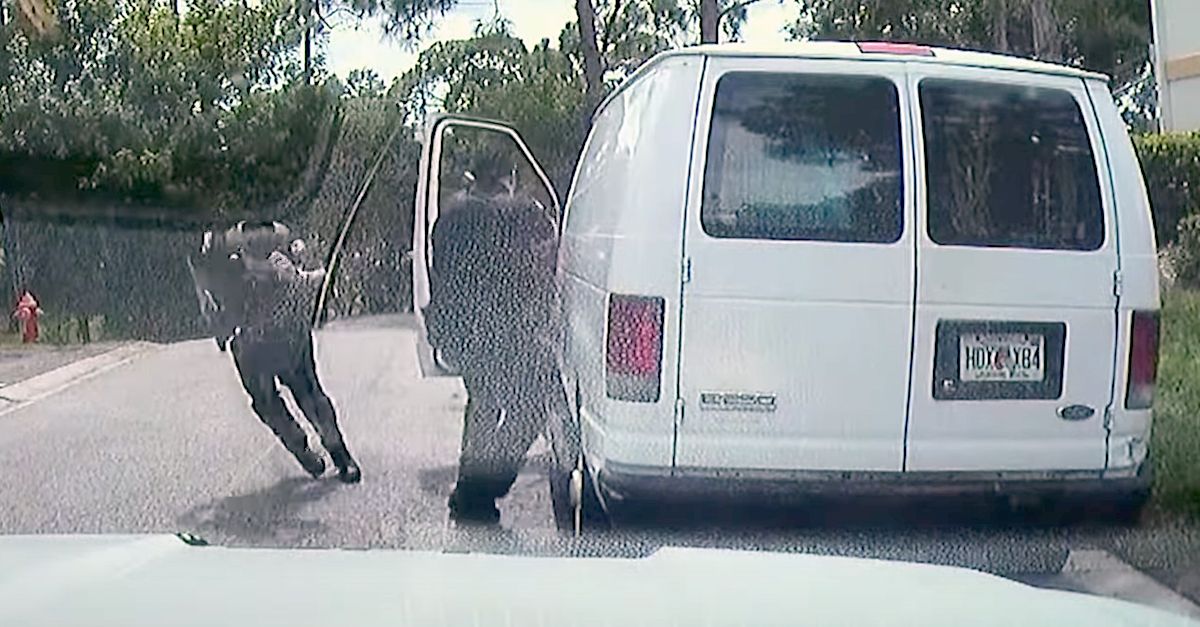 The bullet became lodged in the ground-level door of a building behind the officer.

“If Officer Kuznetsov’s head had been tilted slightly to the left, or he had taken one more step before he stopped, there’s no doubt that he would have been shot in the head,” Gualtieri said.

After the first shot was fired, Gualtieri said Kingos again pointed the gun at the officers and pulled the trigger.

“Kingos’s gun jammed or he would have fired additional rounds,” Gualtieri concluded. 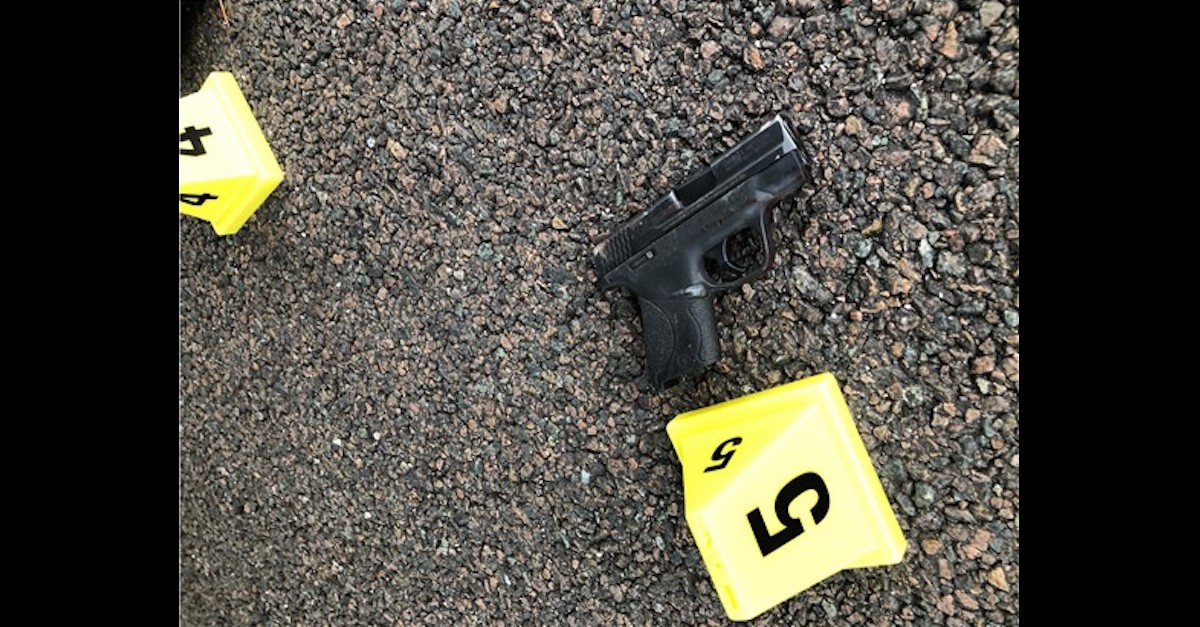 An evidence photo shows the gun authorities say Austin Kingos used while shooting toward an officer.

McKenzie then returned fire and struck Kingos in the leg. Kingos tried to flee the scene but quickly surrendered. The officers then provided him with first aid, including a tourniquet to stop his leg from bleeding. He was treated at a local hospital and released; he is currently being detained in the Pinellas County Jail.

Gualtieri also noted that Kingos was prescribed medications for numerous mental health issues including bipolar disorder and schizophrenia. But his family told authorities that he had recently stopped taking his medication and began using drugs again.

“This is a case where the intersection of guns, drugs, and a person with mental health issues led to a very bad result,” Gualtieri said. “We could have very well be talking about a line of duty death of an officer. I hope he gets treatment and I hope he gets to where he needs to be, but he almost killed two cops in this county and he needs to be held accountable.”

[all images image via the Pinellas County, Fla. Sheriff’s Office]