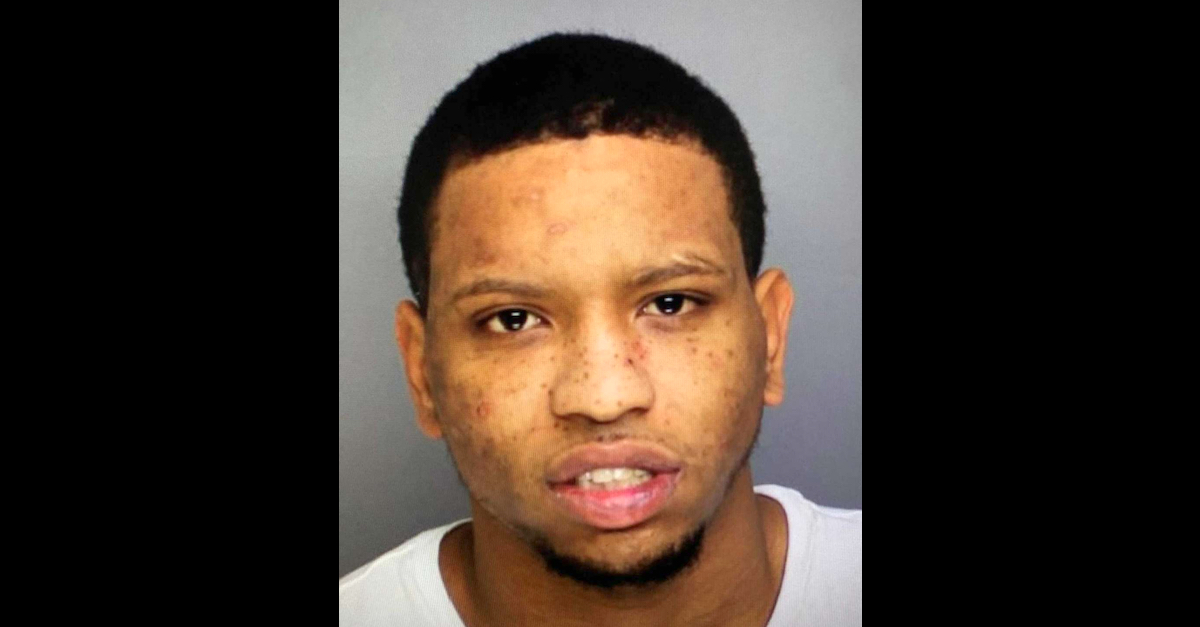 A Connecticut man on Friday admitted his role in what federal prosecutors say was a gang-related shooting outside a courthouse in Bridgeport in January 2020.

Destine Calderon, 26, pleaded guilty in federal court to what prosecutors called a “racketeering offense stemming from his participation in a Bridgeport gang” and his presence during the shooting.

New Haven, Conn. ABC affiliate WTNH-TV reported when the shooting occurred that some twenty rounds were fired into a vehicle outside the state superior courthouse on Golden Hill Street.  As Law&Crime previously noted, several of the people who were fired upon fled into the guarded courthouse for help. 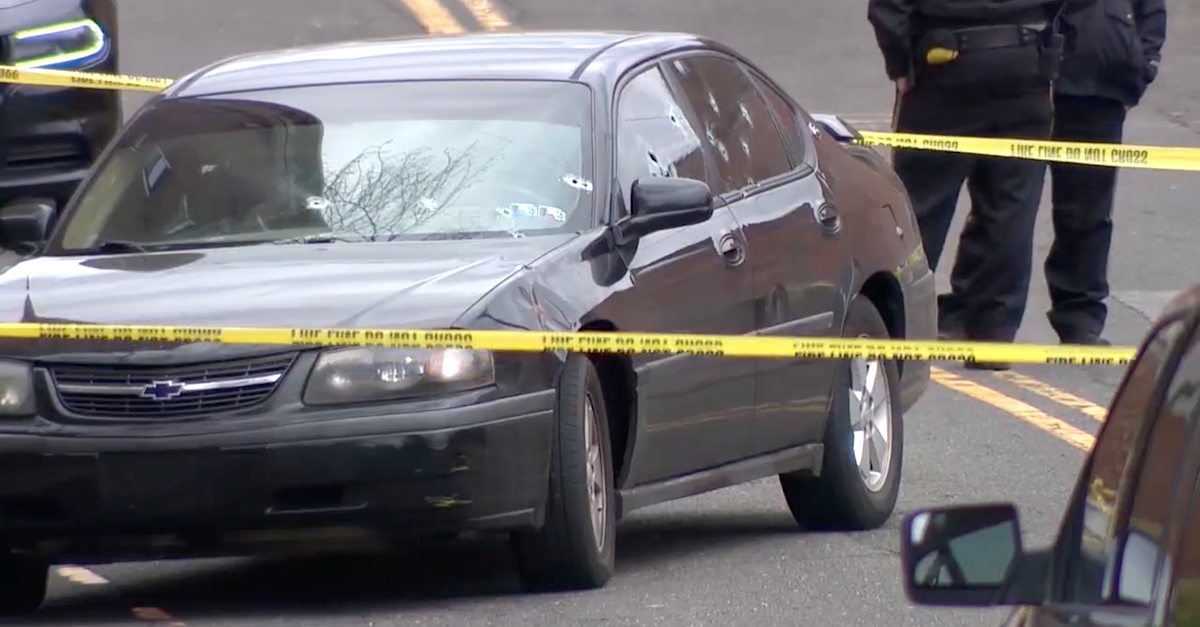 A car positioned in front of a state superior courthouse on Golden Hill Street in Bridgeport, Conn., was shot multiple times on Jan. 27, 2020. (Image via screengrab from WTNH-TV.)

Federal prosecutors explained in a press release that Calderon “admitted that he participated in gang-related drug trafficking” and “was aware of the planning and present in a vehicle” when gang members “attempted to kill members and associates of” a rival gang “in a brazen afternoon shooting in front of a Bridgeport courthouse on January 27, 2020.”

The police were alerted to the shooting when Shot Spotter — an electronic surveillance system — detected gunfire.

“Upon arrival, investigators discovered that four victims had been shot while sitting inside a black Chevrolet Impala,” the feds said in a press release. “One victim was shot in the side of his chest and was left paralyzed and a second victim sustained multiple gunshot wounds to his back, shoulder and wrist. The victims’ vehicle had approximately 23 entry bullet holes in the driver’s side and windshield area.”

The authorities said at the time that they believed the shooting was a form of retaliation for a previous shooting the weekend prior. 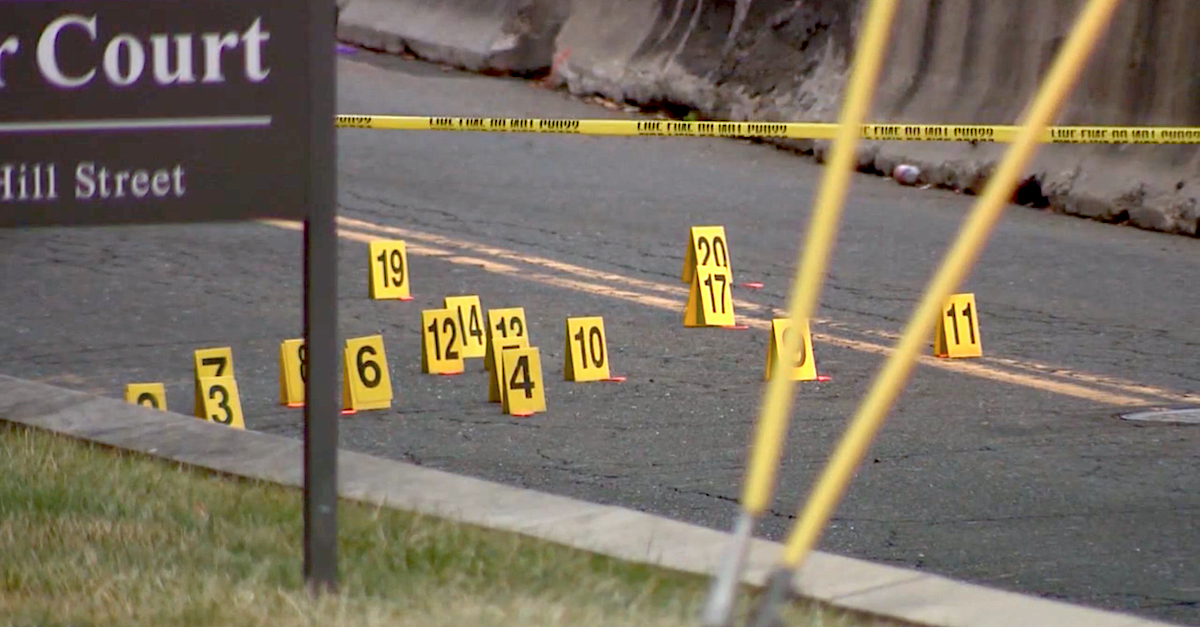 Evidence flags were positioned on Golden Hill Street in Bridgeport, Conn., in front of a state superior courthouse after several victims were shot multiple times on Jan. 27, 2020. (Image via screengrab from WTNH-TV.)

Federal prosecutors said Calderon “appear[ed] in YouTube videos and in social media posts promoting the gang” of which he was a member. They explained the various local gang connections at length:

Calderon has been a member of the “Greene Homes Boyz” (“GHB/Hotz”), a gang based in the Charles F. Greene Homes Housing Complex in Bridgeport’s North End, whose members and associates distributed heroin, crack cocaine, marijuana and Percocet pills; committed numerous acts of violence against rival gang members and other individuals, and celebrated their criminal conduct on social media websites such as Facebook and YouTube. GHB/Hotz members and associates also committed acts of intimidation and made threats to deter potential witnesses to their crimes and to protect gang members and associates from detection and prosecution by law enforcement authorities. Since approximately 2017, GHB/Hotz members have been aligned with members of the “Original North End” (“O.N.E.”), a gang based in the Trumbull Gardens area of Bridgeport, against rival groups in Bridgeport, including the East End, East Side and PT Barnum gangs, as well as 150, which is a geographic gang based on the West Side of Bridgeport.

“Calderon pleaded guilty to one count of conspiracy to engage in a pattern of racketeering activity, an offense that carries a maximum term of imprisonment of 20 years,” prosecutors said.  Sentencing is scheduled for Dec. 28.