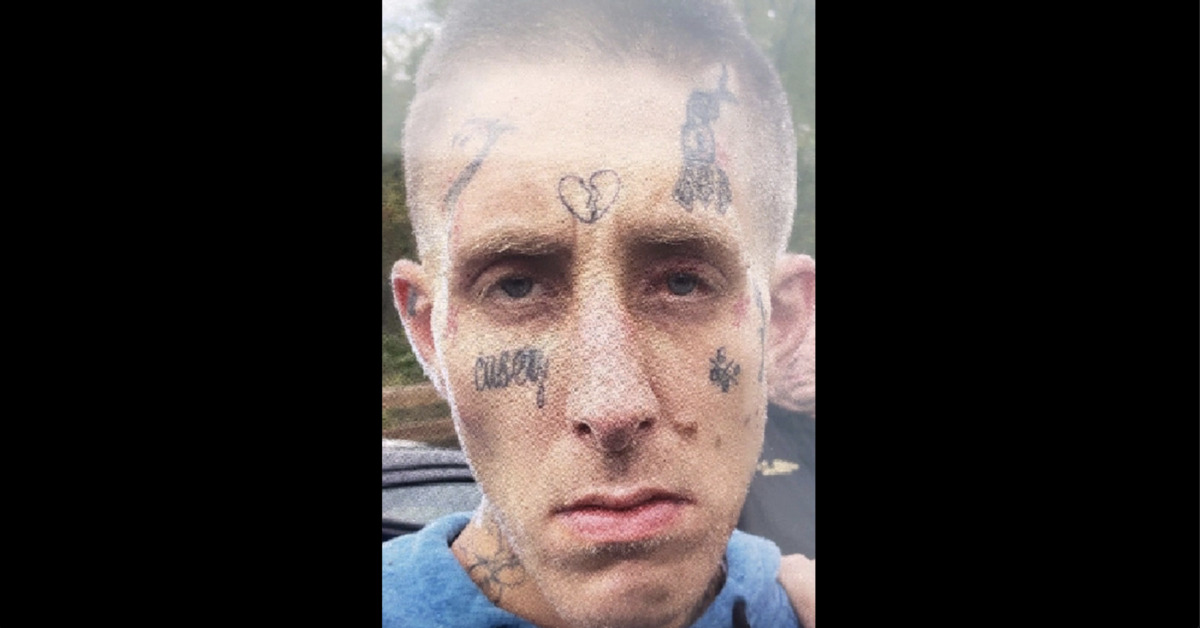 A heavily illustrated man was arrested in connection with a harrowing carjacking in Upstate New York earlier this week.

Jonathon Grico-Wolak, 30, stands accused of grand larceny, robbery and a veritable litany of crimes, according to Albany ABC affiliate WTEN.

Around 4:30 p.m. on September 29, the New York State Police received a call about an alleged carjacking in Canajoharie, N.Y., a small village midway between Albany and Utica and with a northern boundary marked by the Erie Canal.

According to the NYSP, law enforcement located the vehicle in question and briefly gave chase until the alleged carjacker managed to get stuck in a ditch before fleeing on foot and eventually being charged with two counts of menacing in the second degree.  He was also accused of one count each of reckless endangerment, criminal impersonation, and driving while ability impaired — and several additional vehicle and traffic-related violations on top of the aforementioned crimes.

“Once the suspect’s vehicle became disabled, he fled into the wooded area off of the canal trail,” the NYSP said in a press release on Thursday. “Troopers and a Montgomery County Sheriff’s Deputy observed the suspect walking along the canal trail [a local bike path] where he was taken into custody without incident.”

The incident, however, began just before the four o’clock hour when Grico-Wolak allegedly brandished a silver pistol in front of the Betty Beavers gas station in Canajoharie, ejecting the woman who owned the car and her two-year-old from the vehicle before fleeing, according to the Schenectady, N.Y.-based Daily Gazette.

Responding officers were initially told about a fight at the gas station but quickly learned the 24-year-old mother had been carjacked; the defendant allegedly pointed his gun at both her and her child and then stole the vehicle in a matter of moments, the newspaper reported.

“She was going to get out and he jumped into the driver’s seat, pointed what appeared to be a gun at her and the baby and said ‘get out,'” Canajoharie Police Chief Bryan MacFadden said on Thursday.

Grico-Wolak then allegedly led at least three different police agencies on a 30-odd-mile chase via the New York State Thruway before switching to an interstate highway where he was intercepted by state police and Montgomery County Sheriff’s Office units–including the sheriff himself, who was almost run off the road on Route 55.

“He came right toward me and forced me to take evasive action,” Montgomery County Sheriff Jeff Smith told the Gazette. “This was a dangerous individual who had just taken a vehicle at gunpoint. We didn’t know what he was capable of.”

The highly-sought car then spilled back onto the Thruway, tacking west before plunging into a ditch near Little Falls, N.Y. and the state canal trail. The suspect was ultimately ascertained and arrested on a bike trail in Herkimer County where he was attempting to flee on foot.

Grico-Wolak was initially arraigned in Canajoharie. He is currently being detained in the Montgomery County Jail on $100,000 cash or $200,000 bond, according to Finger Lakes One,

The Canajoharie woman and her son are reportedly doing fine and are currently aided by the help of their family, according to the Gazette.