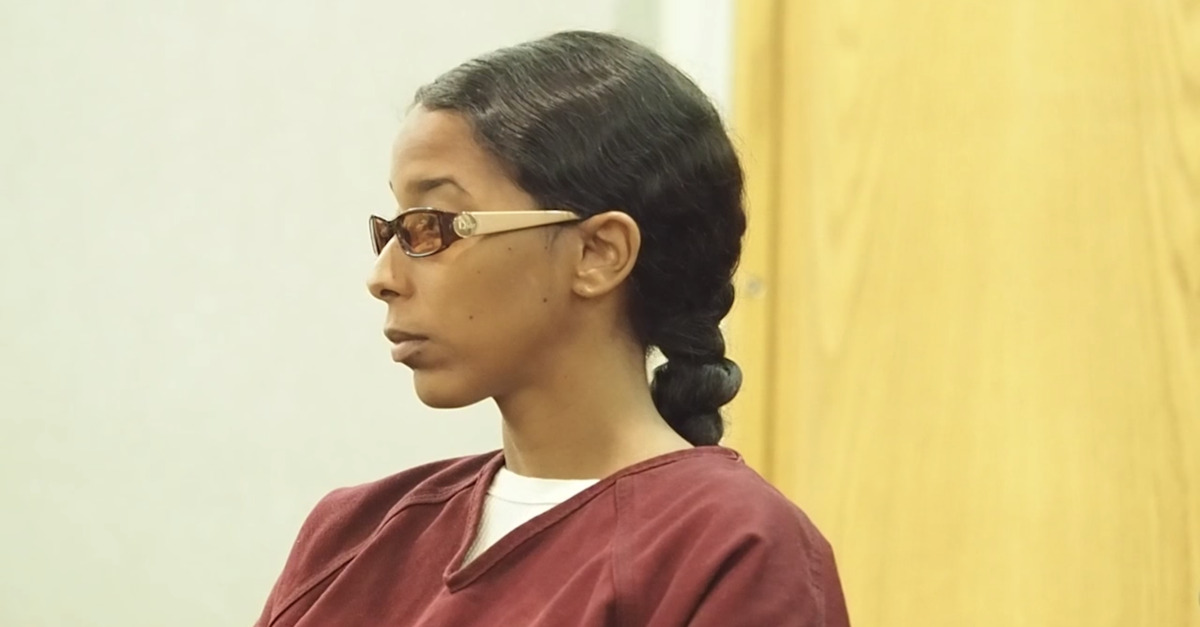 A New Jersey woman who murdered her ex-girlfriend on her second attempt was sentenced to nearly 100 years in state prison on Friday.

Jennifer Sweeney, 38, first arranged to have 41-year-old mother Tyrita Julius killed in 2015. In November of that year, just two days before Thanksgiving, Julius was shot eight times while she was driving her car by Andre Harris, 38. Police on the scene found that the victim had subsequently crashed into a utility pole. Still she survived.

But not for long.

Using the fact of her ex-lover’s convalescence as a way to work her way back into her life, Sweeney got close to her victim once more and strangled her to death with an electrical cord in March 2016.

After that, Sweeney and Harris buried the victim’s body at Harris’s house.

Sweeney would later join friends and relatives in a months-long search for the victim’s body.

“It is difficult to imagine a more heinous scheme of manipulation and cold-hearted depravity over four months than that orchestrated by Jennifer Sweeney,’’ Superior Court Judge David F. Bauman said, according to a report by the Asbury Park Press.

Sweeney convinced Harris, a friend from high school, to shoot Julius because she believed she was cheating on her, according to testimony from the gunman during the defendant’s trial last year. Harris told jurors he only agreed to the attempt on the life of the woman–whom he said he didn’t even know–because Sweeney had threatened to kill his children if he didn’t help her exact the jealous revenge plot.

“The threats that were made to him, he truly believed,’’ Harris’ attorney, Allison Friedman, told the court, the Jersey Shore-area newspaper reported. “Those threats involved causing harm to his son, and that scared him, it scared him to his core, because he believed that they would be real, that they would be carried out, and he loved his family and he wanted to protect his son.’’

For his testimony against Sweeney, the shooter was given a relatively lenient deal on myriad charges to which he pleaded guilty in 2019, including two counts of attempted murder, conspiracy to commit murder, possession of a weapon for an unlawful purpose, desecrating human remains and tampering with evidence, as well as one charge of obtaining a controlled dangerous substance by fraud. The final drug charge was unrelated to the Sweeney-Julius murder case.

“I’m so sorry for what I’ve done,” Harris said to relatives and friends of Julius during his own sentencing proceedings on Friday. “I don’t know what to say. I’m asking for you to forgive me.”

In the end, Harris received 16 years in prison for his various roles in the murder, coverup, and desecration of Julius’s remains.

Sweeney was sentenced to 20 years in prison for attempted murder and a life term of 75 years for the murder of Tyrita Julius. Judge Bauman determined that both sentences will run consecutively. She was convicted of the crimes last September.

Under the terms of Garden State law, a defendant convicted of a crime including violence must serve at least 85% of their prison term before they are eligible to be considered for parole. In Sweeney’s case, that means she must spend a minimum of over 80 years behind bars.

The victim’s mother, Queen Julius, cried during Sweeney’s sentencing, according to a report by Manhattan-based ABC flagship station WABC.

“I will forever be heartbroken,” she said. “She was my child, my only daughter.”

“This sentencing is a fitting outcome to the prosecution of genuinely monstrous crimes,” Acting Monmouth County Prosecutor Lori Linskey said in a statement. “This defendant’s actions were callous, calculated, and vicious, and ended the life of a woman beloved by her family and friends. I sincerely thank the detectives and assistant prosecutors who worked so diligently over so many years to see that justice was done in this case.”