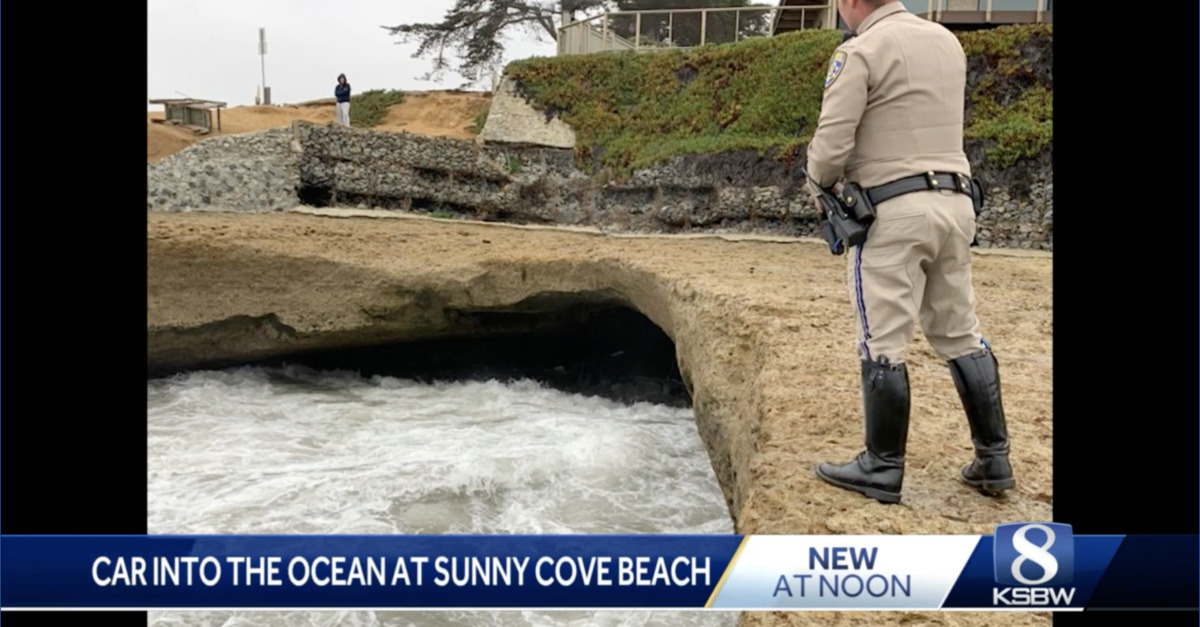 A mother of two has been charged with attempted murder over a shocking car crash late last week in California.

The incident occurred on Friday morning at the intersection of Sunny Cove Drive and East Cliff Drive in Twin Lakes, Calif. That intersection is situated on the northern portion of Monterey Bay in Santa Cruz County. Barreling through the guardrails alongside the cliff and the ocean’s expanse below, the dark-colored Nissan plunged directly into Monterey Bay. And law enforcement officials were suspicious about the circumstances of that crash from the start.

“Right now, we are investigating whether this was accidental,” Santa Cruz County Sheriff’s Office spokesperson Ashleey Keen told local NBC/ABC affiliate KSBW. “If it was intentional. There were a lot of witnesses in the area and we’re looking for any surveillance footage that could lead us to those answers.”

The black sedan also hit a bench on the way down and no other vehicles were involved, according to law enforcement.

The mother suffered numerous injuries and was first taken to a nearby hospital before being airlifted to a trauma center in another county. Her two children reportedly suffered only minor injuries.

According to the Santa Cruz Sentinel, surfers helped rescue the family of three after the black sedan got stuck in a nearby cave inlet.

UPDATE: The driver and two juvenile passengers were brought to shore with the help of a surfer.

We are investigating the circumstances surrounding the crash. All expected to be okay.

Thank you to the surfer who heroically helped save the occupants.🙌

“She was pretty banged up and in shock,” surfer Joe Evans said in comments reported by KSBW and Santa Cruz weekly Good Times. “I think she was pretty roughed up. I ran over there. There was another surfer out in the water. We both got there about the same time. Everyone was still in the car. The surfer helped them get out. He used his surfboard as a backboard. We got them on the beach and got them stable.”

The driver of the car has yet to be named but she was charged with attempted murder and child endangerment late Monday morning:

An update on driver who crashed thru guard-rail& ended up in the Monterey Bay Fri.#SCSO have charged the mother with attempted murder & child endangerment. Her kids received minor injuries She was flown to a trauma center. Car remains wedged 30-40 feet wedged in cave. pic.twitter.com/jsGZWpfBUY

Pieces of the car were washing up on the shore of Sunny Cove Beach for hours after the incident. The majority of the car, however, is still stuck in that aforementioned cave.

“It’s in a really difficult location,” Santa Cruz Harbor Master Blake Anderson told KSBW. “Typically, you would use airbags. The same type of airbags when a vessel sinks in the harbor just to be able to get that vehicle, in this case up and floating.”

The car likely won’t be towed until sometime in October due to current weather conditions.