Bloodied and Bandaged Man Charged with Murdering One Cop, Wounding Another in West Virginia Shootout 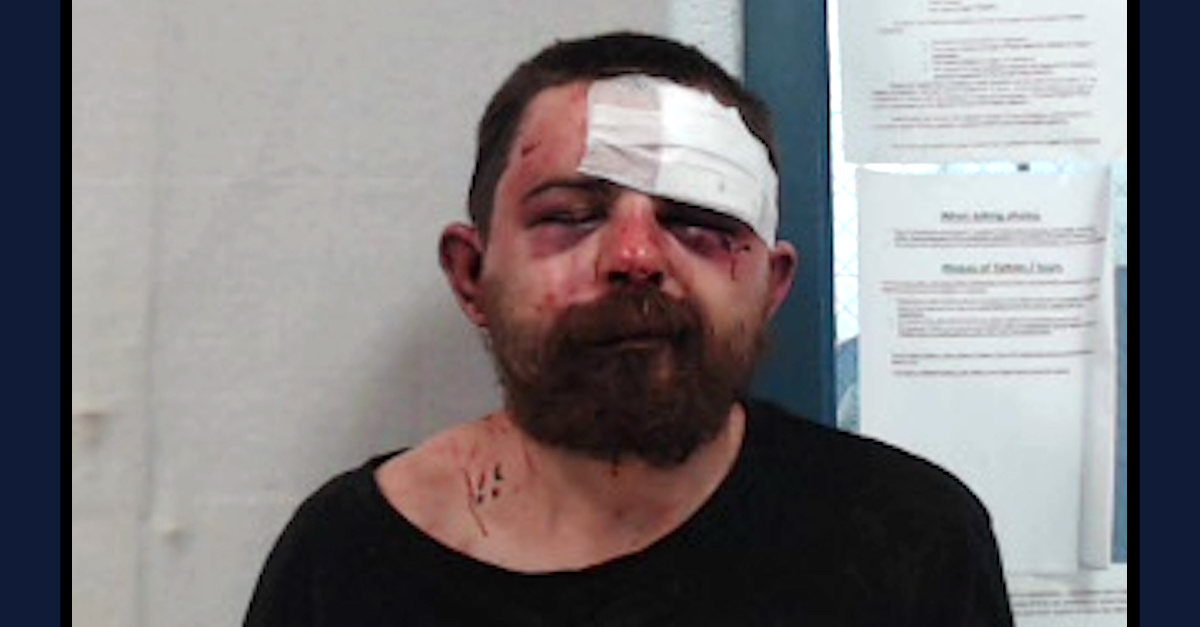 A man seen bloodied and with a bandage on his head in a West Virginia mugshot is accused of murder after a shootout left one sheriff’s deputy dead and another law enforcement officer wounded on Friday evening.

Brent Tyler Kelly, 28, is being held without bail at the Central Regional Jail in Flatwoods, Braxton County. The 5’3″, 140-pound defendant was booked into custody at 3:30 a.m., according to jail records. He’s listed as a “pretrial felon” under Nicholas County Case 22-M34F-00107. Nicholas County jail records, which are separate from the regional jail records, say Kelly is charged with first-degree murder.

The Nicholas County Sheriff’s Department wrote that the deadly events unfolded when deputies responded to a report of a “domestic disturbance in the Birch River area” at around 5:00 p.m. on Friday. There, in a camper, responding officers found Kelly and an alleged accomplice named Ritchie Holcomb. (Holcomb’s birthdate was initially given as “12/77/85,” which, of course, must be an error of some sort.) 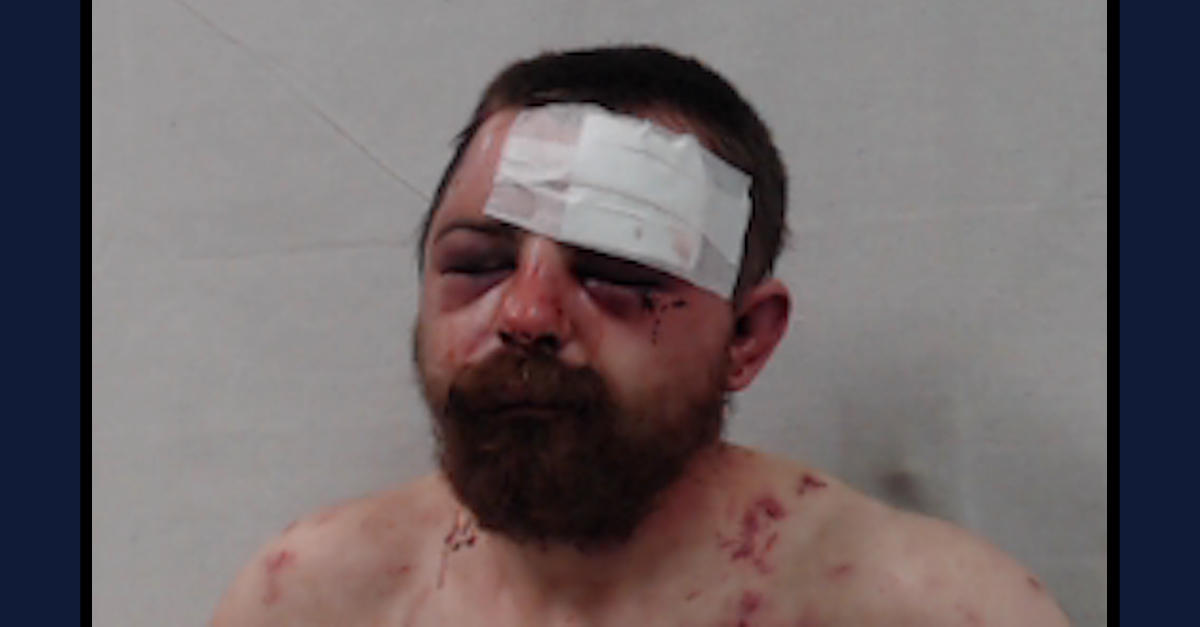 The scene was in the vicinity of U.S. 19, according to Huntington, West Virginia CBS affiliate WOWK.

“The two came out of the camper talking with deputies,” but “at some point the suspects became agitated running back into the camper,” Sheriff William F. Nunley wrote on Facebook.

“Deputies perused [sic] them into the camper discharging a taser,” Nunley said. 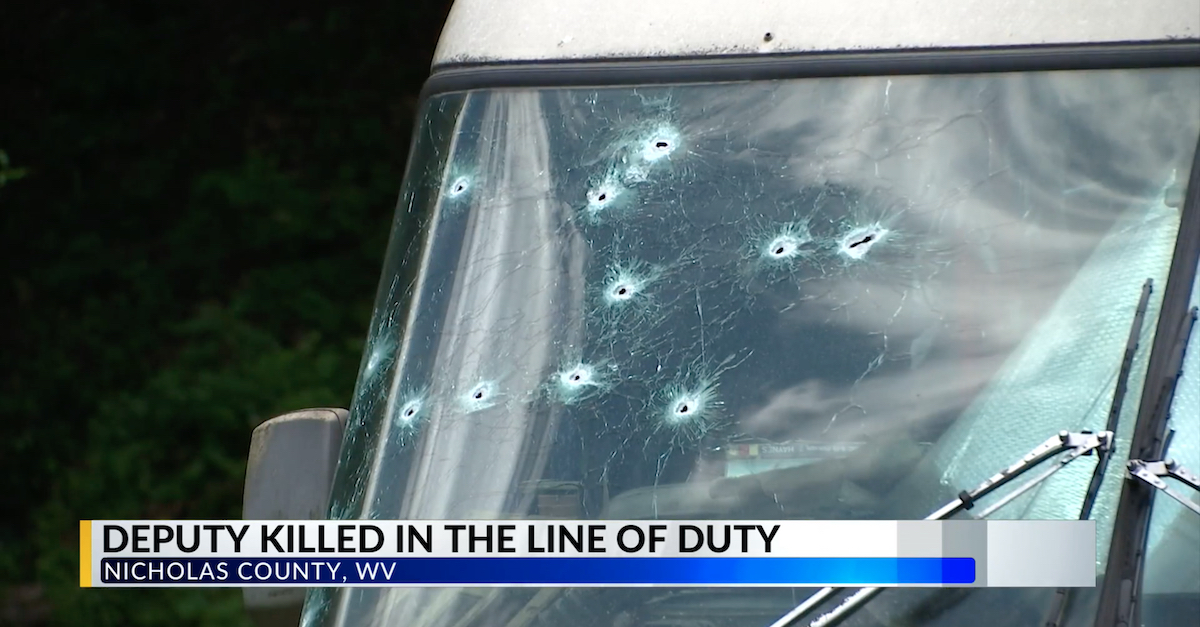 A camper in Birch River, W. Va., contained more than two dozen bullet holes after a shootout left one sheriff’s deputy and one suspect dead. (Screengrab via WTRF-TV.)

Then the suspects “began firing” at the responding officers, Nunley continued. The officers, per the department, “backed out of the camper.” But the shooting allegedly did not stop. 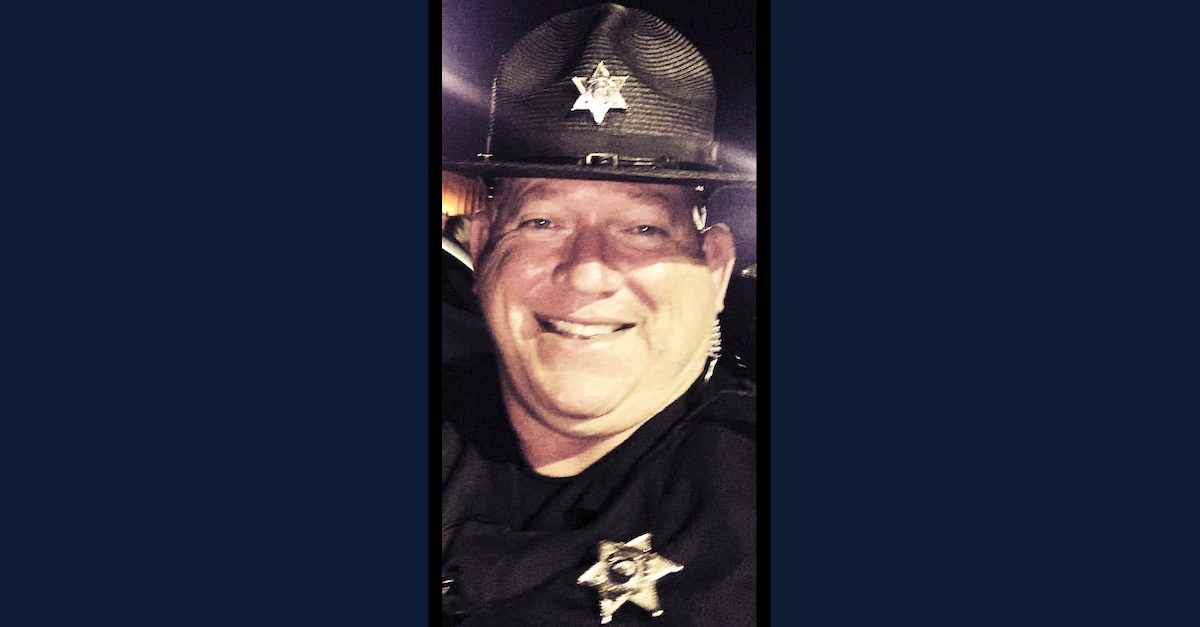 Holcomb was also killed in the mayhem, but “Kelly was taken into custody after a short standoff and physical altercation,” the department said. 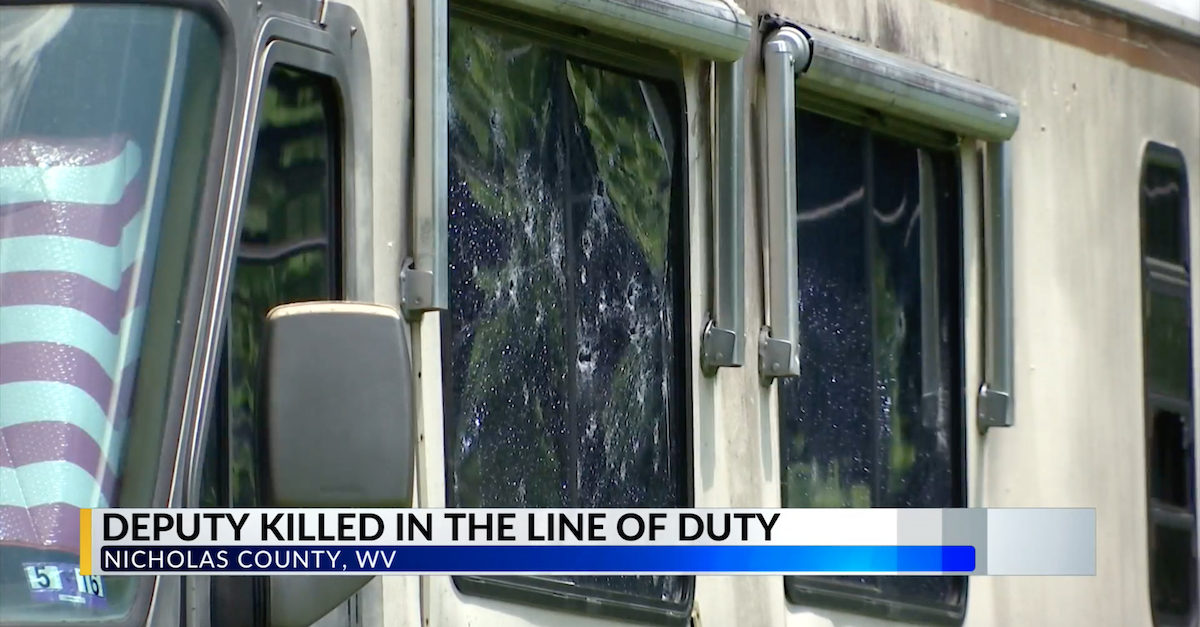 Huntington NBC affiliate WSAZ said more than a hundred officers raced to the scene of the shootings — some from faraway departments — and that a “heavy police presence” was visible outside CAMC General Hospital in Charleston where one of the officers, presumably Baker, was scheduled to be flown.  However, that flight for Baker was cancelled, according to reports from WSAZ’s Shannon Litton outside the hospital. Litton also said that the flow of information out of the scene itself was stymied by poor cell phone service. 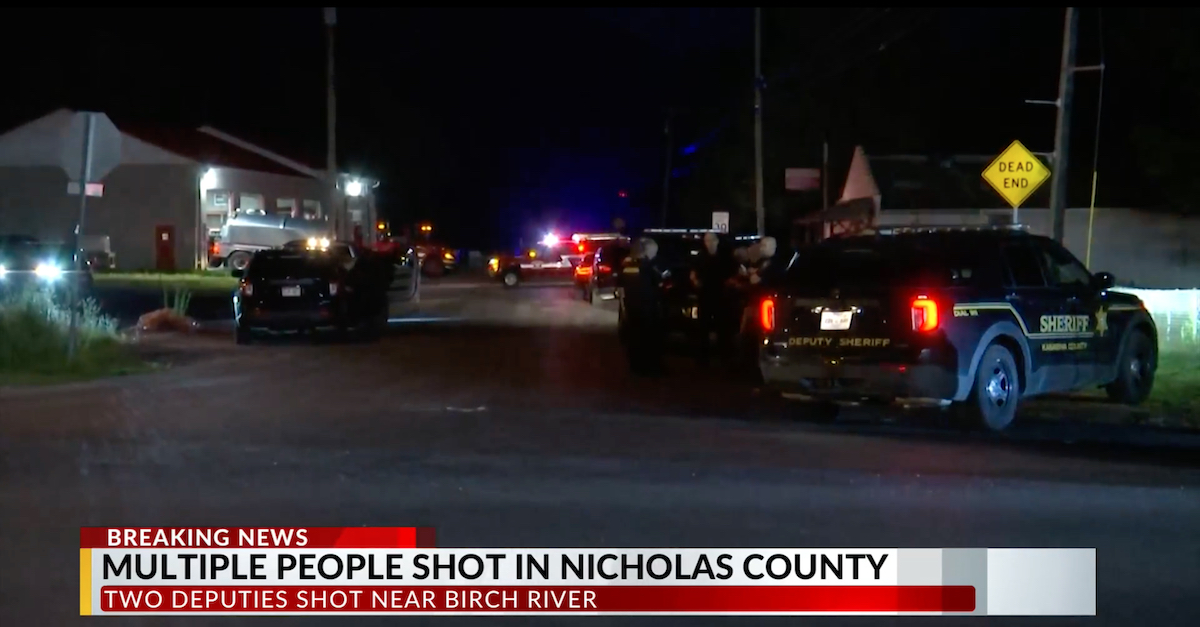 The scene near U.S. 19 in Birch River, Nicholas County, W. Va., after Deputy Tom Baker was fatally wounded nearby. (Screengrab via WOWK-TV.)

WOWK reported that both of the officers were taken to a WVU regional medical center in Summersville.  Some of the law enforcement response to the scene, the television station said, was a show of support:  the Nicholas County Sheriff’s Office lost another officer in an off-duty accident just last month.

Nicholas County is home to about 24,300 people.

Citing local news reports, West Virginia Senate Minority Leader Stephen Baldwin (D-Greenbrier 10) said on Facebook that he was under the impression that “the incident began as the deputies were serving a warrant.”  Then, “a heavy shootout ensued.”

“Let’s surround them in love,” Baldwin said of the victims and the community.

Other condolences immediately poured in.

To say that we are devastated is an understatement.

Please keep the family of deputy Baker in your thoughts and prayers along with out [sic] brothers and sisters in law enforcement and our entire first responder family.

Deputy Baker was killed in the line of duty last night. Another deputy was injured in the incident as well. Please pray for his peace and comfort as he lost a brother last night.

Our community mourns, once again, as we’ve lost another that we love.

Thank you, friends & followers for your thoughts and prayers during this time of tragedy.

Robert Shafer, the mayor of Summersville in Nicholas County, wrote as follows:

It’s with heavy hearts that we find ourselves praying for the Nicholas County law enforcement community. Last nights tragic event that took the life of Deputy Tom Baker and injured another deputy was a senseless act of violence. Too often we take for granted the sacrifices our men and women in uniform make to protect and serve their community. Our prayers are with Deputy Baker’s family and friends as well as the injured Deputy.

Cathy and I ask all West Virginians to keep Nicholas County in your prayers right now. Tragically, a Nicholas County Deputy was shot and killed when responding to an incident earlier tonight. Another Deputy is in critical condition. Both Deputies were airlifted to the hospital. The scene is now secure.

Our First Responders are heroes, they run to the fire to keep us safe and we should never forget their sacrifice. Especially in moments like these, all of us should realize the obvious — just how needed our law enforcement heroes are. We should have this exact same thought every day because all of us depend on and need these heroes every moment of every day.

U.S. Attorney Will Thompson, of the Southern District of West Virginia, wrote as well:

Yesterday evening, two officers with the Nicholas County Sheriff’s Department put themselves in harm’s way in the performance of their duties. Deputy Tom Baker and Corporal J. Ellison were shot while responding to a domestic disturbance. Deputy Baker succumbed to his injuries. I am grateful to learn that Corporal Ellison was treated for his injuries and released. This tragedy is a stark reminder of the sacrifices made by our law enforcement officers in the line of duty for the safety and protection of others. We mourn with Deputy Baker’s loved ones, our fellow law enforcement partners, the Nicholas County community and all of West Virginia. We are resolved that Deputy Baker’s service and selfless dedication will be forever remembered.

His daughter posted a posthumous message of love on Saturday in honor of her “sweet, ornery daddy.”