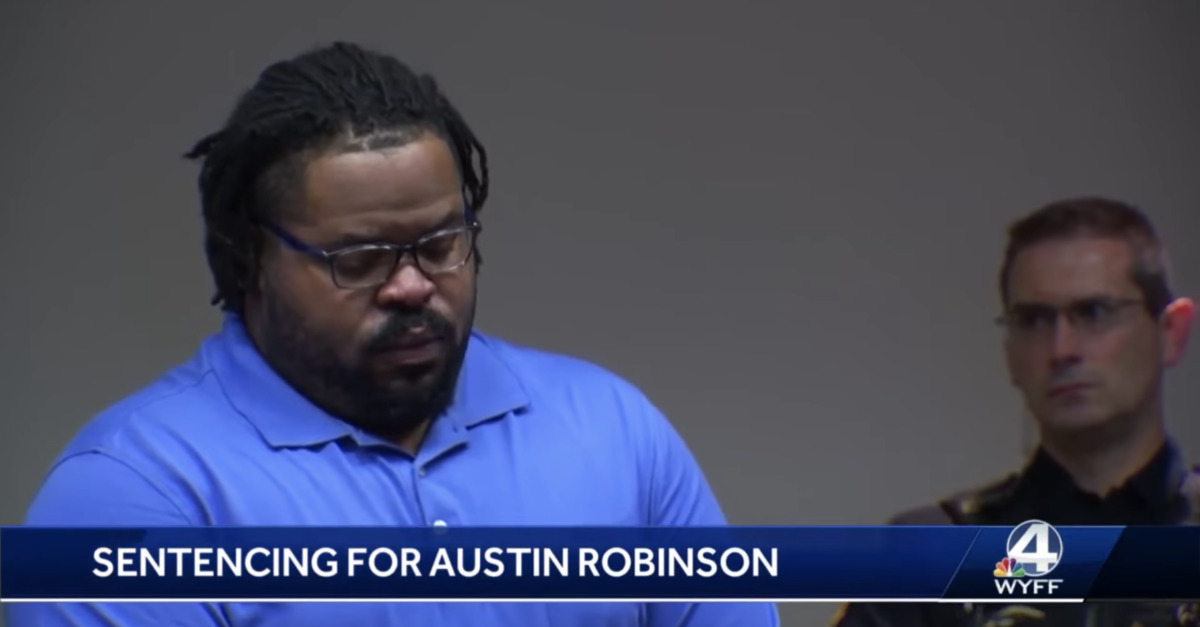 A South Carolina man who pleaded guilty to child abuse resulting in the death of his 3-year-old foster daughter was sentenced to 20 years in prison earlier this week.

Jerry Austin Robinson, 35, previously accepted legal culpability over the January 2021 death of Victoria Rose Smith. In April of this year, he pleaded guilty to homicide by child abuse/aiding and abetting.

Robinson has long maintained that he never personally abused the toddler but that he knew his wife, Ariel Robinson, 29, regularly beat her with belts and paddles and that he did nothing to stop the abuse.

“I told her she had gone too far this time, I should have stopped it,” the defendant told the court during his wife’s trial in May of this year, according to Spartanburg, S.C. CBS affiliate WSPA.

On Jan. 14 2021, Jerry Robinson called 911 roughly 15 minutes after 2:00 p.m. to report the worst. The long and short of that call was shared in court during his plea hearing by Assistant Solicitor Christy Sustakovitch, according to a report by Greenville News.

“We have an emergency, our daughter is unresponsive,” the prosecutor said, reciting the defendant’s words to 911 dispatchers. “She drank a lot of water. We tried to do CPR to get it out.”

In testimony against the wife, the husband claimed the wife would get upset at the girl if she ate too slowly or used the bathroom for too long.

On the day Victoria Robinson died, he said, Ariel Robinson abused the victim for roughly an hour before he came inside. There he told jurors that he found his wife standing over the child, saying: “You’re not done. You don’t get to tell me when you’re done.”

After that, Jerry Robinson said, he gave his foster daughter Tylenol but she got sick and eventually went limp.

“She told me she loved me and I said I love you too, I said I promised this wouldn’t happen again,” he said.

And it didn’t. She died soon thereafter.

“You would agree because you saw the pictures that Victoria was beaten to the pulp,” Sustakovitch asked the woman who meted out the abuse during her trial when she took the stand in her own defense, WSPA reported. To which she replied: “I would agree with that.”

Jurors in Ariel Robinson’s case deliberated for less than two hours before finding her guilty of homicide by child abuse.

She was sentenced to life in prison.

The case originally attracted national attention because Ariel Robinson was a contestant on a Food Network game show.

On the day the girl died, her foster father blamed the child’s visible bruising on her 7-year-old brother. He would later recant and say that he lied to investigators in order to “protect both sides.”

During his own sentencing, Jerry Robinson reportedly cried. He apologized to the deceased child’s family. He also invoked his biological children, whom he shares with Ariel Robinson, in a bid for a lighter sentence.

“To Tori’s family, I am truly sorry for all of this,” he said. “I hope that one day you all can forgive me.”

[H]e was able to see [his children] during visitations in-person in November twice a month. Robinson said his children had gotten used to see him. He asked the judge to consider his children with her decision and leave him on house arrest. Robinson pleaded guilty, which meant he could not be given only house arrest and would be sentenced.

“They don’t deserve to have both of their parents behind bars,” Jerry Robinson implored the court.

“You didn’t go to stop it,” she said. “You said, ‘She’s gone too far this time.’ That means there have been other times. You didn’t call, you tried . . . half measures that wouldn’t get you or your wife in any trouble. You went to CVS on your own. You could’ve done something then.”

The defendant was granted a 505-day credit for time served.