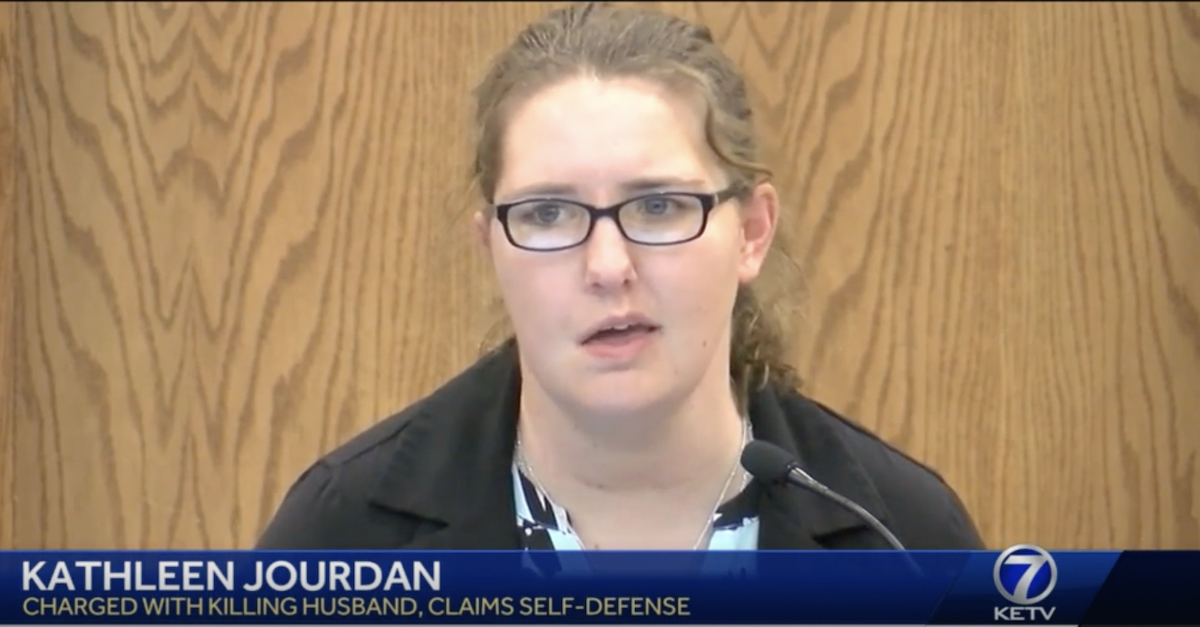 Kathleen Jourdan testifying during her murder trial. (via KETV)

A Nebraska doctor who shot her husband to death in front of their two children on a transcontinental freeway will not serve any time in prison after jurors found that she acted in self-defense.

A Dawson County jury found 33-year-old Kathleen Jourdan not guilty on one count of second-degree murder and one count of using a deadly weapon to commit a felony in the death of 35-year-old Joshua Jourdan, the Lexington Clipper-Herald reported.

According to the report, a jury composed of 10 women and two men on Friday returned the not guilty verdict against the physician after deliberating for just under five hours.

The shooting took place when Kathleen, her husband, and their two young sons on June 17, 2020 were driving on Interstate 80 on their way to Scottsbluff, where the family was moving so Kathleen could continue her medical residency. Kathleen and Joshua were reportedly arguing when Joshua pulled the vehicle to the side of the freeway and called a friend to help mediate the conversation. During the call, Joshua reportedly turned towards Kathleen with his arms raised “like he was going to strike her,” and gave her “a look” she claimed to recognize from previous instances of physical abuse.

Kathleen then grabbed a handgun from the center console of the pickup truck and fired two fatal shots into Joshua’s chest.

Dawson County Attorney Liz Waterman told the jury to consider the terms “fear” and “rage” when assessing whether Kathleen shot her husband in self-defense, Omaha NBC affiliate WOWT reported. She argued that the evidence pointed to Kathleen acting out of rage, not fear, when she killed Joshua, noting that she told a responding officer that she “just wanted out” of the relationship.

“The defendant has a shaky relationship with the truth,” Waterman reportedly said during closing arguments, adding that Kathleen’s credibility was “at the center” of the case.

Testifying in her own defense earlier in the week, Kathleen reportedly provided a detailed accounting of the alleged abuse she suffered at the hands of her husband of nine years.

Per the Clipper-Herald,  Kathleen specifically emphasized an August 2015 incident in Grenada during which Joshua allegedly held her down on the floor and poured alcohol down her throat. He then allegedly urinated on Kathleen before dumping baby powder on her face and and strangling her as punishment because she refused his order to get undressed. She said his demeanor before the shooting was the same as when he’d previously harmed her.

“As he was pulling over he turned at me, gave me that look that I had seen in Grenada, raised his arm, came at me and that’s when I grabbed the gun and pulled it twice,” Kathleen said in court, Omaha ABC affiliate KETV reported.

Kathleen further testified that the abuse was endemic through the duration of their marriage. She reportedly said that Joshua forced her to cut off communication with her family and friends, demanded the passwords to all of her electronic devices, used GPS to track her movements, and demanded that she gratify him sexually as a form of punishment.

Prior to moving, Joshua reportedly threatened to stay in Washington state with their two children unless Kathleen signed a contract promising to give him 30-percent of her income while she was in medical school and 50-percent of her income thereafter. Other contractual requirements included allowing Joshua to have “unlimited sexual intercourse access with her,” the Clipper-Herald reported. Joshua required Kathleen to sign the contract and have it notarized, which she did, reportedly telling jurors it was because “I wanted to see my children.”

Kathleen reportedly said it was fear of losing her children that also kept her from reporting the previous instances of alleged abuse.

Kathleen’s defense attorney, Brian Davis, reportedly referred to his client as a “battered woman” who was only trying to do what was best for her and her children.