Esther Callejas Shot 2 Young Kids to Send Them to Heaven

Arizona Mother Shot Her Two Young Children Because ‘She Wanted Them to Go to Heaven’: Police 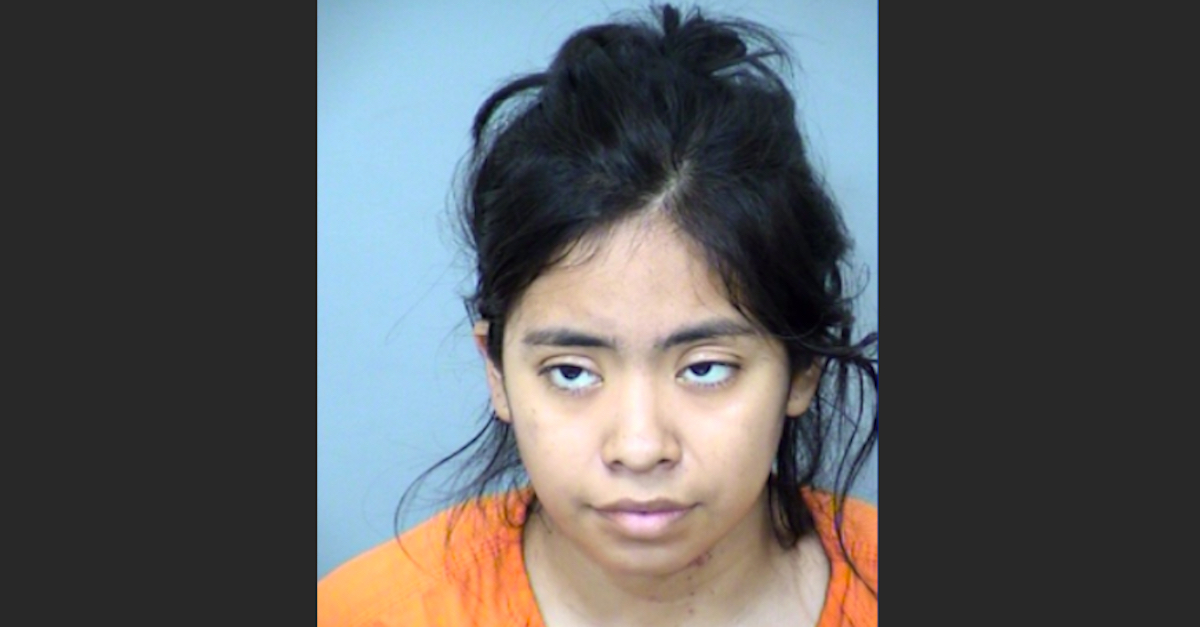 An Arizona mother was arrested after police say she shot her two children multiple times, killing one and severely injuring the other. The murder suspect said wanted her children to go to heaven, authorities allege.

According to the report, a man — later identified as Callejas’ husband Emmanuel Isidro — called 911 and told dispatchers his wife had just admitted to him that she had shot their children. A second call reportedly came from the man’s sister, who soon after reported that her sister-in-law had just admitted to shooting the children.

Officers with the Phoenix Police Department on Monday responded to the couple’s home near 7th Street and Broadway Road at approximately 11:45 a.m. and came upon a grisly scene. First-responders reportedly entered the home and found three family members on the floor and bleeding from gunshot wounds.

The 2-year-old girl was reportedly found unresponsive and not breathing. She had no pulse when an officer checked. Per KTVK, the police report stated that the baby suffered a gunshot wound to the chest. Police performed CPR on the child until an ambulance arrived.

The 6-year-old boy was reportedly found crying next to his sister and bleeding profusely after taking bullets to his head, torso, and left arm.

Callejas was reportedly bleeding from her left hand.

The children were rushed to the emergency room where the little girl was pronounced dead and her older brother was sent for emergency surgery in critical condition.

Court documents obtained by KTVK reportedly stated that an officer at the hospital heard Callejas say that she was supposed to protect her children but had actually done the opposite. Police executed a search warrant at Callejas’ home and reportedly recovered several cartridges for a .38 Special handgun and multiple bullets that had not been fired. Investigators reportedly said they believe Callejas loaded and shot all six bullets the gun holds.

Callejas had purchased the weapon several years ago but kept it hidden from her husband, the Arizona Republic reported.

In an interview with police, Callejas reportedly said she had been depressed and on prescription drugs.

“During an interview with police the following day, she admitted to shooting both of her children because she wanted them to go to heaven,” Sgt. Ann Justus said during a press conference addressing the shooting. “She told detectives she planned on killing herself after, but she was unable to reload the gun.”

When Callejas couldn’t reload the weapon, she reportedly took the remainder of her prescription medication and called her husband and sister-in-law. Callejas did not call 911.

The police department said the horrific nature of the crime had left multiple officers “shaken up.”

“You can imagine, something nobody should have to see our officers see it again and again,” Justus said. “Behind the badge, our officers are people. At the end of the day, they are people first and they have human emotions so when that’s happening they’re able to put that aside, they’re able to get the job done but then when reality hits them it can hit really hard. It’s not normal to see a child shot. It’s not normal to do CPR on a baby who is shot by a parent.”

Callejas was booked into the Maricopa County Jail and her bond was set for $2 million. She is scheduled to appear in court Oct. 5.