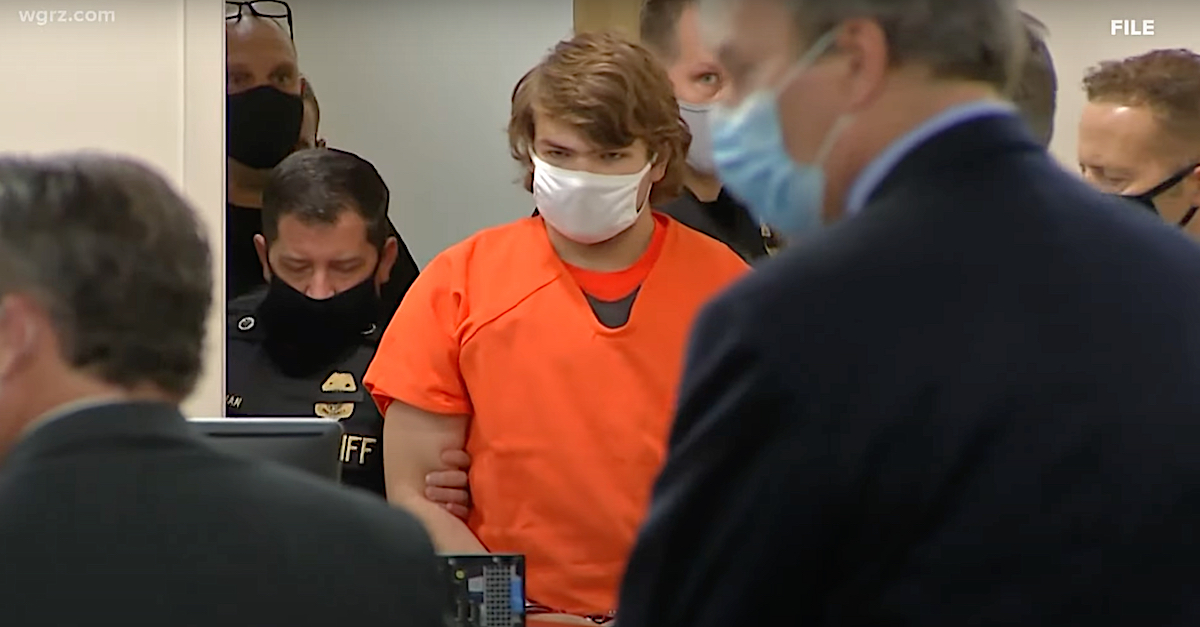 Payton S. Gendron, 18, the white man accused of perpetrating the racist massacre of 10 Black men and women at a grocery store in Buffalo, New York earlier this month, will be the first person ever charged under New York State’s novel domestic terrorism motivated by hate law, officials said on Thursday.

A grand jury handed up a full indictment on Wednesday, June 1. The defendant was charged via that document with 25 separate violations of state law — including 10 counts of murder in the first degree. Gendron was arraigned on Thursday in Erie County Court.

Flynn said there were “obviously” several additional charges that could have been leveled against the defendant when he was arrested but that it was imperative to get Gendron off the street, detained, and in custody as soon as possible. So, prosecutors initially went with the charge that was staring them “right in the face,” the DA said.

The sole initial charge was, in essence, a very serious yet strategic placeholder which allowed the authorities to prepare and present a broader indictment to a grand jury.

In addition to the newly levied ten counts of first-degree murder, the alleged racist killer is now also charged with multiple counts of murder in the second degree and attempted second-degree murder as well as one count of criminal possession of a weapon/loaded firearm other than a handgun.

The charge of domestic terrorism motivated by hate is a relatively new feature of law in the Empire State — as is the state’s overall domestic terrorism statute, which also happens to be the first suite of such laws in the nation. Signed into law in April 2020, the Josef Neumann Hate Crimes Domestic Terrorism Act went into effect in November 2020. Proposed in response to a mass shooting at a Walmart in El Paso, Texas during the summer of 2019, the legislation was named after a rabbi was murdered during an antisemitic machete attack at another rabbi’s home on the final night of Hanukkah.

The law itself reads, in relevant part, as follows:

A person is guilty of the crime of domestic act of terrorism motivated by hate in the first degree when, acting with the intent to cause the death of, or serious physical injury to, five or more other persons, in whole or in substantial part because of the perceived race, color, national origin, ancestry, gender, gender identity or expression, religion, religious practice, age, disability, or sexual orientation of such other person or persons, regardless of whether that belief or perception is correct, he or she, as part of the same criminal transaction:

1. causes the death of at least one other person, provided that the victim or victims are not a participant in the criminal transaction; and

2. causes or attempts to cause the death of four or more additional other persons, provided that the victims are not a participant in the criminal transaction; and

3. the defendant was more than eighteen years old at the time of the commission of the crime.

Gendron is the first person to ever be charged under the law. No one has ever faced charges under the statute to date, according to the Democrat & Chronicle, citing the state Division of Criminal Justice Services.  (Prosecutors in New York have previously tried other cases under different and earlier state-level terrorism laws.)

“That charge only has one sentence if, in fact, the defendant is found guilty,” Flynn said at the press conference with regards to the instant case under the newer law. “And that is life without parole. There is no minimum. There is no maximum. That is the only punishment on that charge.”

The DA went on to say that although one count of first-degree murder would have sufficed for legal purposes, he charged the defendant with 10 separate counts in order to list all 10 victims and send a message.

“Because they deserve to be listed by name,” Flynn said. “And he deserves to be held accountable for all 10.”

Each of the attempt charges were enhanced with a hate crimes component, the DA said, because that elevates their potential punishment to life in prison — the same maximum punishment for a first-degree murder charge. That decision was made out of respect for “the community” and “the victims,” Flynn added. It also gives the jury multiple avenues via which to convict.

“I will note that two of three victims who survived were white, they were not African Americans,” the DA continued. “I can still charge a hate crime on the attempted murder for two white people as well because of his alleged intent. So, I did.”

A gag order requested by the defense was granted. As part of an agreement, both sides will refrain from discussing the evidence and facts of the case in public. Flynn noted that Thursday’s press conference was the last time he would make a public statement on the prosecution. At least, presumably, until the trial is over.

The defendant pleaded not guilty on Thursday to the expanded indictment.

[File image via screengrab from WGRZ-TV.]