Willie A. Burton Acquitted of Kye Freeman Murder in Alabama 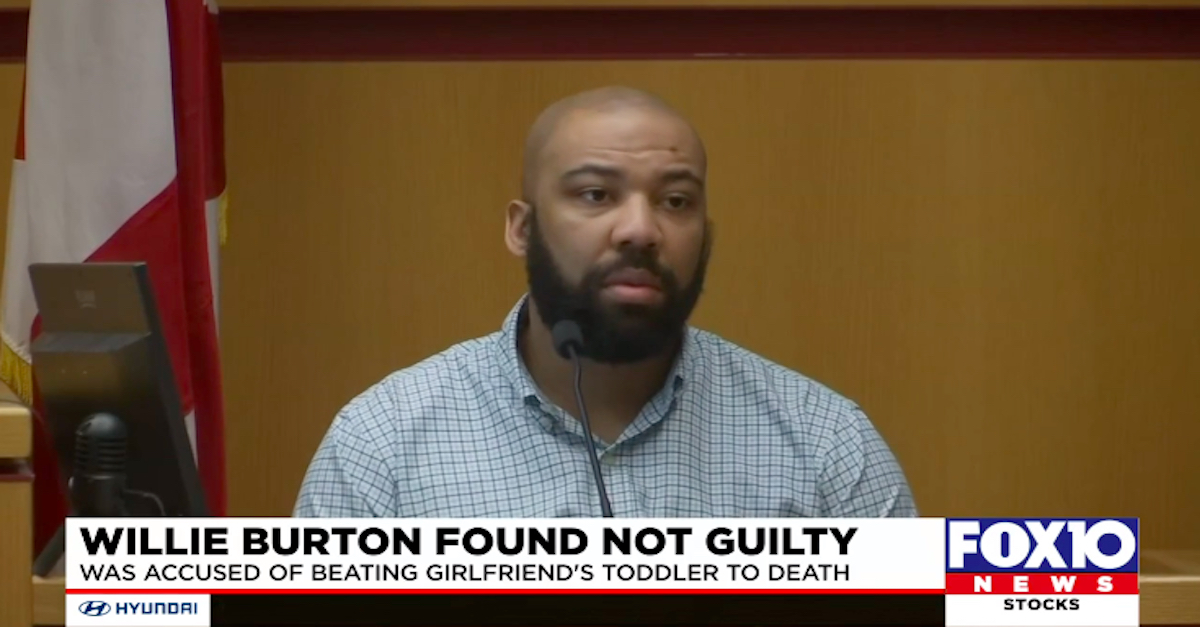 Willie A. Burton testifies during his murder trial.

An Alabama man facing a capital murder charge after being accused of beating his girlfriend’s toddler to death was acquitted by a unanimous jury on Friday. The Mobile County Circuit Court jury returned a not guilty verdict for Willie A. Burton just one day after he took the stand and told the court he “popped” Kye Freeman, 2, at least twice in the hours before his death, FOX affiliate WALA-TV reported.

Prosecutors argued that Burton grew frustrated while potty training the boy and brutally beat the child while his mother was at work in August 2018, the television station said.  But Burton took the stand to testify in his own defense on Thursday; he admitted that he struck the child on the backside but denied taking part in the abuse that led to Kye’s death.

“I popped him because he got off the toilet,” Burton reportedly said during the trial. “I grabbed him by the hand, and I popped him on the butt and put him back on the toilet.”

Burton reportedly said he then went outside and smoked a cigarette. When he returned, Kye had again gotten off of the toilet. Burton said he “popped” the boy again. However, Burton was adamant that he only struck the child on his buttocks.

Evidence established during the trial showed that Burton was not the only adult in the home when Kye suffered life-ending injuries. The boy’s mother, Keijon Hoyt, had reportedly gone to work for the weekend and left her son and Burton at home with sister and several other adult relatives.

Earlier in the week, a medical examiner reportedly testified that Kye had sustained blunt force trauma to the head and abdomen that appeared to be the result of a non-accidental act. The blows reportedly caused the child’s intestines to tear open, sending him into shock.

Per WALA, Burton’s attorney, Jeff Deen, “insinuated that one of the other adult relatives of the victim who were living in the house on Elmo Avenue must have been responsible” for inflicting the injuries on Kye.

Mobile County Assistant District Attorney Louis Walker reportedly pressed Burton on allegedly conflicting statements given to police after Kye’s death. Walker suggested that Burton told investigators he “whupped” Kye and “popped” him on the hand or legs. But Burton reportedly testified that wasn’t what he originally said.

“I denied whupping his ass,” Burton responded, and again reportedly claimed he only hit the child on the buttocks.

The mother of Burton’s children reportedly testified for the defense and said she had never seen him get violent with their kids and Burton said he had no previous history of child abuse.

Deen told the station his client was emotionally overwhelmed following the jury’s decision.

“He is very emotional, he’s been locked up for three years without bond because of this charge,” Deen said. “Cause when you’re charged with capital murder you’re not entitled to a bond. Plus just the charge in and of itself a child being killed, it’s devastating for him. He’s very close to the kid, took care of him, tended to him — and to be charged with murdering it and is sitting in jail this long . . . yes he broke down crying in the back.”