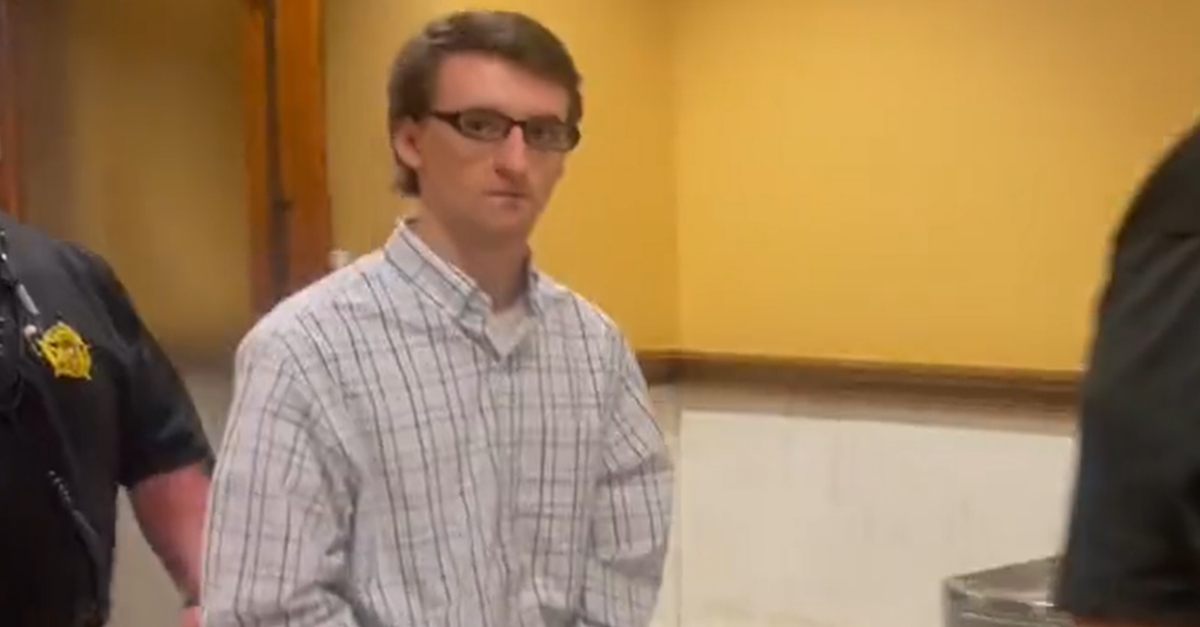 Mason Wayne Sisk being led out of court after his mistrial.

An Alabama judge has declared a mistrial for a 17-year-old boy who allegedly massacred parents and three siblings.

The issue in this capital murder case stemmed from the phone of Mason Wayne Sisk’s adoptive mother Mary Sisk, 35, according to local reports out of Limestone County, Alabama. Though authorities were not able to access the device in the years following incident, the defense noted that they only recently discovered that FBI agents managed to unlock it and sent it to them.

Judge says last week the phone was accessed. But there hasn’t been enough time for the defense to review the files.

Defendant Sisk, then 14 and now 17, allegedly shot Mary Sisk, his father John Wayne Sisk, 38, his brother Kane, 6, sister Aurora, 4, and brother Colson, 6 months old, in the head on Sept. 2, 2019, say prosecutors. The state presented messages of Mason confessing to his then-girlfriend and a friend during the pretrial period, according to WHNT reporter Dallas Parker. He also allegedly said he wanted to become a contract killer.

She tells him no.

He says “I am good with a gun, I killed my family in less than 4 seconds. All head shots.”

Authorities said the murder weapon was a gun allegedly stolen from a family friend.

The defense reportedly asserted during opening statements that the prosecution’s story did not make sense and that there was no evidence of planning, according to WHNT reporter Brian Lawson. The defense reportedly said Mason Sisk was not given his Miranda warning for two hours and 11 minutes. The defense attempted to cast further doubt on the case, noting that the murders were committed with precision. Sisk had no real firearm experience, the defense said; also, no one knows who stole the murder weapon.

Trial testimony cast John Sisk in an ugly light, even though he was one of the victims in this mass murder. Mason’s former girlfriend said the father was physically abusive toward his son, including grabbing him between the legs until he fell to the ground, fighting his son, yanking Mason out of a vehicle and striking him on the back of the head. She described verbal abuse in the residence, and her parents eventually forbid her from visiting Mason.

A woman who said she knew Mason Sisk from his childhood described John Sisk as a controlling and mean, and she was surprised Mary stayed in the relationship.

Watkins: I described John as controlling. Mary worked and a lot of times he did not. He was just degrading to her. He was more than mean. That’s me looking from the outside in. I was very surprised that she was still with him.

Defendant Sisk declined to comment after court, only shaking his head when he asked if he had anything to say.

Sisk offered no reaction to the mistrial. @whnt pic.twitter.com/TdlHlPZ5eU