Airline Passenger Charged for Taking ‘Full Swing’ at Female Flight Attendant and Hitting Her in the Face with ‘Closed Fist,’ Feds Say 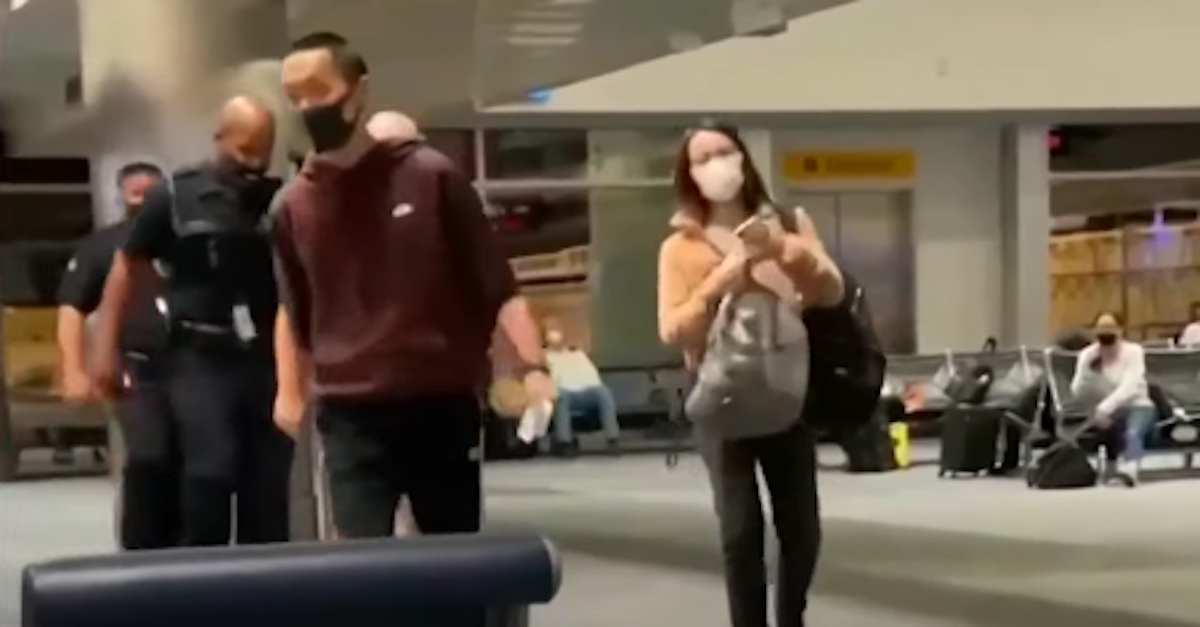 Brian Hsu being escorted out of the airport in Denver by police.

A California man was arrested on Monday after federal authorities say that he physically assaulted a flight attendant midway through a trip from New York City to Santa Ana, causing the plane to make an emergency landing in Denver.

Brian Hsu, of Irving, was charged with one count each of interference with a flight crew and assault within the Special Aircraft Jurisdiction of the United States, court documents state.

According to a criminal complaint filed in U.S. District Court for the District of Colorado, American Airlines flight 976 departed from JFK International Airport and was bound for John Wayne Airport when, approximately halfway through the trip, Hsu allegedly assaulted a female flight attendant. In a report filed by the Denver Police Department, officers called to the scene said they saw the injured flight attendant, referred to in the complaint as “the Victim,” after the plane landed and observed that she was “bleeding from or around her nose.”

An FBI agent with the Joint Terrorism Task Force in Denver also responded to the scene and conducted interviews with four of the passengers who were seated in the immediate vicinity of the assault, which allegedly occurred just outside of the lavatory.

The witnesses allegedly said that after the assault, Hsu was asked to sit down by another flight attendant and “did not immediately comply.” Other passengers on the flight initially “restrained Hsu with duct tape and later plastic bonds,” a witness told the FBI.

Several of the witnesses made comments about Hsu’s “odd behavior” both before and after the incident, documents say. One witness said that throughout the flight he had been getting up and “stretching an unusual amount.” Others said he was “squirming” his hands and referred to him as “unusually calm.”

During an interview with the FBI, Hsu said he was returning home to California after undergoing brain surgery in Rhode Island to reconstruct portions of his skull after he was assaulted in the fall of 2020.

“HSU reported psychological damage from the injury, including ringing in his ears, nausea, dizziness, and loss of balance,” the complaint states. “He also stated that he is now sensitive to sound and sometimes experiences a mental ‘fog,’ during which thinking is difficult. HSU said his parents think he acts differently than he used to.”

Hsu allegedly told the FBI that he had gotten up to use the lavatory and was stretching in the aisle of the plane when he accidentally bumped the flight attendant with his hand. He claimed the she “became agitated and began swinging at Hsu’s head with her hands,” which scared him because an impact to his head could be deadly.

“To prevent the Victim from striking his head, Hsu claimed that he backed up towards his seat and raised his hands defensively, with his palms facing outward,” the complaint states. “Hsu then stated that the Victim charged at him and hit her nose against the palm of his right hand.”

Hsu was traveling with his mother, who reiterated to the FBI that her son had just undergone brain surgery and couldn’t sit still and often acted out since he was assaulted.

The flight attendant said that after Hsu accidentally struck her while stretching, he said he needed to use the bathroom. She allegedly told him it was occupied and he had to wait in his seat because the pilot had turned on the “fasten seatbelt” sign.

“The Victim advised that the male passenger raised his arms as though he were going to stretch, but then brought his elbow down and struck the Victim on the head. The Victim then took a defensive posture with her arms out in front of her and her hands up. A that point, the male passenger initially backed down but then charged at her, flailing his arms,” the complaint states. “This caught the attention of another flight attendant, who came to assist. The male passenger backed down again, but when he charged at the Victim this time, he struck her in the face with the closed fist of his right hand.”

She was taken to the hospital and diagnosed with a concussion. Doctors said they could not determine if her nose was broken due to the swelling.

“Acts of violence against our team members will not be tolerated by American Airlines,” American Airlines said in a written statement. “The individual involved in this incident will never be allowed to travel with American Airlines in the future, but we will not be satisfied until he has been prosecuted to the full extent of the law. This behavior must stop, and aggressive enforcement and prosecution of the law is the best deterrent.”