‘He Assumed a Leadership Position’: Judge Orders Detention for Mississippi Man Who Went to Mexico Shortly Before Jan. 6-Related Arrest 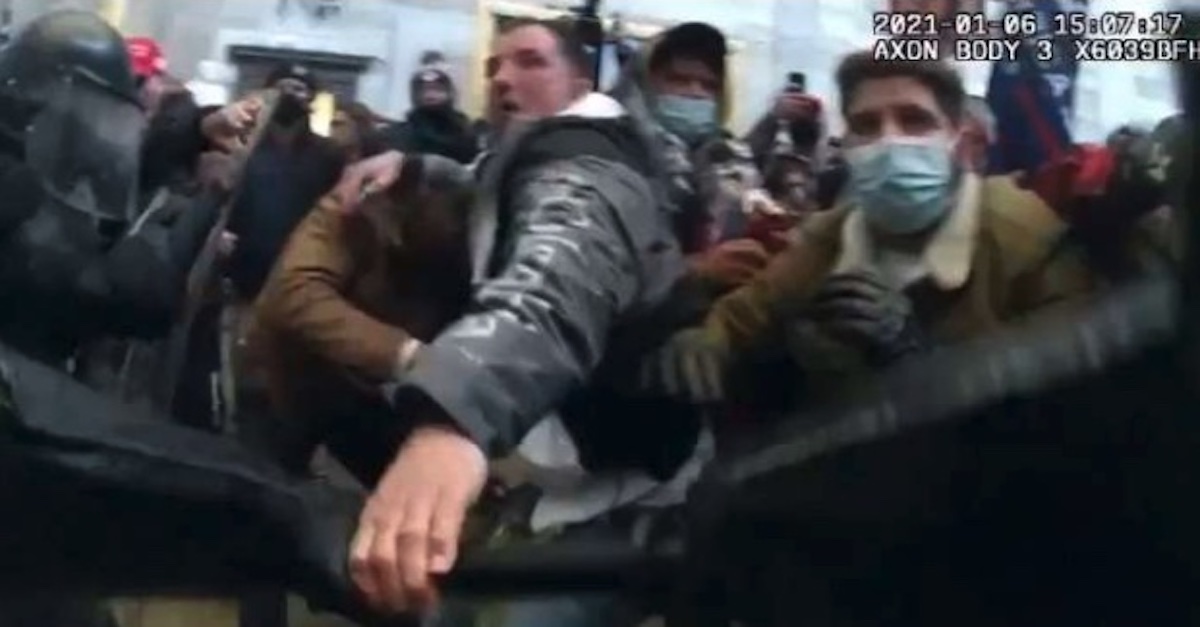 A Mississippi man who traveled to Mexico while on probation for another offense days before before his arrest for allegedly assaulting law enforcement on Jan. 6 must remain in jail, a federal judge ruled on Tuesday.

Chief U.S. District Court Judge Beryl A. Howell denied a change of bond request Tuesday from James Burton McGrew, who traveled to Washington with his mother to attend Donald Trump‘s “Stop the Steal” rally on Jan. 6.

Some months later, the FBI arrested McGrew on May 28, alleging that he assaulted members of the U.S. Capitol Police. Prosecutors say he took a trip to Mexico from May 23 to 24, despite the fact that he was supposed to be on probation in connection with unrelated state cases in Mississippi.

“The Front Lines of the Mob”

Howell said that the evidence showed that McGrew was not just a bystander or passive participant at the U.S. Capitol building that day, along with thousands of other Trump supporters looking to stop the certification of the results of the 2020 presidential election, but that he was a major agitator.

“All told, the defendant managed to make his way to the front lines of the mob at several points,” Howell said. “The defendant seemed to be suffering from the effects of chemical spray, and he was not discouraged from engaging in the conduct. He seemed to be encouraged by the mob, he seemed to lead the mob, giving them instructions to lock arms to hold against the police line.”

Government filings allege that McGrew can be seen on video yelling things like “Four more years,” “Let’s go, we need more people,” and “Come on, come on” at various locations around and in the Capitol building. He was also heard saying to law enforcement: “Y’all are with us, not against us. They want to defund the police, you know that right? They are going to take your fucking job from you and you’re fucking defending them.” He also repeatedly called the officers traitors, and said there were two million people outside fighting to get into the building.

At one point, the government said, McGrew filmed police officers on his phone, shouting their badge numbers and their names, after yelling at them things like “We’re coming in here, whether you like it or not.”

“He enthusiastically participated in a violent assault on the Capitol,” Howell said. “He assumed a leadership position in that. He engaged in not just verbal altercations with law enforcement, but physically tried to break up police lines, and tried to lead others to join him in breaking police lines, to break into the Capitol for whatever his political aims were that day.”

“This Is Not Just About 12 Seconds”

McGrew’s lawyer, William Lee Shipley, argued that the government’s evidence showed that, at most, McGrew engaged in possible criminal behavior for just a few seconds, when he is seen on video lobbing a pole or railing in the direction of law enforcement.

Howell clearly disagreed with Shipley’s characterization of McGrew’s actions, reminding him that video showed his client at the front of the line at multiple points around the Capitol building, getting into aggressive verbal and physical confrontations with law enforcement, and helping lead the rioters in breaking through police efforts to secure the building.

“That distilling [of] six months of detention and attributing that to 12 seconds only of throwing a pole with sharp things at the end at a defensive line of police officers is a bit of an understatement loses the full context of the preceding two to three hours of video recording of Mr. McGrew’s conduct that day,” Howell said, interrupting Shipley. “This defendant [was] encouraging, saying ‘Let’s go’ almost 14 times, ‘Let’s go, let’s go,’ encouraging other members of the mob to break into the Capitol building—this nation’s Capitol building [. . .] I see aggressiveness not just verbally but physically throughout the whole afternoon.”

“This is not just about 12 seconds, Mr. Shipley,” Howell added.

“It’s Serious to This Court”

Howell said that Mississippi’s response to McGrew’s travels are all but irrelevant to her decision in this situation, even though she was skeptical that he wasn’t actually in violation of his probation.

“It may be that in Mississippi it’s not serious, but it’s serious to this court, and I don’t know of another colleague on my court who wouldn’t also find it to be a very serious issue,” Howell said. “I do find it a little hard to believe that they’re so lax in Mississippi that they just let people willy-nilly who are on supervision travel outside the country without permission and don’t view it as a violation. I find that very difficult to believe.”

Howell, appointed to the bench in 2010 by Barack Obama, has been outspoken in her frustration with the way some of the Jan. 6 cases are being prosecuted.

“No wonder parts of the public in the U.S. are confused about whether what happened on January 6 at the Capitol was simply a petty offense of trespassing with some disorderliness, or shocking criminal conduct that represented a grave threat to our democratic norms,” Howell said at a hearing in October. “Let me make my view clear: The rioters were not mere protesters.”

You can read the government’s complaint and opposition to McGraw’s request for bond, both of which detail the allegations against him, below.